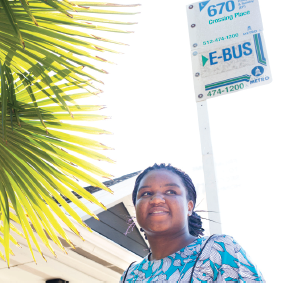 Last year, social work major Danielle Redhead got tired of shuttle delays on Cap Metro route 670. The UT shuttle serves Riverside, where many low-income students and students of color live, according to Redhead. After June, when Capitol Metro rearranged routes, the delays worsened and led to severe overcrowding.

As the social work representative in Student Government, Redhead attended Cap Metro board meetings, met with key stakeholders, and wrote an opinion piece in the Daily Texan. In early January, as a result of these advocacy efforts, the shuttle went back to its original route, and stakeholders are monitoring results to implement further improvements.