You are here: Home / Features / The power of human interaction

As Texans, we see the consequences of immigration detention from up close. Our state shares the expanse of its southern border with Mexico and holds a high number of detention facilities. As social workers in this region, we work closely with migrant individuals and families who endure the direct or indirect results of detention. We also uphold a code of ethics and professional directives that require us to be informed about, engaged in, and actively resisting inequity and oppression.

On any given day, more than 40,000 migrating individuals are detained, according to Immigration and Customs Enforcement (ICE) statistics for 2020. They are incarcerated in facilities managed by an entanglement of governmental and private entities including ICE, Customs and Border Protection, and private prison corporations

Depending on each case, immigrant detention may last a few days or be indefinite. The consequences of either are often long-lasting. The harmful impact of incarceration on individuals and families is well documented and includes increased risk of self-harm, suicidal ideation and suicide attempts, depression, traumatic stress, and anxiety. Detention also causes disruptions to the family unit, can create role reversal between parents and children, and undermines attachment relationships critical to child development and family well-being.

In 2016, faculty and student volunteers from the Steve Hicks School of Social Work  and St. Edward’s University began working with incarcerated parents and children at Karnes County Residential Facility. This is an ICE detention center located outside of San Antonio and run by the GEO Group, one of the nation’s largest for-profit prison operators. The volunteers’ goal was to support the efforts of RAICES, a nonprofit providing parents at Karnes with immigration information and resources.

The volunteers focused mostly on helping parents understand the purpose and logistics of credible fear interviews. Through these interviews, immigration officials screen individuals charged with inadmissibility under the Immigration and Nationality Act to prevent those who may be eligible for asylum from being wrongfully removed. Essentially, by telling their stories during the interview, individuals have to show that there is a credible fear of danger to their lives if they are returned to their home countries. These stories generally involve traumatic experiences that migrants may not have processed or may have difficulties recounting to a stranger in an environment often perceived as hostile, such as immigration detention.

Volunteers were able to use clinical skills such as empathy, active listening, and social perceptiveness to help migrants articulate their stories while validating them. For instance, during an interview with a mother from Guatemala, the social work volunteer was able to establish rapport and ask questions that uncovered a long history of domestic violence—a relevant piece for her asylum case—that otherwise would have gone unnoticed.

Over time, the effort from social work merged with a parallel effort from the UT Austin School of Law into a joint project with shared coordination. Through this ongoing effort, once a month volunteer students from social work and law pile up into a van, make the trip to Karnes, and spend the full day supporting RAICES efforts by assisting with credible fear interviews and other tasks. The overall objective of the joint project is to build capacity, cross-train, and utilize legal and social work clinical expertise to best serve individuals detained at Karnes.

From a social work perspective, one of the major challenges the team faced was how to address trauma in the context of immigration detention.

A trauma-informed approach first has to understand and acknowledge what trauma is, its effects, and how widespread it is. Second, it has to acknowledge individuals’ capacity of healing from trauma and understand different ways of responding appropriately when someone has a traumatic response.

At Karnes, the team of social work volunteers has focused on providing a sense of support and wellbeing in a space that often does not feel safe for those detained. Based on recent research and our experiences in the detention facility during these past three years, we share four main ways of operating in a trauma-informed manner despite a setting that is isolating and often serves to reproduce trauma.

Physical and psychological safety, as defined by those who’ve experienced trauma, may not be possible in the detention center as a result of the constant threat of deportation. In addition, frequent intercom calls for individuals by their inmate number, night-time bed checks, and cases of sexual harassment, sexual abuse, and even death while in detention enhance the climate of instability and danger.

One way of promoting well-being in this hostile environment is the strategy of grounding exercises—something as simple taking a few minutes to guide clients through feeling and relaxing different parts of their bodies, and breathing. These are techniques designed for trauma survivors who may feel distress, re-experience trauma, and have difficulty regulating their responses. Social work volunteers at Karnes have found that grounding exercises helped migrants find calm, center in the current time and space, and prepare for re-entering a fear-inducing system. Many of the migrants had never experienced an activity like that, and found the short exercise relieving—as one mother put it, “Sentí un desahogo” (“I felt relieved”).

With clients who will be returned to their home countries and may face considerable danger upon arrival, the team helps them identify resources and put together a safety plan.

Finally, working inside immigration detention facilities also offers an opportunity to identify abuses within the system and try to address them alongside a larger network of advocate organizations and immigrant detention visitation programs. For example, members of the team have helped RAICES collect records of abuse from migrants detained at Karnes that may later be used as examples in potential lawsuits. Volunteers also drew from their experience at Karnes to submit testimonies to the Texas Legislature against the 2018 motion to license family detention centers as childcare facilities. 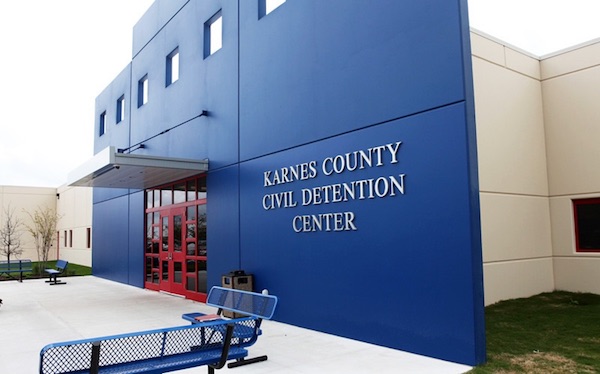 For maximum transparency, our team members always explain their roles, and the limitations to them. For instance, volunteers make clear that they don’t work for the detention center or the government, and that they don’t have information such as asylum interview dates or the state of their cases.

Volunteers are also mindful that their work in the facility happens within a patchwork of efforts by nongovernmental organizations that strive to provide the best information possible within systems that are not always transparent, and a rapidly changing legal and political context.

Traumatic experiences often leave people feeling as if they have little choice or control over what happens to them. In detention centers, this feeling is coupled with an atmosphere that removes most choice from daily living, including when to wake up, when to eat, which side of the hallway to walk on, and so on. When it comes to parenting, lack of choice becomes particularly poignant. Detention centers inhibit parents’ authority and decision-making related to their children’s sleeping, feeding, clothing, and disciplining. They also restrict parents’ responses to the social, educational, and medical needs of their children.

Within these restrictive parameters, our team members aim to recognize and give as much choice and control as possible to parents in detention. For example, they choose where to sit in a visitation room, when and what part of their stories to tell, and whether or not to have their child present during the visit.

Negative cultural stereotypes about immigrants are often reinforced in the detention context through, for example, insults by guards.

From a broader perspective, the system does not recognize or address the dehumanization and criminalization of migrating families in the public discourse, the histories of gender-based violence or trauma that detained individuals bring with them, or the historical contexts that pushed them to leave their home-countries.

In every interaction with detained individuals, our team members strive to incorporate an understanding of cultural differences, historical trauma, and gender-based violence. This is particularly important when helping individuals prepare for their credible fear interviews. For example, one of the volunteers was helping an indigenous woman from Guatemala at Karnes through the process of appealing the denial of her asylum case. When reviewing the transcript of her declaration before the judge, the volunteer realized that the woman had not brought up her story of domestic violence. When asked why, she said that in her country domestic violence was a private matter and not something that you would bring to the authorities. The volunteer was then able to bridge the cultural gap and explain that in the United States domestic violence was not only reportable but also relevant in the context of asylum law.

Within the limited context of immigration laws and policies, team members are also able to validate detained individuals’ lived experiences of oppression while providing guidance for how they can understand their unique histories.  To validate their fear as “credible,” regardless of what immigration and asylum law establish, is an important reinforcement of migrants’ humanity and rights.

When working to support migrants in detention, we often has the feeling  that we were not able to see enough people, do enough, or circumnavigate physical and legal barriers in effective ways. When it comes to the student volunteers in our team, we cannot dismiss the toll on them of entering such oppressive spaces and witnessing the daily undermining of human rights that occurs in them.

We recognize that immigration detention is a particularly challenging context to implement trauma-informed practices. But we also know, because we witness it through our work at Karnes, that every positive human interaction, no matter how small it may seem, has a powerful impact. This power is the underpinning of trauma-informed work in detention contexts, and is the basis upon which our student volunteers can understand the impact of their efforts.

Our work with student volunteers at Karnes during these past few years has yielded dozens of now graduated social workers armed with first-hand knowledge of the detrimental impact of immigration detention and the resolve to make systems change. We know they will accomplish this change through individual clinical work, community organizing, and policy advocacy with the hope of creating trauma-informed integrative systems of support for those seeking refuge in our nation.

Cook Heffron, PhD ’15, MSSW ’02,  is the director of the Social Work Program and an assistant professor at St. Edward’s University. Hernández, MSSW ’18, coordinates Girasol, a program at the Steve Hicks School’s Texas Institute for Child & Family Wellbeing that aims to create a global community of trauma-informed professionals working for the wellbeing of all immigrant families. A longer version of this article was published in Youth Circulations.