The University of Texas (UT) is excited to announce the formal addition of the UT Black Studies Archive to the Black Diaspora Archive held at the Benson Latin American Collection.

The progress made in those 53 years is evident by the wide variety of materials showing not only the growth made in that time period, but by whom that progress was made possible. The Ethnic Studies program did not come about without the hard work and dedication of many, and the collection starts with administrative documentation of the processes required to start the inception of these programs and centers. The exponential growth of classes about racial minorities within the Black Diaspora are shown from the first class available starting in 1971, through the course schedules for 2018.

Just as an archive is a collection of materials coming together to make a whole, so too was the process of creating the Ethnic Studies at UT. Crowdsourced information from other programs around the country helped pave the way for our own program and these correspondences are include in the collection. The directors’ papers include the classes they taught, their personal correspondence, studies, committee information, as well as the administrative duties they performed in their official capacity. Each director is responsible for the department getting to where it is today. Dr. John L. Warfield is special in particular because of the impact that he had on campus and in Austin by shaping into existence the entity that is now known as Black Studies, as well as his many accomplishments in academia and community organizing.

An item of particular interest is “The Blacks” Student Directory, 1970-1972. This item lists every Black UT Austin student as well as their address at that time. Now, this would be unheard of, but documents like these show the need for community in a predominantly white institution, and the ways that students were able to build that community. Furthermore, these materials provide documentation of Black student activism in 1972 as well as issues faced by minority students in 1973.This history of student activism is something that has carried on through the present day as is evident from this photo from a student demonstration photographs in 1997 with Senator Rodney Ellis.

Materials pertaining to the Heman Sweatt Symposium from 1983 through 2004 are also of particular interest. Mr. Heman Sweatt found himself at of a landmark Supreme Court ruling in Sweatt v. Painter when he sued UT Austin for not allowing him admission to the university’s law school. In 1950, the Court held that because the education Mr. Sweatt would receive at the alternative school proposed was not equitable, he had to be admitted to UT Law. Mr. Sweatt’s determination helped lead to the desegregation of all schools eventually in the buildup to Brown v. Board of Education in 1954. While Mr. Sweatt was the first Black man to attend UT Law, the environment proved too hostile, and he was unable to finish his degree. This symposium named in his honor celebrates his impact on not just UT Austin, but on American history as a whole. To this day, there is a building on campus named after the case’s defendant and former university president, Theophilus Shickel Painter.

For decades, Black studies has offered programs and events that address important issues. Two event posters that are of particular interest at this moment in history is one for a play in 2017 titled “Ocean” and a panel on life “Post-Fisher Post-Race,” in 2012. “Ocean” is about about Yemayá, the Yorúbá Orìṣà, who is considered the Mother of All and associated with pregnancy, childbirth, and menstruation. As Mother of All, she stands for how powerful Black womanhood is.  As affirmative action heads back to the Supreme Court, “Post-Fisher Post-Race,” is more relevant than ever. 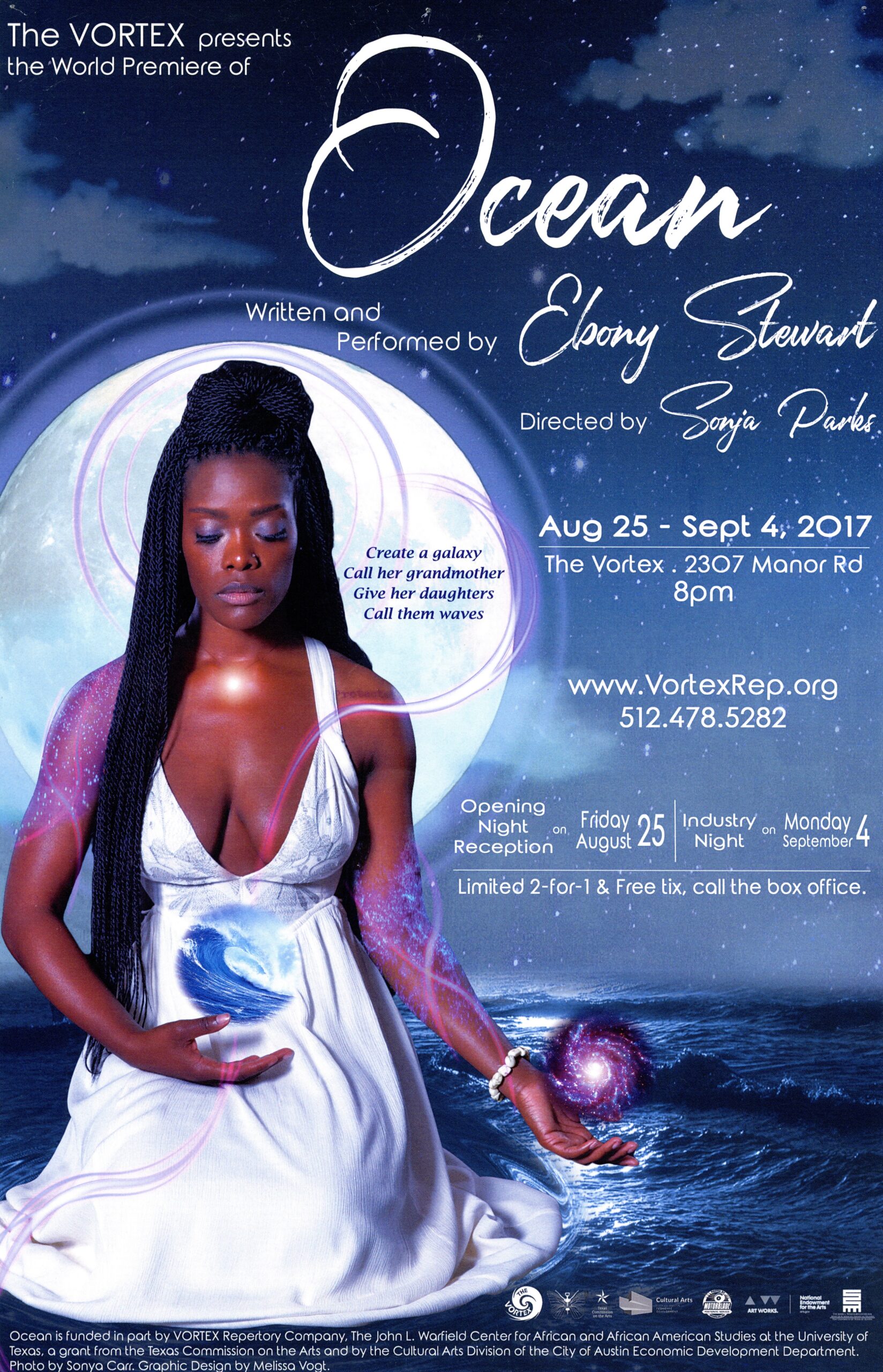 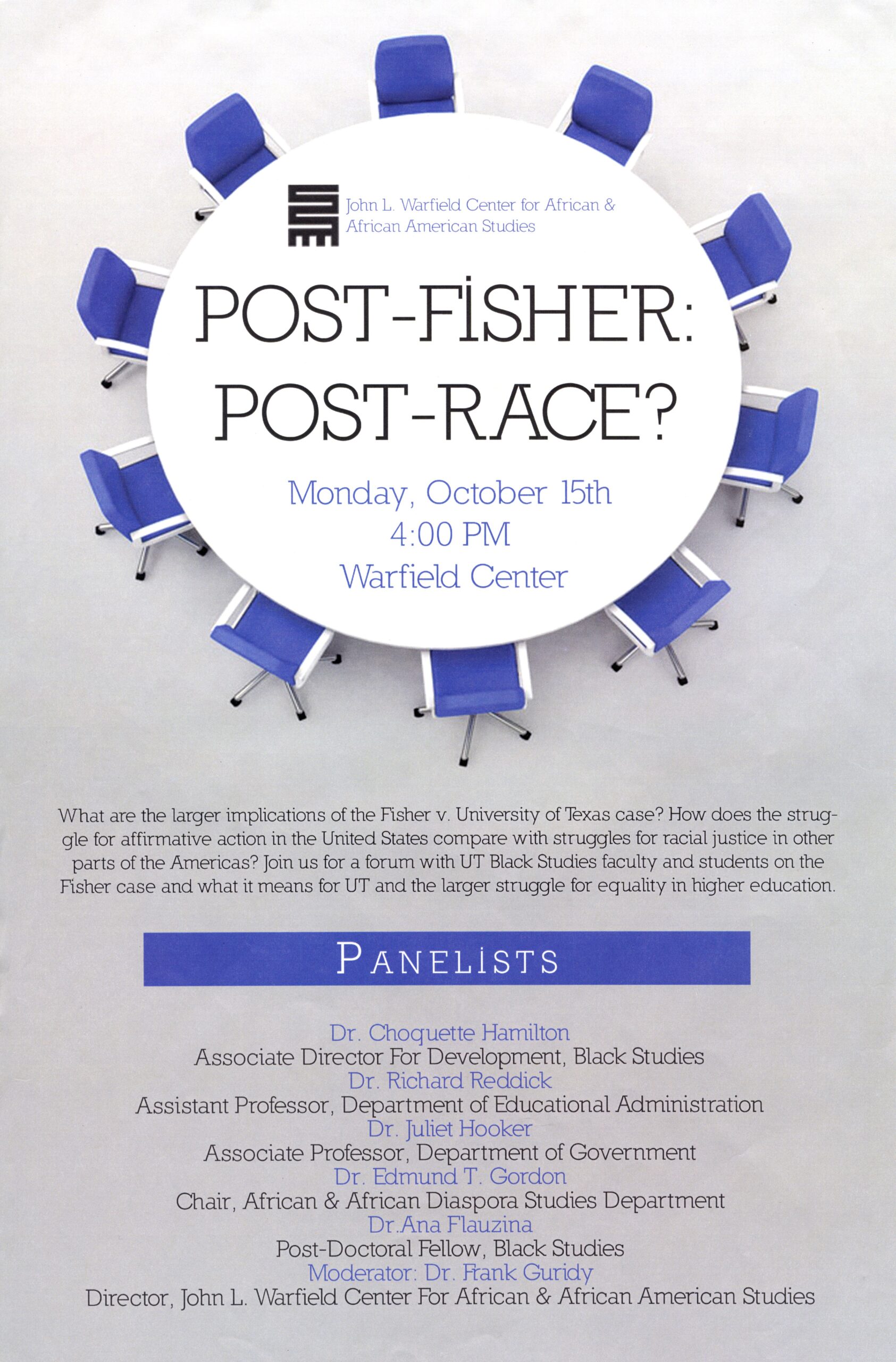 This collection is useful to anyone who would like to know the history of Black Studies at UT. It spans many years, people, and topics. As a minority-centered program, it is important to document its history because while it is integral to UT as a whole, it is not a history that has always been deemed worthy of being recorded.

David L. Johnson is a graduate student in UT’s MSIS program. He is a graduate of UT with a Bachelor of Arts in Women’s & Gender Studies and African & African Diaspora Studies. During his undergraduate career, David interned with the Black Diaspora Archive and assisted with the processing of the Black Studies Archive. After completing his undergraduate degrees, David completed his Juris Doctor at the Indiana University Maurer School of Law before returning to UT for his Master’s Degree. David hopes to empower minority education in the legal profession by becoming an academic law librarian.