You are here: Home / Background: Gentrification and Displacement

What do we mean by “gentrification?”

The term gentrification is usually traced back to its first use in London in the 1950s and 1960s to describe the influx of a new “gentry” into low-income neighborhoods. More recently, a Brookings report included this definition:

“…the process by which higher income households displace low income residents of a neighborhood, changing the essential character…of that neighborhood.”

This process includes three dimensions: 1) the displacement of lower income residents; 2) the physical transformation of the neighborhood—mostly through the upgrading of its housing stock and commercial spaces; and 3) the changing cultural character of the neighborhood. In the U.S., gentrification has most often—but not always—been applied to describe changes happening in declining areas characterized by poor physical conditions, concentrated poverty, and the racial segregation of people of color.3 In communities of color, poor conditions and disinvestment were the result of a history of public policies and private real estate practices that undermined property values and living conditions in these neighborhoods.

More recently, the term “gentrification” has been used more broadly to include any neighborhood that is becoming less affordable to current residents, regardless of the history of the neighborhood or the outcomes for residents. This more recent usage obscures the process underlying neighborhood change and also trivializes the different outcomes for members of nonwhite racial and ethnic groups and for neighborhoods with histories of systematic disinvestment.

Disagreements about definitions of gentrification relate to understandings of what drives the process of change, the benefits that such change can produce, and who receives these benefits. The current rise in prices in central neighborhoods is part of a broader inversion of the demographics of U.S. metropolitan areas, whereby the poor are pushed outward while the affluent are moving inward (Figure 1). In general, gentrification is more likely to occur in places where the housing stock is much more affordable than other places in the same city and where something has happened to change perception of the value of that location. 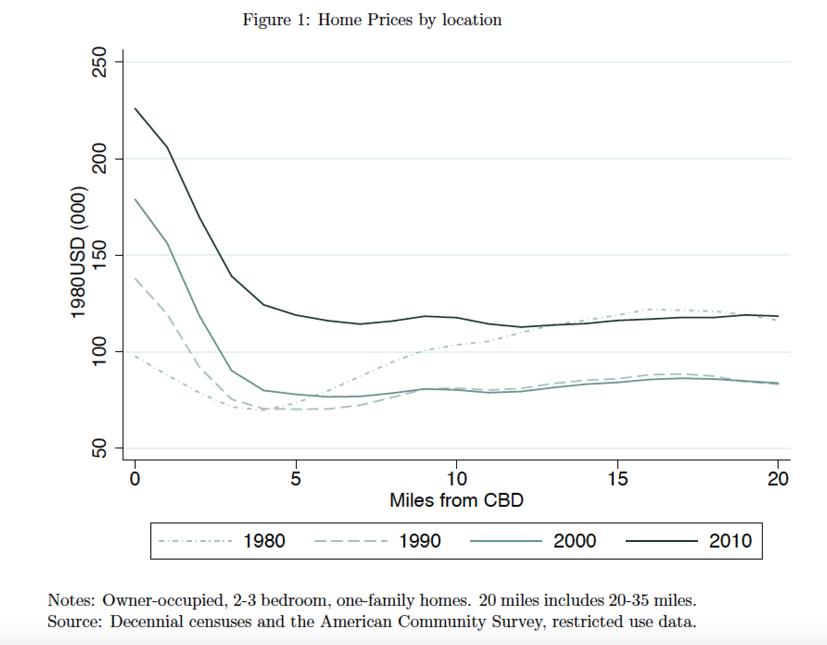 The relative importance of various factors in shaping why particular places are becoming more attractive to investors and to higher income residents is debated. Among the factors considered to be important are: changing preferences for central city living and the amenities that offers, city planning and economic development initiatives fostering redevelopment or new development in or near central neighborhoods, and federal initiatives to redevelop public housing as mixed- income communities.5 Also debated is whether new development that does not directly displace existing residents is part of the gentrification process or instead is a form of “re-urbanization” that should be viewed more positively.

There is no consensus on what gentrification is or even whether it is good or bad. But any reasonable person should be able to recognize that displacement is a matter of concern. This displacement has two dimensions: the stability of a neighborhood’s residential community and the harder-to-define culture or character of the neighborhood. We focus in this report on the former.

Several forms of residential displacement have been identified by scholars. Direct displacement of current residents occurs when (1) residents can no longer afford to remain in their homes due to rising housing bills (rents or property taxes), or (2) residents are forced out due to causes such as eminent domain, lease non-renewals, and evictions to make way for new development, or physical conditions that render their homes uninhabitable. Deterioration in conditions is often thought to occur mostly in neighborhoods where housing is of very low value. However, conditions can also decline when owners stop maintaining buildings while they wait for the right moment to sell them for redevelopment. While displacement occurs routinely in low-income neighborhoods, when displacement occurs in the context of changes in the physical and social character of the neighborhood, it becomes a characteristic of gentrification.

Cultural displacement occurs through changes in the aspects of a neighborhood that have provided long-time residents with a sense of belonging and allowed residents to live their lives in familiar ways. As the scale of residential change advances, and shops and services shift to focus on new residents, remaining residents may feel a sense of dislocation despite physically remaining in the neighborhood. This may also reflect the changing racial or ethnic character of the neighborhood—not just its class composition. This report is focused primarily on strategies for addressing residential displacement, but it is important for new city policies addressing displacement to also address this important cultural dimension of displacement.

Right to return and forward-looking inclusion

When understood as a process rooted in the uneven treatment of particular neighborhoods and racial and ethnic groups, addressing gentrification related to displacement requires attention to displaced residents, current residents, and also future residents. As we will discuss in later sections on potential solutions, some cities have attempted to redress displacement over time through “right of return” policies that focus on former residents who have been displaced from a neighborhood or current residents who are at risk of being displaced. At the same time, looking forward, it is important to ensure that in the future other low-income people will also be able to move into gentrifying neighborhoods, and that the scale of change does not erase key cultural aspects of neighborhoods that allow residents to feel like they belong.