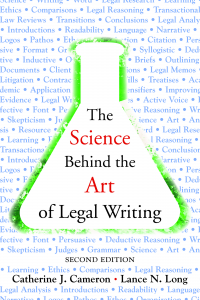 I highly recommend The Science Behind the Art of Legal Writing, an excellent book by Catherine J. Cameron and Lance N. Long, which just came out in a second edition. They’ve taken some truisms and common teaching  points from legal writing and done the research to see if those truisms and teaching points can be validated with science. For example—

It’s easy to read and full of good advice.

A survey of the advice on block quotations shows that it’s almost all negative: Don’t do it unless you must, say judges, legal-writing teachers, and experienced lawyers. So we should block block quotations? Why? Two main reasons.

Readers skip them. These readers include judges and their clerks. Admit it—you often skip block quotations when you read, too, so why would your readers be any different? If you put something important in a block quotation, you risk that it won’t be read.

They smack of laziness. Instead of paraphrasing, instead of summarizing, you used a block quotation—you copied and pasted. That’s the impression block quotations give, especially if you overuse them, and that perceived laziness turns readers off.

Despite these concerns, many well-written memos and briefs contain at least one block quotation and sometimes more. So the point is not to ban block quotations but to use them sparingly and effectively. Here are some recommendations.

Don’t ban block quotations; use them sparingly but well.

First, anything you block-quote must be vital. If statutory language is at issue or is crucial to your analysis, a block quotation is appropriate. And sometimes, block-quoting key statutory text can allow readers to get re-anchored in the relevant language by flipping or scrolling back to it without having to consult an appendix.

Likewise, if a binding case contains language of more than 50 words that’s directly relevant to your argument or powerfully persuasive for your position, a block quotation is appropriate. But if you harbor doubts about how vital the quotation is, you probably shouldn’t use a block quotation.

Even after you decide you need that quotation, try to shorten it to fewer than 50 words—just so you can avoid a block quotation. Yes, an embedded quotation of 49 words is still off-putting, but it’s more likely to be read because it isn’t a block.

Now, if the text is 50 words or longer and you’re certain you need it, edit it again so that when block-quoted, it’s not too long. No page-length block quotations, please. One thing more annoying than a block quotation is a long block quotation.

As you edit, show your alterations and omissions per Bluebook rules, but remember: heavy alteration or omission suggests that the quotation might be taken out of context, so go easy. One lawyer recommends that if you’ve heavily edited the block quotation, drop a footnote that contains the full text so readers can check your work.1

As a last step, write an inviting, persuasive lead-in to the block. The lead-in needs to show why the quotation is important or assert something the quotation will prove. In fact, it’s acceptable to paraphrase the quotation’s key point and use that paraphrase as a lead-in. Think of it like this: The lead-in should make the reader think, “Hmm. Is that so? Well maybe I should read this block quotation to be sure.” (Introducing quotations was addressed in this blog here.) One colleague suggested that the text after the block quotation might assert the key point, too. Readers who skip the block will still get the point—twice.

Are you going to strictly follow The Bluebook’s rule on length? In rule 5.2, The Bluebook says you must block only quotations of 50 words or more. But I say you can treat that rule as a recommendation, not binding authority. If you have a shorter quotation you’d like to highlight, you may set it off as a block if you wish.

Ultimately, you’re in charge of your block quotations, so use them sparingly but effectively.

Legal matters are often qualified: some conclusions might merit absolutely and certainly, while others deserve possibly and likely. So legal writers justifiably use qualifiers. In my last post, I discussed qualifying factual statements; here I discuss qualifying legal conclusions.

Relying on a survey of legal-writing textbooks, I can report that these are the most commonly recommended qualifiers for legal conclusions:

The most frequently recommended are likely and its forms, with probably coming in second.

Many of the textbooks surveyed discuss the traditional, predictive memorandum, in which a lawyer predicts an outcome that may be less than certain. But the same qualifiers are useful in other contexts, too—whenever a lawyer gives advice or offers a recommendation.

In fact, likely and its forms are part of a useful continuum from positive to negative certainty. At one end is a direct yes or will—a legal result will happen; the outcome is certain. At the other is no or will not. In between are likely and unlikely, which might be further qualified: highly likely, highly unlikely, and so on.

As with much writing advice for adverbs, adjectives, intensifiers, and qualifiers, the best advice is to avoid them when you can. Bryan Garner recommends that legal writers “toss out timid phrases.”[1] What’s more, he calls these qualifiers Fudge Words and offers as an undesirable example, “It would seem to appear that….”[2] That’s a trifecta: three Fudge Words in one clause: would, seem, and appear.

The urge to qualify is natural, but legal writers must be careful of “overhedging.” Granted that legal outcomes are rarely certain, we sometimes overcorrect and qualify too much. It’s a natural tendency, and novices might be particularly vulnerable.

In fact, a colleague in another state forbids his first-year law students to qualify conclusions at all. He believes it forces them to research carefully, analyze precisely, and write clearly.[3] But even if you don’t enforce a prohibition, it’s a good default: don’t qualify. For example (qualifiers are in boldface):

When you decide that you must qualify your conclusion, that you must hedge, do your best to explain why—immediately and concretely. Explaining has two benefits.

Readers benefit. Explaining why you qualified a conclusion serves clients and decision-makers. They already know that likely means better than 50-50 but not a sure thing. By explaining, you make your conclusion more concrete and empower them to ask additional questions or pursue other options.

Here’s an example that uses the qualifier likely and then gives a concrete explanation of why the writer qualified the prediction:

So set your default at no qualifications, but when you must qualify, be clear about why.

Inviting readers to read, not skip, your quotations

Legal writers often need to use quotations in persuasive documents. Quoting a reliable source adds credibility to your assertions and can relieve the reader of independently checking a source. In this column I’ll discuss a technique for formally introducing quotations that can enhance persuasive force and invite readers to read the quotation—not skip it.

Instead, I’ll address a formal lead-in to a quotation.

A common and traditional way to introduce a quotation is to use a lead-in statement and a colon, like these:

These forms are adequate but average. In their place, I recommend introducing the quotation with what we might call an informative or persuasive lead-in by asserting a point the quotation will prove. So don’t write this:

The technique works for block quotations, too. We all know that readers often skip block quotations. According to Mark Hermann, author of The Curmudgeon’s Guide to Practicing Law, “you must trick the judge into learning the content of the block quotation.”[1] He recommends summarizing the quotation’s substance in the lead-in sentence. And Bryan Garner, in The Winning Brief, offers similar advice: “For every block quotation, supply an informative, eye-catching lead-in.”[2]

So instead of this average lead-in:

The state board shall intervene in the operation of a school district to cause improvements to be made that will provide assurances of a thorough and efficient system of schools. Such intervention includes the authority of the state superintendent to fill positions of administrators and principals. [citation]

The state board shall intervene in the operation of a school district to cause improvements to be made that will provide assurances of a thorough and efficient system of schools. Such intervention includes the authority of the state superintendent to fill positions of administrators and principals. [citation]

The lead-in asserts a point and, to some degree, summarizes the quotation to follow. With this technique, according to Herrmann and Garner, you’ll get two payoffs. First, readers might read the block: the assertive tone of the lead-in invites them to read the quotation to see if you’re right. Second, even if readers skip the block, they still get the key content.

If you search “Neil Gorsuch writing,” you’ll find a number of sources describing new Supreme Court Justice Neil Gorsuch as a strong writer, a writer with flair, a writer with style. Justice Gorsuch has now written his first opinion for the Supreme Court, in this case: Henson v. Santander Consumer USA, Inc.  After reading it carefully and using some MS Word tools to assess it, I offer a few observations about Justice Gorsuch’s writing style.

Stripped of extraneous text and citations, the opinion has about 3000 words and 120 sentences, for an average of 25 words per sentence. That’s a good and readable average for legal writing, as I’ve written here before. The Flesch Reading Ease score is 44. That’s excellent because Supreme Court opinions average around 31.1 (The higher the number, the more readable the text.) And the Flesch-Kincaid Grade Level is 13, meaning a first-year college student should be able to understand the text. That’s pretty good too because Supreme Court opinions average about 14.5.2 Granted, the subject matter of the opinion—who’s a debt collector under the Fair Debt Collection Practices Act—wasn’t complex, and these statistical measures aren’t terribly meaningful, but they at least suggest that Justice Gorsuch tries to write readably.

Two other choices also convey the impression of a thoughtful writer who tries to write readably: Of his 120 sentences, he began 20 with a coordinating conjunction: and, or, for, but, yet, so. That’s a technique of an informal, readable style. So is using contractions, and Gorsuch used 17.

Justice Gorsuch has a few other writing preferences I find interesting.

He rarely uses traditional transition words (conjunctive adverbs) like however, moreover, furthermore, therefore, nevertheless, additionally, and so on. In fact, other than two uses of however, there are none.

Instead, he uses coordinating conjunctions, as mentioned, but he also uses phrases rather than single words, like these, all of which appear at the beginning of sentences:

But just as many of his transitions and cues appear mid-sentence, rather than at the beginning: