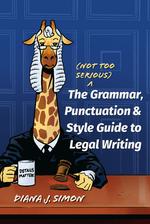 The (Not Too Serious) Grammar, Punctuation, and Style Guide to Legal Writing

It’s readable, practical, and engaging. I recommend it to legal-writing faculty, practicing lawyers, paralegals, judges, judicial clerks, and anyone who cares about legal writing.

Look for my book review forthcoming in Legal Communication & Rhetoric: JALWD in spring 2023.

The (Not too Serious) Grammar, Punctuation, and Style to Legal Writing is published by Carolina Academic Press.

I read a lot of legal writing, and I’ve begun to notice a decrease in three particular comma uses. Although I mostly read law-student writing, I’ve noticed these missing commas in some lawyer-written documents as well. (I should mention that I don’t believe that the writing skills of law students and young lawyers are in decline, and I’ll have more to say about that in another column.) In this column, I describe the three comma uses and advocate for saving those three commas.

Wrong: However Rei requests that the fee amount not be disclosed to the public.

Wrong: Therefore the court rejected and dismissed all the petitions before it.

This comma sometimes goes missing. Maybe writers are aiming for speedy reading or better flow and are thinking that a comma will slow things down. (It can be appropriate to omit the comma after an opening thus.) But the decreased use might also be occurring because writers are forgetting the rule. Let’s save this comma.

Wrong: Although both covenants began when the employment began they extended for different time periods.

Wrong: If the conduct occurred in the scope of representation then the conduct is shielded.

Wrong: Unless the court grants the petition for rehearing the original opinion is likely to stand.

This comma is sometimes omitted. For this comma, I’m less inclined to think it’s about flow and more inclined to attribute the decreased use to forgetfulness or hasty editing. But its absence can cause miscues and impose re-reading. Let’s save this comma.

3. Comma before and after appositives

An appositive restates or renames a noun it follows, and here we’re technically talking about a nonrestrictive appositive—which requires a pair of commas. Examples:

Wrong: The defendant, Chris Lang did not hire a lawyer.

Wrong: The vehicle in question, a red convertible with Louisiana plates was seen leaving the parking lot.

For clarity and precision, we need both commas. Again, I suspect that the decreased use arises from hasty editing—not from a change in the rule that applies in some other genre of writing such as literature, journalism, or college essays. Let’s save this comma.

You can help by retaining these three commas in your own writing. And if you’re invited to edit or comment on someone else’s writing, you can encourage the use of these commas—kindly and warmly, of course.

A criminal trial has ended and you’re at the penalty phase. If you’re Terry Chima’s defense lawyer, which would you rather hear the judge say?

Most readers believe that example 2 is more favorable to the defense, inferring that it suggests a shorter, less drastic penalty, while example 2 implies a longer, harsher one. But why?

It’s because of placement.

Most writing experts believe that the end of a sentence is a place of emphasis. The concept stated at the end stays with the reader and receives extra punch. “End sentences with a bang, not a whimper,” according to Joe Glaser, the author of Understanding Style.[2] And the writing expert David Lambuth says that “the end is emphatic because it makes the last impression. What we hear last is usually the most vivid to us.”[3]

Ending placement is the key difference in examples 1 and 2. As the defense lawyer, when the sentence ends with “warrants significant punishment,” I get a bad feeling in my stomach. But if the statement ends with “sincerely committed to being a productive member of society,” my hopes for a lighter penalty rise.

Here’s another example. Which sentence suggests that the writer is more peeved with the judge?

3. Although the plaintiff’s lawyer lied about his client’s injuries, the judge did not sanction him.

From example 3: The beginning subordinated clause is Although the plaintiff’s lawyer lied about his client’s injuries, and the ending main clause is the judge did not sanction him. Thus, the theory of emphasis through subordination goes like this: Typical readers give—

Even though subordination isn’t a magic trick, it can produce subtle emphasis in a sentence.

I recently read some writing advice offered by a capable lawyer with 10 years’ experience. The advice was offered in absolute terms, and I thought it was oversimplified. Here’s the advice with my own take.

In that post, I pointed out the drawbacks of the passive voice: that it can be wordy and dry and that it’s overused in legal writing. But I also acknowledged that it has its place. We shouldn’t forbid all passive-voice constructions; the passive voice has legitimate uses, and here are three.

1. When the doer of the action is unknown or irrelevant: The police were notified.

2. When the key focus is on the recipient of the action, not the doer of the action: Treyco’s account was frozen, not Mercury’s account.

3. To avoid the appearance of responsibility: The claim files had been deleted.

Again, my view is that for high-caliber, sophisticated legal writing, absolute prohibitions typically aren’t the best advice. Inform yourself about the advice, consider your audience and purpose, and exercise your editorial judgment.

[1] In fact, in an example the lawyer displayed for another purpose, there were three uses of the passive voice in the first four sentences. All three uses were appropriate; I’m just pointing out that it’s not reasonable to advise, “Never use passive voice.”

There’s no rule against beginning a sentence with but.

Sure, it’s a wise admonition from middle-school English teachers that novice writers avoid beginning a series of sentences with but.

In high school, many English teachers embrace the beginning but. My son’s 9th-grade English teacher included “beginning with a conjunction” in a list of writing techniques, offering this example, But how could this be? and requiring students to create their own examples.

What? Teaching kids it’s okay to begin a sentence with but? No wonder writing skills are in decline and college students (not to mention law students) don’t write well.

I applaud this high-school teacher, and he’s in line with the general view of numerous writing authorities.

I’ve made this point before: Lite Connectors, Austin Lawyer 13 (Dec. 2008 / Jan. 2009). I won’t rehash the sources I quoted there, but I’ll refer you to Bryan A. Garner, On Beginning Sentences with But, Mich. B.J. 43 (Oct. 2003); The Chicago Manual of Style (“a perfectly proper word to open a sentence”); and the Internet, where a Google search for “beginning with but” turns up many reputable authorities recommending the practice.

As with many writing “rules,” the truth is that beginning with but isn’t about wrong or right; it’s about formality, emphasis, and style. So don’t uncritically apply this nonrule. Think about your writing goals and options and decide how you want to use the language.

Let’s start with formality. Although we should be comfortable beginning with but in e-mail messages, print correspondence, and inter-office memos, some lawyers avoid the practice in formal documents like motions, briefs, and judicial opinions. Yet the technique has been used in formal legal documents for centuries. Here are some examples.

And from the U.S. Constitution:

In fact, the Constitution has seven sentences beginning with but.

If we accept that beginning with but is appropriate for formal legal documents, then it becomes a tool we can use to manage emphasis. Using the example from Arlington v. FCC, note the differing emphases in these three versions:

You can do more than use the technique for emphasis. Once you’re comfortable beginning with but, you can use it to create readable, crisp transitions that quickly orient the reader to a change of direction. For crisp transitions, yet is a great word to begin with, too.

Yes, you can begin with however or in contrast or on the other hand. They’re fine. But now we know that beginning with but is fine for formal legal documents, gives us a tool for managing emphasis, and makes a great connector.

After all, there’s no rule against beginning a sentence with but.