Get the book: Legal Writing Nerd: Be One

The last post introduced a way to think about plain words versus fancy ones: sometimes it’s the difference between words of Saxon origin and words of Romance origin. As a refresher, and to set the stage for this post’s focus, try this quiz. For each Saxon-named animal, give the French (Romance) name for the type of meat: chicken, cow, deer, sheep, pig. (Answers at the end of the column.)

During the 1200s, French became the primary language of the law in England. In the 1400s and after, English began to replace French as the language of the upper classes. (History lesson omitted.) Hence the Saxon names for farm animals and the Romance names for their meat when served—as seen in our quiz.

English also began to replace French as the language of the law. Thus, as explained by David Crystal in The Stories of English, legal scribes often had to decide what words to use when “French and English each provide a copious supply of relevant items.”1 Often they didn’t choose—they used both.

As Crystal puts it, “Old English goods and Old French chattels resulted in Middle English legalese, goods and chattels.”2 Sometimes the pairs were synonyms, sometimes they were subtly different, and sometimes they were paired out of “stylistic habit, perhaps fostered by their undoubted rhythmical appeal in oral performance.”3

Many of these doublets persist today, as we saw in the pairs listed above. We also see triplets:

Old legal language isn’t necessarily bad legal language, so how should legal drafters address these doublets, triplets, and longer strings? My advice here relies on my preference for plain, direct words and on the expertise of Kenneth Adams in his Manual of Style for Contract Drafting.4

First, do enough research to decide whether the doublet, triplet, or string contains words that differ in meaning or whether they’re true synonyms. (Sources to consult: Adams’s Manual of Style, Garner’s Dictionary of Legal Usage, and Black’s Law Dictionary.) If they’re not true synonyms, decide which meanings you intend and keep only the words you need.

If you have true synonyms, do your best to pick one word that conveys your intended meaning and delete the others. For example, in most contracts, sell and convey can be shortened to sell. If you intend separate actions—selling the item and then conveying the item to the buyer—then separate provisions requiring the seller to both sell the item and deliver it would be better.

What about the stock judicial phrase ordered, adjudged, and decreed? Certainly it’s harmless as is, but it would also certainly be harmless to shorten it to ordered.

And this monster is still sometimes used with security interests: grant, assign, convey, mortgage, pledge, hypothecate (what?), and transfer. Adams says it can be shortened to grant.5

To those who say that the extra words are harmless, so there’s no reason to excise redundancies, I can say only this: you’re mostly right. But litigation over the Romance-Saxon phrase indemnify and hold harmless gives pause. Some courts say they’re synonyms, while others say they’re not.6 Ultimately, a knowledge of Saxon-Romance pairs might help you streamline and improve your contracts.

Wayne Schiess’s past Austin Lawyer columns are collected in a book available on Amazon.com: Legal Writing Nerd: Be One.

In reading about writing, I’ve run across the following advice

But I never paid much attention because I didn’t know what it meant. When I finally learned, from Classical English Style by Ward Farnsworth,3 I saw that the advice could apply to legal writing, too.

Modern English contains words of many origins, but two key sources are Anglo-Saxon and Latin; many words of Latin origin are also French and are sometimes referred to as words of “Romance” origin. Yes, I’m skipping the history lesson, but some common examples can help make the point. Here are four pairs in which the first is of Anglo-Saxon origin and the second is of Latin/French/Romance origin:

No, they’re not perfect synonyms, but we can immediately make some generalizations: Saxon words tend to be shorter—often single syllable, and harder in sound; they also tend to be concrete rather than abstract, and less formal, too. One way to put it is that Saxon words are plain, and Romance words are fancy, as in these Saxon/Romance noun pairs:

Try it. Here are five Saxon verbs—try to think of the Romance synonyms:

What can we do with this knowledge? The recommendation is not to replace every Romance word with a Saxon word—the best writing advice is rarely always or never. Instead, generally default to Saxon words but use your editorial judgment, considering audience, tone, legal terms, and subtleties of meaning. Here are some before-and-after examples with comments.

You might reasonably ask why it helps to know that the plain word is Saxon and the fancy word is Romance. Can’t we just use plainer, simpler words when possible? Yes, you can. But I hope this will help raise your writing IQ.

Plus, there’s more to know about Saxon and Romance words in legal writing, and I’ll continue the discussion in the next post. For now, put Saxon/Romance (or just fancy/plain) on your writing radar. Start to notice when you use a fancy Romance word when you could use a plain Saxon one.

The word witnesseth, a legal term used in deeds, contracts, and other formal documents, passed away Monday after a decades-long decline and what some say were well-deserved attacks. Those close to the word said it died in a legal form pulled up on a smart phone in Little Rock, Arkansas. It was 587 years old.

One of the most enduring Elizabethan archaisms, witnesseth’s late decline represented a steep fall from its heyday. It rode high on the fear of “changing the form” for more than two centuries. It prospered despite challenges, such as one raised in 1744, when a legal scribe first asked a lawyer, “what is this word, and why are there spaces between the letters?”

The deceased in a recent photo.

Witnesseth maintained its entrenched position in legal documents, although it was more and more often relegated to land deeds, until at least 1957, when a busy real-estate lawyer in Waukeegan, Illinois, inadvertently left it out of a draft deed, which a secretary dutifully typed up. Yet the real-estate transaction closed without incident, and witnesseth began its slow decent.

Rumors persist among some hostile to witnesseth that the reports of its death are premature and that it is lying low in old formbooks and county real-estate filings, waiting to be recognized and used again.

I’m pleased to recommend my book, which promotes plain writing in documents intended for nonlawyers. 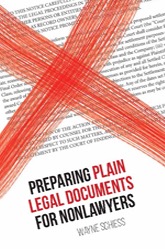 Sold by the ABA. Makes a great gift. Get it here.

Compound prepositions are prepositions on steroids. Instead of being concise and simple, they’re puffed up, like for the purpose of, by means of, and with reference to.

In Plain English for Lawyers, Richard Wydick says they “suck the vital juices from your writing.” He offers some of his least favorites: by virtue of, in relation to, and with a view toward. And in The Grammatical Lawyer, Morton Freeman calls them “drawn-out prepositional phrases” (an apt name). He particularly dislikes during the course of, in terms of, and on the part of.

They’re almost always unnecessary, so deflate them. For example, the compound prepositions in the next sentence can be easily shortened to one word:

Put them on your editing checklist.