After he finished his extensive inspection of the entire jurisdiction of New Spain in 1771, José de Gálvez compiled all of his observations, collected data, and suggestions for improvement into a single document. That report eventually made its way up through the highest ranks of the Spanish bureaucracy to reach the king’s eyes. The information it contained contributed to the Spanish monarchs’ major reconceptualization of colonial management over the next several decades. The document thus encapsulates an important historical moment.

In the mid-eighteenth century, Carlos III of Spain, a monarch renowned for his strength and leadership, ruled a truly global empire. His authority extended into the social, political, economic, and military administration of both large cities and small villages throughout the Americas. Most of this ruling, however, took place by proxy. Residing comfortably amidst the the fineries of his royal palace in Madrid, the Spanish monarch was a figure of impressive authority, but all was not well in his empire.

Managing such a vast territory that stretched across much of the North American West and extended through South America, and into the Phillipine Islands, was no simple task. In the first place, there were practical difficulties of administration, which centered on the complexity of communication between such distant and geographically diverse regions. Another obstacle created by this distance was the lack of monarchical supervision over local happenings. Corruption and inefficiency were therefore some of the monarchy’s most serious concerns. 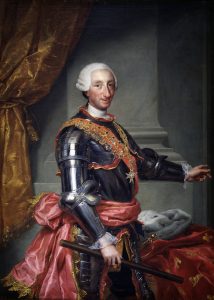 Within this context, the royal court decided to sent José de Gálvez to check up on its prize possession in the Americas, the Viceroyalty of New Spain. A Spanish lawyer and former ministry secretary, Gálvez had the important task of combing through the entire jurisdiction to identity ways to increase law enforcement and economic efficiency. He set off in 1765.

Gálvez traveled through New Spain for about six years, inspecting the local bureaucracy with a fine-tooth comb. After this long process of information collecting, he compiled his observations and recommendations into a comprehensive report. This process is apparent in the way that Gálvez structured his own report. It opens with a succinct introduction to his lengthy description of the state of affairs in New Spain. Written only after Gálvez had finished his inspection and had time to reflect on his experience, the summary nature of this document is clear. As he notes, “I owe you majesties the presentation, with the possible distinction and clarity, of what I have accomplished, the current state of things, and the method I suggest for further improvement.” Given the difficulties of transcontinental communication, such a well-organized report would have significantly streamlined the presentation of information to the far-away king.

The Gálvez report has four main sections, each subdivided into dozens of topic-based descriptions. Section one discusses the ministries of justice, tax collection, land division, and the new local political system of intendancies. Each of these areas was of major importance for the Spanish monarchy because of the underlying goal of improving imperial control and increasing royal revenue. Section two describes ironworks, while section three describes cities, towns, and villages. The final section explains the expulsion of the Jesuits from the territory by royal order. Gálvez maintains an authoritative stance throughout the document, citing his observations and his desire to foster the public good through the reforms that he suggests.

There is a misleading neatness to what he captures on these long pages of neatly written description. Behind every three-page subsection on some small aspect of the economic or political world, there were dozens of letters back and forth between Gálvez and local officials reporting observations, proposing plans, asking for plan approvals and local cooperation, and checking progress. A royal inspector had royally-granted authority to carry out his orders, but he did not have a free reign. His interactions with local bureaucrats and other authorities significantly influenced his degree of success. As a result, his statements about the relative benefits of making his suggested changes reflect the long and complicated processes required for any bureaucratic activity in this imperial world.

This report goes on for 300 pages, and as soon as it was finished in 1771, Gálvez sent it up through the bureaucracy as an official notice to the king. Examining this document provides a window into an important era in Spanish imperial history. This extensive inspection paved the way for what became known as the Bourbon Reforms, a series of extensive economic and political restructuring efforts designed to increase the efficiency of the Spanish American territories.

For decades afterward, the Gálvez inspection served as a model for reforming the expression of imperial authority on the ground, enforced by Gálvez’s continued influence in the bureaucracy as a high court judge. The immense pressure that these reforms placed on the shoulders of already hard-pressed laborers erupted in uprisings on multiple occasions in different parts of the empire. When independence movements developed in the early nineteenth century, the image of this example of strict monarchical control was still fresh in the collective memory. Understanding the processes of inspection carried out in the Gálvez visita sheds light on the ways that the persistent local involvement of royal authority contributed to these major shifts.