This document is an order from Gálvez to the priests of the entire viceroy of New Spain. Gálvez had only begun his inspection a few years before, but his economic motives and goals for efficiency had already become clear. As he outlines here, Gálvez demands that all the priests perform their proper duties and submit to this regulation about purchasable spiritual grants, including indulgences. The bull of the Holy Cruzade that he refers to was an important historic grant for those involved in what the Spanish characterized as spiritual warfare against the non-belieing infidels. References to the viceroy’s and the king’s approval of his mandates serve to legitimize Gálvez’s authority in this project. 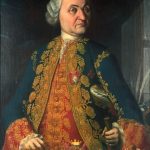