This report comes from Gálvez’s inspection of the tobacco industry in New Spain, which was an important concern for the monarchy. Tobacco was a valuable product with a global market, so making sure that it remained profitable was essential. Gálvez spent years looking into the functioning of economic industries like this one, and he preserved his observations in lengthy reports. In this case, after having spent that time becoming familiar with tobacco prosecution, he wrote a summary report on the specific issue of importing rolling paper, which had caused some disagreement among the local leadership. Given the multitude of bureaucrats involved in the political and economic functioning of the Kingdom of New Spain within the larger Spanish Empire, brief overviews of these kinds of issues significantly facilitated the spread of information. As Gálvez remarks towards the end of this document, “he would not want to bother your majesty” with the creation of an unnecessarily long report. Within about 10 pages, he provides a concise and valuable update for the viceroy. 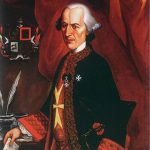