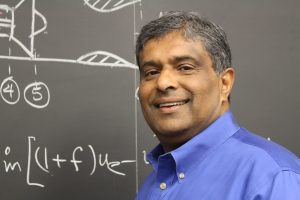 Prof. Varghese holds the Ernest H. Cockrell Centennial Chair in Engineering and served as the Department Chair of Aerospace Engineering & Engineering Mechanics from 2009 to 2012.  He has an international reputation in the area of combustion diagnostics and non-equilibrium flows. He was awarded a Fulbright Grant in Fall 1993 to apply laser diagnostics to hypersonic wind tunnels in France.  In summer 1998 he was awarded the Boeing-A.D. Welliver Faculty Fellowship by the Boeing Company, and in Fall 1999 he was appointed Director of the Center for Aeromechanics Research. He was a member of the National Technical Committee on Aerodynamic Measurement Technology of the American Institute of Aeronautics and Astronautics from 1994-2010. He received the Department Teaching Award in Spring 2001, the Lockheed Martin Aeronautics Company Award for Excellence in Engineering … END_OF_DOCUMENT_TOKEN_TO_BE_REPLACED