A 2016 Symposium on the Gṛhastha: New Approaches to the Householder in Ancient India at UT-Austin resulted in the publication of an edited volume through Oxford University Press. 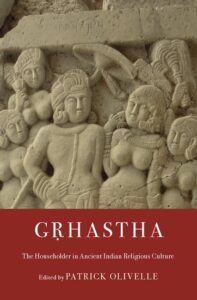 For scholars of ancient Indian religions, the wandering mendicants who left home and family for a celibate life and the search for liberation represent an enigma. The Vedic religion, centered on the married household, had no place for such a figure. Much has been written about the Indian ascetic but hardly any scholarly attention has been paid to the married householder with wife and children, generally referred to in Sanskrit as gṛhastha: “the stay-at-home.” The institution of the householder is viewed implicitly as posing little historical problems with regard to its origin or meaning.

This volume problematizes the figure of the householder within ancient Indian culture and religion. It shows that the term gṛhastha is a neologism and is understandable only in its opposition to the ascetic who goes away from home (pravrajita). Through a thorough and comprehensive analysis of a wide range of inscriptions and texts, ranging from the Vedas, Dharmaśāstras, Epics, and belle lettres to Buddhist and Jain texts and texts on governance and erotics, this volume analyses the meanings, functions, and roles of the householder from the earliest times until about the fifth century CE. The central finding of these studies is that the householder bearing the name gṛhastha is not simply a married man with a family but someone dedicated to the same or similar goals as an ascetic while remaining at home and performing the economic and ritual duties incumbent on him. The gṛhastha is thus not a generic householder, for whom there are many other Sanskrit terms, but a religiously charged concept that is intended as a full-fledged and even superior alternative to the concept of a religious renouncer.