If you are considering the String Project, or if you or your child will be starting lessons on a string instrument, you will find it helpful to be somewhat familiar with your various options.

For children, simply physically managing a full-sized instrument can be difficult and frustrating. Fortunately, all of the string instruments are available in various small sizes that are proportional to child-sized bodies. The String Project has a limited library of sized and full-sized instruments available for rental to our students, and many music stores in the area also rent sized instruments. Choosing an appropriately sized instrument is very important, since practicing on an instrument that is too large can lead the student to cope by developing physical habits and postures that are, in the end, both detrimental and very hard to change.

The violin is the highest pitched of the string instruments. Violins and violas look very much alike, and both instruments sit on your shoulder while you play them.

Like all string instruments, violins are very versatile, but they are maybe most commonly seen in classical music, fiddling, and mariachi music.

More kids choose to play the violin than any other instrument in String Project. It can be nice to have many friends who also play your instrument, but sometimes it can be hard to be in such a big crowd.

The viola looks a lot like the violin, and like the violin, it sits on your shoulder. However, a viola has a deeper, lower sound. This instrument has a long history and a beautiful sound. Many composers have chosen to play viola when playing their own pieces. The American Viola Society and many groups like it sponsor competitions, publish magazines, and commission new compositions all centered on violas.

Because not many people know about the viola, violists are constantly in demand, not only in the String Project, but also in other educational groups and in the professional world. Just listen to the sample and hear how great a viola sounds!

The viola most often plays the harmony part. While not always the part we would think to sing, harmonies create depth and are important in the overall sound of an orchestra.

Left: A full-sized cello.
Right: A student with a cello her size.

The cello is also a popular instrument with our students in the String Project. Many students prefer the cello to the violin because of its deeper, lower sound. Cellists play the lowest, root parts in string quartets, providing an anchor in a chamber music group. In string orchestras, only the bass plays lower parts than the cello.

The cello is so big that players place it between their legs when playing; an end pin, or metal rod, keeps it at the right height. Unlike a violin or viola, a cellist places the bow across the strings level with the floor. Some famous cellists include Yo Yo Ma and Pablo Casals.

The cello plays all sorts of parts in the orchestra! Although it may start out as a bass line (or foundational) part, it also plays harmonies and melodies all the time.

The bass is the lowest of the string instruments, and the root of the orchestra. A full-sized bass is so large that it is virtually non-existent; most play a three-quarters sized instrument instead, including many professional symphony members (sometimes a 7/8 size). The bass is unique among the orchestral strings in that it is a member of the viol, not violin, family of instruments. A bass is also sometimes called a string bass, upright bass, double bass, or contrabass.

While sometimes the most understated, the bass is perhaps the most versatile of all classical string instruments. Bass players are not only in demand in the world of classical music, but are also at the root of many styles of music, including jazz, salsa and Latin music, country, bluegrass, folk, soul, R&B, rock, and pop music among others.

Bassists usually play the bass line within an orchestra, which creates the foundation for the entire orchestra. 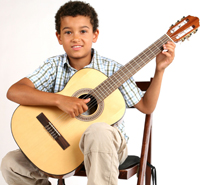 Left: A classical Guitar.
Right: A student with his guitar.

Most Classical Guitars have six strings. One of the neatest things about classical guitar, and something that sets it apart form other string instruments, is that you can play both melody and accompaniment at the same time! The instrument is plucked with the fingers of the right hand – professionals and advanced students even use their fingernails.

Music for the classical guitar ranges from hundreds of years ago all the way to the the present day and even though many people think of the guitar as being a Spanish instrument, music for the guitar comes from all over the world. Guitarists play solo (all by themselves) but also with other instruments and voices and, sometimes, even with symphony orchestras.

Almost everyone who has seen a string instrument has seen a bow, but not as many people have heard of them. The bow is the stick players rub on the instrument’s strings to produce sound. Some string instruments, like guitars and harps, make sound when the player plucks strings without a bow. The orchestral string instruments can do this too, but they were designed to be played with a bow and make use of them most of the time. However, the bass employs the pizzicato style, or plucking, more than the other strings.

A bow is a carefully crafted piece of wood with the tail hair of a horse stretched between the ends. Some bows designed for beginning students use synthetic materials instead. Because the bow is what makes an orchestral string instrument produce sound, learning to use your bow is at least as important as learning what to do with the instrument itself.