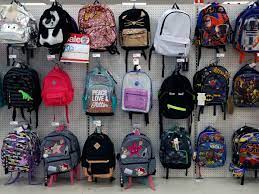 After more than a year of almost entirely virtual school, most schools and universities are returning to in-person education this fall. This means that students will be spending more time walking to and from classes, studying on campus, and exploring the city, all while sporting any student’s quintessential accessory: the backpack.

While backpacks are practical and comfortable, the books, laptops, water, and other things inside can also be extremely heavy. For decades, concerns have been periodically raised regarding daily use of a heavy backpack. A heavy or awkward backpack might be uncomfortable, but the idea that it causes harm is likely an overstatement.

There are also things you can do to improve comfort with a standard backpack. Backpacks with two, wide, cushioned straps allow weight to be distributed evenly, which may be more comfortable than a messenger bag or a backpack slung over one shoulder. A waist strap can also help distribute weight. Tighten all straps so the backpack hangs in the center of the back.

In addition, packing one’s backpack with the heaviest items closest to the back and spreading items throughout all the pockets might also be more comfortable. Consider buying electronic copies of books or keeping duplicates of supplies at home so you don’t have to carry around as much weight. If you struggle to put on a backpack or lean forward while wearing one, you might want to try using a rolling bag.

Backpacks are utilitarian, timeless parts of the student experience, and can and should be used in a way that makes you feel most comfortable and prepared for your day. While they may, at times, be uncomfortable, Think Twice thinks these references may overstate the potential for harm from backpacks. In our opinion, the imperatives (e.g. “should”) and statements that there is a “wrong” way to wear a backpack overstate what we see as options for getting around comfortably with school books. There is no evidence for harm associated with backpacks. 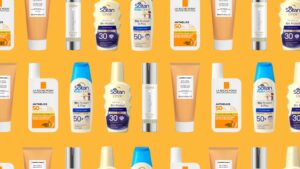 With beach season at its peak, wearing sunscreen can protect your skin from harm related to UV radiation. Sunscreens come in various strengths from Sun Protection Factor (SPF) 5 to SPFs over 100. But do sunscreens with higher SPFs actually provide more protection from the sun?

There are two types of UV radiation produced by the sun: UVA and UVB. UVB causes sunburns and skin cancer while its counterpart UVA infiltrates into deeper skin and induces changes in the skin associated with aging such as increased wrinkles, age spots, and pigmentation. Broad-spectrum blocking sunscreen provides protection against both forms of UV radiation but the Sun Protection Factor (SPF) of a sunscreen refers to how well a sunscreen can protect your skin from UVB. SPF can be thought of as a factor of how much longer it will take your skin to burn than without sunscreen. For example, applying SPF-15 sunscreen means that your skin will take 15 times longer to burn than if you were not wearing sunscreen.

However, as SPF increases, the benefit decreases, ultimately plateauing at SPFs higher than 50. SPF-15 sunscreen stops approximately 93% of radiation from getting into your skin, SPF-30 stops 97%, and SPF-50 can protect you from 98%. No sunscreen can stop 100% of UV radiation so there isn’t a big difference between using SPF-50 and SPF-100 sunscreen.

In fact, there can even be diminishing returns from using sunscreen with high SPFs. Higher SPF products usually contain higher concentrations of chemicals that may be associated with potential side effects, such as hormonal imbalance, since there is some level of skin penetration. In fact, the FDA has stated that high SPF sunscreens are misleading, providing a false sense of security without data showing any greater advantage of high SPFs.

Medical professionals recommend sticking to sunscreen from SPF-15 to SPF-50 while having fun at the beach. Regardless of the SPF you choose, make sure to reapply sunscreen every two hours to stay safe and healthy in the Sun!

Believe it or not, summer is just around the corner. For many families, the end of the school year means that kids will be spending more time playing, often with toys made of various plastics. Plastics are safely used in countless household items, but recently, many people have begun to voice health concerns regarding their use. Let’s look at what the evidence says.

One material that is a focus of concern is bisphenol A, commonly known as BPA. Concerns about BPA arose when a 1930’s researcher searching for an artificial estrogen found that BPA shared many of the properties of estrogen. In the late 1990’s, BPA was discovered to be leaching out of plastics when researchers in a lab at Stanford noticed cell cultures in plastic containers reacting as if they had been treated with estrogen. Some have suggested that BPA in low doses may be linked to a number of health effects, such as changes in thyroid function and fertility, birth defects, and others. However, the amount and quality of evidence supporting these theories is limited.

Phthalates are another class of chemicals that have recently been considered. Since the 1920’s, phthalates have been added to plastics in order to increase flexibility, durability, and other desirable qualities. Some evidence suggests that these materials can come loose from the plastic that they were added to, leach into the surrounding area, and then be introduced into the body through diet. Other studies seem to show that high levels of phthalate exposure in utero could be associated with birth defects such as shorter gestation (pregnancy) period, motor deficits in females, disrupted male reproductive development, and other deficits. Regulatory agencies, such as the US Environmental Protection Agency (EPA) and the US Food and Drug Administration (FDA), now require warnings on products that contain phthalates. Furthermore, regulations and bans on the various uses of phthalates have been passed across North America and Europe.

Lastly, the summer season often comes with hours spent playing in the water, often with squeezable plastic toys such as a rubber duck (which may also be used in the bath). These toys, often stored in dark, damp areas such as a bathroom, are prime environments for the growth of microbes. This microbial growth can develop into what is known as a biofilm– an aggregation of microbes held together by a slimy, secreted matrix of polymers. When the child squeezes the toy to eject the water, the bacteria are expelled as well. Exposure to pathogens early in life can help strengthen a child’s immune system. However, pathogens (including some of those shown to grow in rubber duck biofilms) can potentially also infect children, especially through mucus membranes such as the eyes, ears, nose, or mouth. This infection can lead to diarrhea, meningitis, urinary tract infections, and other symptoms.

These risks are small and are often mediated by other factors, meaning that overall, these toys should not be considered dangerous for use. For example, older toys tend to be higher risk for dangerous substances. In order to mitigate the risks of overexposure to these chemicals, some researchers have begun developing and advocating for a more clear labeling system and a standardization of materials used in children’s toys. In the meantime, however, cleaning toys regularly can be a great precaution to take.