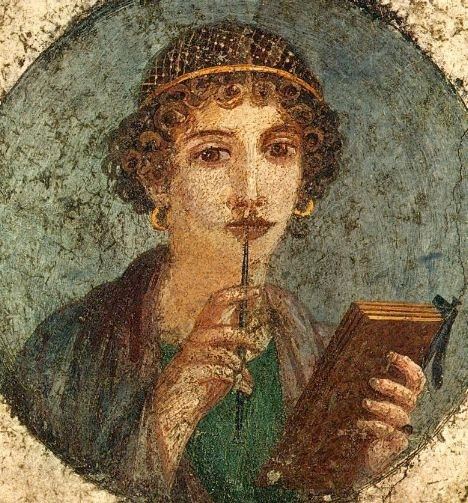 Be generous, my eyes, and shed your tears

Cry for your brother and forget not what is due to his merits.

Cry for your brave brother, for he was never faint of heart.

Cry for your brother, for he left behind orphans and a widow.

Cry for your brother, for he honoured every guest and neighbour,

how a new moon never fails to shine.

Tamāḍur bint ʿAmr ibn al-Ḥārith ibn al-Sharīd, of the tribe Banū Sulaym, more commonly known by her epithet al-Khansāʾ (literally “the snub-nosed,” an Arabic epithet for an antelope as metaphor for beauty), was a seventh-century Arab female poet from Najd (present-day Riyadh, Saudi Arabia). One of the most influential and powerful poets of pre-Islamic Arabia, al-Khansāʾ is best known for her expressive rithāʾ (elegies), which expose the brutalities of war and tribal blood feuds. During her lifetime, al-Khansāʾ witnessed the death of two brothers and four of her six sons in war, which was commonplace due to the scarcity of resources in the arid desert of Arabia. In 622, her brother Muʿāwiya was slain in one of the many battles that took place between al-Khansāʾ’s tribe, Banū Sulaym, and the allied tribes of Banū Murra and Banū Asad. Five years later, her half-brother Ṣakhr died of wounds sustained in battle with the same two tribes. After the advent of Islam, four of her sons died in 637 in the Battle of Qādisiyyah against the Persians. Yet, it was the death of Ṣakhr that struck her the most, predominantly featuring in her most heartfelt elegies.

Salma Harland is an Egyptian-born, England-based literary translator who works between Arabic and English. Her literary translations have appeared in the National Centre for Writing’s Emerging Literary Translators Anthology (2022) and in literary magazines and journals such as Ancient Exchanges, ArabLit Quarterly, Modern Poetry in Translation, Medievalists, and Eurolitkrant.