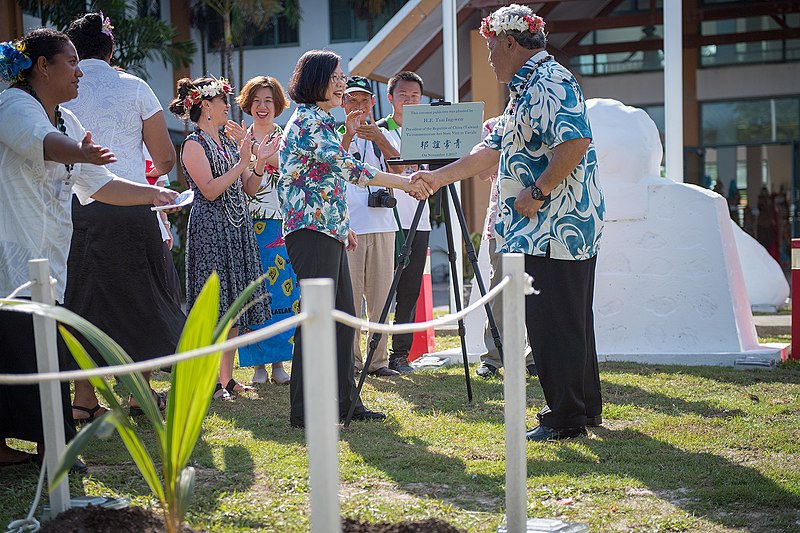 As a brief summary, Taiwan only has 15 allies globally that recognize it as an official country. Four of them are Oceanian Pacific Island Countries (PICs): the Marshall Islands, Nauru, Palau, and Tuvalu. The Solomon Islands and Kiribati were once part of this group, but shifted their policy in September 2019 to endorse China instead. While it seems that the remaining PICs that do support Taiwan may not change in the near future, their relations with Taiwan cannot be taken for granted. The Solomon Islands economy, before the switch, featured many goods and services provided by Taiwan. And that decision to switch also influenced Kiribati. Taiwan is in a precarious position when it comes to global and PIC recognition of its autonomous status.

So, what is China actually offering to these countries? My colleague Claire Huitt explained the situation in the Solomons and Kiribati in her own blog post on the subject. She found that some reporting speculated that Beijing promised the Solomons some 500M USD in financial aid and offered Kiribati planes, ferries, and “unprecedented development opportunities.” Both Kiribati and the Solomon Islands have signed onto China’s Belt and Road Initiative, and in late September. Chinese funding is going toward “much-desired transport and utility infrastructure.” Chinese firms are building ports, roads, wharfs, water networks, etc. In contrast, aid coming from the US and Australia has historically gone toward “bolstering governance, health and education services.”

Other analyses suggest that these opportunities are more than just economic, they are also part of the existential climate change threats PICs face. The US is the only country to withdraw from the 2015 Paris Agreement, and China has not only vowed to stay in, but also be a leader in addressing climate change. The Solomon Islands cited the lack of leadership from the US government regarding climate change; the Solomon Islands’ prime minister’s chief of staff even told NPR that climate – in addition to economic considerations – prompted the switch. Kiribati and the Solomon Islands hope that economic aid from China will drive economic development and their government capacity to mitigate and adapt to global warming.

What matters more for PICs – economic, or climate concerns? For most countries, economics usually runs supreme for most trade and foreign policy decisions. But when economic considerations and climate change issues are increasingly interlinked, as seen in PICs climate concerns, climate change issues become an outsized leverage point for a third-party – in this case China – to use to further its own national interests and ambitions. China not only has the state capacity to out-compete Taiwan by sheer volume alone on this front, but is already doing so.

US COFAs may actually challenge Chinese influence in the region. COFA usually also come with economic assistance, and so these may reduce how attractive China’s offers may appear. Simply put, US COFAs with the Marshall Islands and Palau offer a defense for Taiwan in that they have assistance programs in place that reduce the likelihood of said countries needing to switch their recognition to Beijing in order to gain economic assistance. But these COFAs are set to expire in the next few years. If the US decides to renew them, climate security issues may feature more prominently in the negotiations, and it will be an opportunity that China may seek to exploit and undermine to further its own economic and diplomatic interests.

This has important implications for China. If the US decides – actively or passively – that it is not committed enough to Taiwanese sovereignty to the extent that it is willing to make greater climate assurances, China will have little difficulty isolating Taiwan. Likewise, if a concrete policy coalition between Palau, Nauru, and Tuvalu resisting Chinese bilateral efforts to sway their diplomatic recognition of Taiwan fails to materialize, they do not have the independent clout nor the luxury of rejecting aid that can be used to mitigate worsening climate security issues.

The US has its own resources and reasons  to challenge an expansionist China, but these interests and policy mechanisms that enable the US to pursue them are converging on the issue of Taiwan’s autonomy and PIC climate change challenges – whether the US likes it or not. The battle for Taiwan’s autonomy will significantly impact the foreign aid programs in Oceania, filtering what assistance China and the US are willing to give, and to whom.

While climate change impacts the security of each state in Oceania, this contest over Taiwanese legitimacy may influence the distribution of resources, and will be a good indicator of where China diverts most of its efforts in the region. As important as climate change and human security should be for countries like Australia, the US, China, and the broader international community, aid will likely be given more on the basis of other geopolitical ambitions. As it currently stands, climate security and economic development have become the essential geopolitical means through which states can exert influence, rather than serve as ends by themselves.

Jonah Bhide is a second year global policy studies masters candidate at the LBJ School where he studies the intersection of US national security and foreign policy. He interned with the US Military Delegation to NATO HQ in Brussels, Belgium in the summer of 2019. Jonah graduated from the US Air Force Academy in May 2018 with a BS in Political Science, and will attend pilot training upon completing his master's program.