The passing of Nelson Mandela reopens the question of Swiss collaboration with South Africa’s Apartheid regime. Switzerland continued to have both diplomatic and trade relations with South Africa even at a time when the rest of the world shunned the regime. It allowed commodities traders, like Mark Rich, to use Switzerland as a base to circumvent international sanctions against South Africa. Switzerland was not a member of the United Nations then and was not bound by its sanctions. The policy of absolute neutrality served as justification for non-interference and free trade with the result that Swiss corporations were allowed to do business with the Apartheid regime and thus profit from the international sanctions against South Africa.

Christoph Blocher (b. 1940) is one of the most prominent, influential and divisive politicians in recent Swiss history. He was a Nationalrat (national councilor, member of parliament) from 1980 to 2003 and has been serving as Nationalrat again since 2011. He was a Bundesrat (federal councilor) and minister of justice between 2003 and 2007. He represents the populist-right Schweizerische Volkspartei (SVP, Swiss People’s Party) which has spearheaded all anti-immigration and anti-EU measures of the past quarter century and which currently is the strongest party in Switzerland.

Blocher was a co-founder of the  Arbeitsgemeinschaft Südliches Afrika (Southern Africa Working Group) in Switzerland–a Swiss lobby group that supported the Apartheid regime all the way to its demise.  The work of this influential but secretive group still is largely unexplored. In spite of the 2005 report by the Swiss historian Georg Kreis on Swiss relations with South Africa between 1948 and 1994, there is little public awareness of the larger role Switzerland played in support of the Apartheid regime. 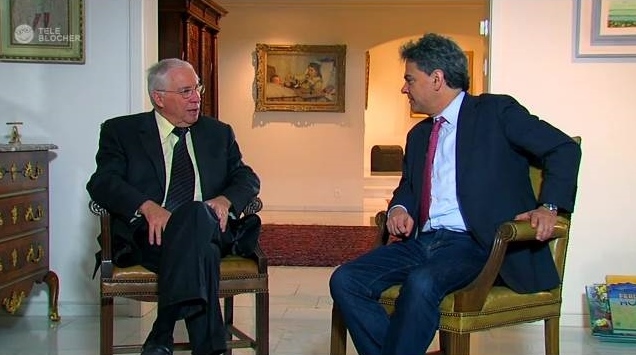 For several years, Blocher has run his own webcast called Teleblocher–a weekly program where he chats with the Swiss journalist Matthias Ackeret about the issues of the week. The 25-minute program recorded on December 6, 2013, includes a segment dedicated to the passing of Nelson Mandela which lasted a total of six minutes and 42 seconds (also posted on Youtube). The conversation was in Swiss German–I transcribed and translated the entire Mandela segment, and I am posting it below. The interview has a certain oral and stream-of-consciousness quality to it, and I decided to render that in my translation even though it is is not always clear what Blocher meant to say. The transcript also does not render the tone of the conversation–for instance the indignation with which he tells us how the Swiss federal government refused to receive the South African president F. W. De Klerk in the late 1980s. The Mandela segment starts at minute 7:12 and ends at 13:54.

Rather than commenting on this interview, I want to make it available to a wider global audience. What this interview shows is a clearly Euro-centric, unrepentant racist apology in support of the Apartheid regime–and of the Swiss collaboration with it. Blocher throughout the interview idealizes the accomplishments of the Apartheid regime while showing contempt for Black liberation. But I think that the text can stand for itself. Read on.

Ackeret [7:12]: Well, our second topic is a bit more serious. This morning, an announcement which went around the world, Nelson Mandela died. What kind of a relationship did you have?

Blocher [7:21]: I did not have a direct relationship, but I followed this issue of course. Simply put, Nelson Mandela was in South Africa which had a very brutal and strict racial division between White and Black—he always fought for Black people to have the same rights. And he was banned and put into prison—that was an island just off the coast where he was put. And as the Whites were–whoever was against that, it was a question of whether the government would be toppled—they intervened quite brutally. And South Africa was part of Southern Africa.

Ackeret [8:11]: Well, you were part of this famous committee.

Blocher [8:13]: The Arbeitsgemeinschaft Südliches Afrika (Southern Africa Working Group); it was not just concerned with South Africa. And that was during the time of the Cold War. The Soviet Union wanted to do everything to gain control over Southern Africa. Because, this was the Cape of Good Hope, it was a very important route around Africa. And whoever strategically had control over this had an important part of global power in their hands. And thanks to the most important state in Southern Africa, South Africa, where the Whites made sure that it would not be Communist-controlled, they did not gain control over it. And the Southern Africa Working Group in which mostly higher officers [of the Swiss Army] were participating was concerned with this issue.

Ackeret [9:06]: But which supported Apartheid—that was the allegation at the time.

Blocher [9:08]: No, no, that is what they said, because we said that South Africa should resolve this problem on their own. Of course, it is clear: Russia wanted the Blacks to gain control because with them they could have turned things. So they held back in such a strategic situation. And the Whites always said that when they get this into their hands we would not come anymore. But one always has to know: Africa turned this regime on its own, and it was the Whites to be sure. And I was part of these discussions. And De Klerk who afterwards turned things.

Blocher [9:55]: He [De Klerk] came to Switzerland shortly before that. He was not given a reception, in Switzerland, by the Bundesrat [Federal Council]. They let him stand in front of the Bundeshaus [federal building] just so they would not get a bad reputation with the United Nations. So I received him with two or three other members of parliament in the Bellevue [hotel]. And then, as a White, he turned things around and received the Nobel Prize afterwards. And since then, race discrimination has disappeared. Africa is a wonderful country, this has to be pointed out, in terms of landscape, and the Whites kept very good order. But they did not grant equal rights. They did everything to integrate the Blacks. Hundreds of thousands of them, every year, came from the North, all Blacks, because they had it much better in South Africa than back home. But they did not have political rights. They also did strange things: they labeled benches, only for whites, only for blacks. And the Blacks also did not want to be where the Whites were. For us, this is a alien way of thinking.

Blocher [11:10]: The committee wanted to ensure that South Africa would not fall into the hands of Communism. Because we knew if that was going to happen the Cold War would turn in favor of the left, of the Soviets. One would not get it back once they would control that tip [of Africa]. The Americans knew that too. That is why the Americans always did both things: Apartheid, nothing at all, but simultaneously collaborated with the South Africans. And I believe that this was the merit of those groups who said, let the South Africans solve the issues on their own, we do not have to give them advice, and they did solve it themselves. South Africa is difficult now. One has to be very careful when going to South Africa, because they have a high crime rate which did not ever exist before. It is difficult to go out into the streets, and of course they are economically doing more poorly than before.  But as before,  South Africa is the state that is the strongest in Southern Africa, and all the other states profit from that as well.  And now Mandela, the representative, they had released him, and since then he has been a hero in South Africa.

Blocher [12:37]: Well, I mean, he contributed a lot to the end of racial discrimination—this is alien to us. And rightly so, we say that he fought during his entire life and went to prison—that is always a sign that one is serious about it. But perhaps he has been overrated (“überschätzt”) in many places. This is how it goes: if somebody did something well at some point, everything else he does is considered to be good. But this is all over now. Those who in the early years saw Mandela’s house—which for us almost is a palazzo—and Bishop Tutu, that was the other one…

Blocher [13:31]: Yes, look at it. I wanted to see where they lived. Well, I said, of course this is hierarchical. But in these states this has to be that way, that people of this kind and that kind live that way. And of course those in the regime made sure that they did not have to live in poverty. 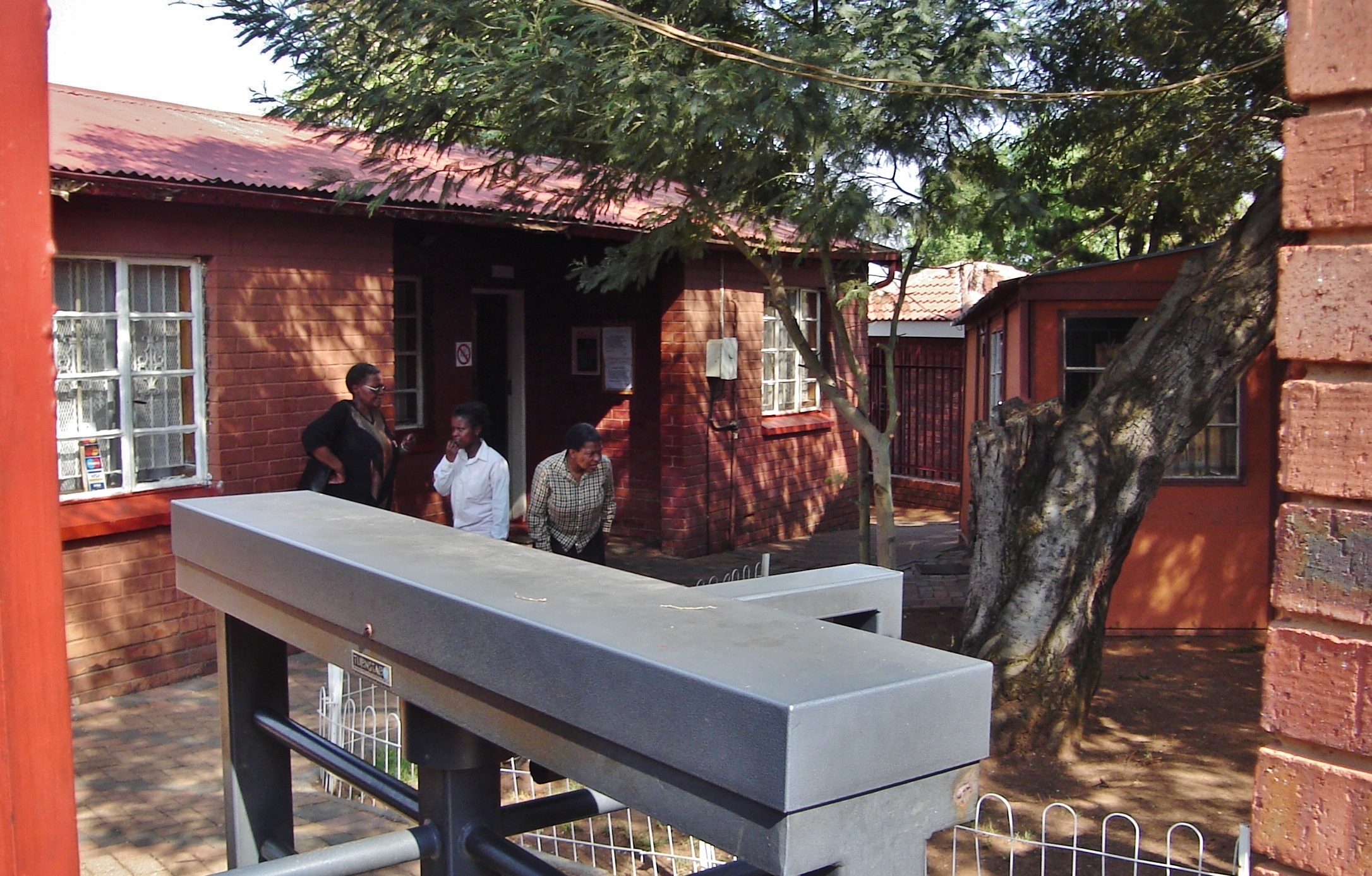 Nelson Mandela’s home in Soweto before his 1964 imprisonment. Yes, I went to see it too–not exactly a palazzo. (2007)

Rhäzüns castle, part-time residence of Christoph Blocher. Why criticize Mandela for living in a simple bungalow?