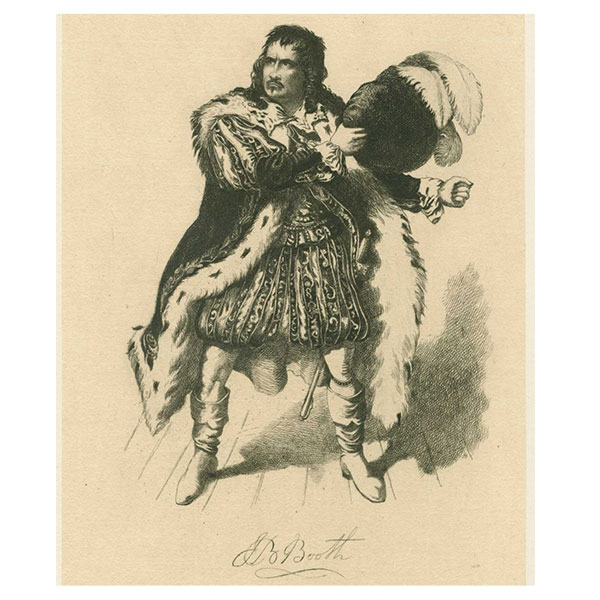 “Ready trumpet. Boy ready with armor. Take time. More piano. Long flourish continued till discovery, next Sc. – and do not W Till Mr Booth is on stage.”

I’m trying to decipher this sentence. I’m trying to translate these notes, some written by a prompter (basically our modern day stage manager) and some by the star of the show (our modern day actor/director), into usable instructions. I’m trying to resuscitate playing practices that have been dead for over 100 years, using an 1861 promptbook of Shakespeare’s Richard III.  (Really, it’s Restoration playwright Colley Cibbers “fix” of Shakespeare’s Richard III in 1699, but that’s another story.) The promptbook is the play script with detailed notes handwritten inside to instruct actors and theatre staff before the star arrives to play his part.

For The Hidden Room, a company that specializes in scholar/practitioner collaborations, often recreating historically significant theatre, these handwritten notes are DNA hidden in the book’s rich amber. But the actor/director who wrote most of them, than man who is assisting me from the beyond is John Wilkes Booth.

In 1865, John Wilkes Booth will assassinate Abraham Lincoln. Yet here in 1861/2018 he kindly assists me, blissfully unaware that he will become one of the most detested villains in American history. “Shouts. Clashing of swords all through – distant at times.” That’s good. That’s a good note. The sound effects of swords clanging, sometimes more quietly as though far away helps build an encompassing battle for the audience to imagine.

“All the characters discovered & fight above. 2 & 3 groups. Long flourish kept up til Richard fights through Soldiers and meets Richmond who enters RIE. All fight at flourish stop.” Now I have a better idea of the timing and accents of the battle, and its extravagance. I know this is a massive, violent spectacle, and I see the drama of the lead-up to Richard and Richmond’s epic fight, as Richard forces his way through a curtain of struggling soldiers. These are remarkably helpful notes. But I remember again that they come from him, and I struggle to focus.

We almost certainly would not have this promptbook had its owner not been so morbidly interesting. It is well-traveled, and such books often didn’t survive past their usefulness in production. It could have been chucked at any point. Legend has it most of John’s belongings were burned by his brother Edwin, an actor whose reputation for greatness lives on despite his brother’s infamy.

But still this promptbook remains, and was recently pulled from its careful storage at the Harry Ransom Center by Eric Colleary, Cline Curator of Theatre and Performing Arts. Colleary recognized its immediate practical use, especially to a theatre company like the Hidden Room. Regardless of the man it belonged to, despite him even, it is a treasure to me. It’s a time machine back to forgotten practices in drama, and there is so much to learn. The big red “W” underlined, what is that? Into the vaults Colleary and I go to find books from the period on acting and “amateur theatricals.” There it is! “W” is for “whistle,” and indicates a scene change. Different types of whistles for different scenes. I learn from an extant poem that the whistle is “shrill” and audible to the audience. I learn that the Prompter has a whistle around his neck to call for these scene changes, and a bell around his wrist to cue music. I wonder if this is where the term “bells and whistles” originates, from over-the-top scene changes and music as noisily called for by the prompter. I also realize this must be the root of the superstition not to whistle in a theatre. No one wants to be crushed under the weight of a scenic drop.

The promptbook keeps creating questions for me, and further research at the Ransom Center keeps providing answers. I know that there is a “boy ready with armor,” but what did that armor look like? Off to the stacks to see pictures of other “Richards” of the period and their armor choices since no pictures of Booth’s Richard are known. What music was likely being played here? How was gesture acting articulated in the 1860’s? Theatre is at a tipping point in this period, what side did Booth’s production fall towards? How did resident actors approach their scripts? What was it like for a traveling actor like Booth to perform five shows a week with an ensemble he’d only meet a few days before the run? The dive goes on and on, and  I’m reassured and guided by Eric and Visual Materials Circulation Coordinator Michael Gilmore as we keep uncovering, learning, questioning.

I remember to be grateful for the promptbook even though it sometimes gives me a shudder as I turn a page. I breathe, and keep my focus on unlocking the way we told stories in 1861. I think about the way that helps us as story tellers and story receivers today, and do my best to accept the unintentional gift, this magic mirror back into to a theatre in 1861, that a madman left behind.

“All quiet – after Richard tries twice to rise and cannot.”

The Hidden Room Theatre will present Booth’s Richard III in co-production with the Harry Ransom Center and presented by the glorious 1863 Scottish Rite Theatre in June.