If you have two numeric variables that are not linearly related, or if one or both of your variables are ordinal variables, you can still measure the strength and direction of their relationship using a non-parametric correlation statistic. The most common of these is the Spearman rank correlation coefficient, ρ, which considers the ranks of the values for the two variables. For example, consider the lengths and weights of a sample of five kittens:

The ranks of these values are in the following table:

You can determine if ρ is significantly different from zero by running a Pearson correlation t-test on the ranks of the two variables.

The following video investigates the relationship between age of shelter animals and the number of days they wait until they are adopted. 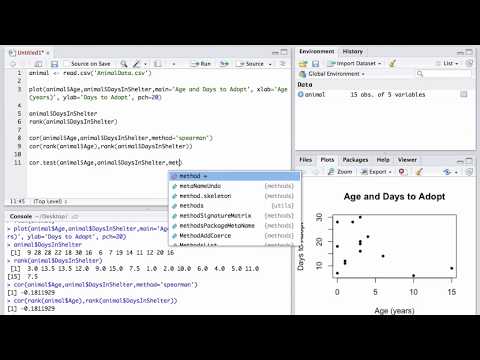 Sample conclusion: We have no evidence to suggest that the age of shelter animals is related to how long they spend in the shelter (ρ = -0.18, p>.05).