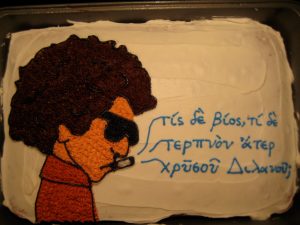 Here are some resources that Prof. Palaima has posted on everything related to Dylan (which can be a lot of things!), from readings of Dylan’s song lyrics to playlists to talks to articles and books reviews.

Palaima’s research on Dylan has been recognized by the Society for Classical Studies “Musical Classicists” roster, for having shared his “expertise in both music and classical antiquity with individuals writing or performing musical works that are set in the ancient Greco-Roman world, draw[ing] on ancient Greek and Latin literary texts, or featur[ing] classical figures and themes.”

Review of The Cambridge Companion to Bob Dylan (June 18, 2009) review in the Times Higher Education

Review October 14, 2018 Sugarland, TX show in the company of Gavin Garcia, Brian Doherty and Bernard Vasek. It links to the reviews of shows on Bob Links as do the reviews here following.

Review April 22, 2018 Nürnburg, Germany show in the company of Helena Tomas , professor at University of Zagreb.

Review of July 24, 2011 Canyon Lake, TX show in the company of Lesley and Danny Crooks.

Review of Albuquerque July 22, 2007 show in the company of Mike Palaima and Lindsay Palaima.

In commemoration of Martin Luther King Day, I here explain and read the lyrics of the song Bob Dylan wrote after the assassination of black civil rights leader and WW II veteran Medgar Evers on June 12, 1963 in Jackson, MS.

This is an mp3 audiophile that is a recording of Tom Palaima reading three songs of Bob Dylan: “Love Minus Zero/No Limit”; “Visions of Johanna”; “You’re Gonna Make Me Lonesome When You Go.”

Bob Dylan has been ‘accused’ of abandoning concerns about the ills and problems of society when he made the shift around 1965 from the traditional folk music scene to writing and performing his own at times deeply personal music.

There is also a controversy over whether Dylan’s lyrics can stand alone on their own as poetry.

Here I read the lyrics of selected Dylan songs from 1963 up to 2009. I provide minimal commentary aimed a contextualizing more than advancing any arguments.

These song poems include: “Ballad of Hollis Brown,” “I Dreamed I Saw St. Augustine,” “Señor,” “Blind Willie McTell,” “Foot of Pride,” “What Was It You Wanted,” “Love Henry,” “Not Dark Yet,” “Mississippi,” “Ain’t Talkin’,” and “Forgetful Heart.”

All of them reflect Dylan’s continuing and keen interest in the human condition, the human spirit and the human heart.

SONGS OF WAR INCLUDING DYLAN:

Here you can access a collection of war songs at:
http://dase.laits.utexas.edu/media/palaima/mp3/Songs_of_war_all_mp3.mp3

Lyrics for many of these songs with some comments are available here.

This mp3 has twenty songs of war that I use in my Myths of War and Violence Plan II seminar:

And here are readings of war poems from Aeschylus to the present (texts in attached pdf):

Three singer songwriters perform five songs of Bob Dylan and discuss with UT undergraduate students and professors Tom Palaima and Brian Doherty what these songs require of and what they give to singers who sing them and how they fit into America culture and our own lives.

UGS 302 Bob Dylan History Imagination is taught by Professor Thomas Palaima at University of Texas at Austin with funding from the School of Undergraduate Studies and the Armstrong Centennial Professorship in Classics in the College of Liberal Arts.

The event had three singer songwriters, Guy Forsyth, Joe Goodkin and Giulia Millanta, performing and discussing Dylan songs with students in UGS 302: how they approached the songs, why they chose the songs, what the songs required of them and what the songs gave to them and in general what the songs mean to performers and audiences over time.

Inspiration for the event came from hearing younger musicians perform Dylan songs at the Dylan&Us concert on March 10 2019, organized by Giulia Millanta at the One-2-One Club in Austin, TX for the benefit of the Health Alliance for Austin Musicians (HAAM).

And also to play Dylan songs in UGS 302.

Joe Goodkin “Up to Me”

Joe Goodkin “Not Dark Yet”

Thanks to Andrew K Smith (UGS 302 student) for editing the file.

Harvard Classics Professor, teacher since 2004 of the freshman seminar, “Bob Dylan”, and celebrated ‘Dylanologist’ Richard F. Thomas makes a compelling case for why the music and lyrics of Bob Dylan endure and inspire us.  Thomas discusses his new book Why Bob Dylan Matters with MacArthur Fellow and fellow Dylanologist and classicist Thomas Palaima, who likewise teaches courses on Bob Dylan and on music as social criticism, and Professor Daniel Goldmark, Director of CWRU’s Center for Popular Music Studies.

This event was co-sponsored by the Rock and Roll Hall of Fame Library and Archives and the CWRU Center for Popular Music Studies.

Enjoy readings from narrative poems in the Center’s collections, inspired by the exhibition “Stories to Tell: Selections from the Harry Ransom Center,” including:

As the 2016 winner of the Nobel Prize in literature, Bob Dylan became the first song writer to win the world’s most prestigious literary award, breaking another barrier in a long and protean career and assuring his legacy in our cultural history. But for an artist so prolific, evasive and expansive, how can such a legacy be usefully represented? What is important and what is not? To whom and to what ends?

Such questions strike at the heart of what it means to be a historian, an archivist and even a citizen. On March 20 and 21, 2017 The University of Texas at Austin will host “Bob Dylan: The Next Generation” for two special events that examine the grand questions of historiography as well as those that will continue to make Bob Dylan worth listening to, studying and debating for generations to come.

On March 20, Michael Chaiken, curator of the new Bob Dylan Archive, will host a 50th anniversary viewing of “Don’t Look Back,” the classic D.A. Pennebaker film documenting Dylan’s April- May 1965 concert tour in the UK. The film is significant for capturing Dylan on the verge of his contentious break from the folk scene (his famous electric set at the Newport Folk festival July 25, 1965) and already performing deeply personal and poetically visionary non-traditional songs that expanded the expressive possibilities of rock music. Ironically, the film is also significant for framing, and “freezing,” that moment in time, inviting questions of how film itself shapes our understanding of history in modern times.

On March 21, Chaiken will be joined by professors Thomas Palaima and Thomas Staley, two prominent UT scholars who have made their mark by working with archives, for a panel on the challenges of archiving called “Looking Forward by Looking Back.” Caroline Frick, founder and executive director of the Texas Archive of the Moving Image, will join in subsequent Q&A.  Archives are paradoxical in the same way that Thucydides, the first scientific western historian, conceived of history. We preserve the past to help us make sense of the present and guide us into the future. Bob Dylan is the best documented poet-songster in the history of humankind. In an age when data seem to overwhelm us, how will the Bob Dylan archives meet the challenges of enabling his words and songs and their many meanings to sing out to future generations?

This is a studio version of the lecture and the music for the Poetry on the Plaza presentation that I gave on March 1, 2006 at the Humanities Research Center (HRC = Harry Ransom Center, too). It had the title “Bob Dylan: Our Homer”.

I discussed and illustrated in recordings, as I repeat here with clear audio, the art of Bob Dylan as an oral poet and songster.

Dylan and his music are parts of a rich tradition going back to Homer and in the modern period reaching back to the 17th century in folk ballads.

Here I selectively play and discuss mainly live concert recordings and the recordings of singers (Martin Carthy, Charlie Patton, the Stanley Brothers, all the way to Warren Zevon) who inspired Dylan’s own songs or were singled out by Dylan himself in his concerts as special.

I hope you enjoy these masterworks and my commentary on them.

The topic will be “Harmonica Bob: The Ineffable Poetry of Bob Dylan.”

In it, I will discuss Dylan’s use of harmonica (an instrument that is very important in folk and blues traditions) in order to express meanings and feelings that cannot be said or to emphasize or create a tone for what has been said in sung words.

On Jan. 29, 1961, Bob Dylan, 19 years old, took a bus to Morris Plains, New Jersey, where he met for the first time his idol and inspiration Woody Guthrie, 48 years of age, who, almost five years before, in May, 1956, had been ‘involuntarily checked into’ Greystone Park Hospital with advanced Huntington’s Chorea.

In this talk, professor Palaima will examine these two tributes, considering the following questions: What would Woody Guthrie’s condition have been when Dylan met him?  What impact would Dylan’s finding out at this time about the range of Guthrie’s genius have had on Dylan? What would Guthrie’s end condition have taught Dylan about what is important in life with regard to fame, music, personal choices, creativity society and the human heart and soul? And how might this have affected, in large or small ways, where Dylan decided to go with his life and his music?

See, for example:  http://www.texasobserver.org/archives/item/15265-2665-alive-and-singing-the-truth  and

TODO Austin is a free-distribution, full-color, monthly newspaper that focuses on Austin’s multicultural community. The May issue is in distribution today.

The articles in the May 2015 issue, which features a beautiful full color photo of Dylan on its cover, are:

For your convenience I attach a

that excerpts the pages of writing about Dylan and his music.

The entire issue and back issues can be easily found here on the TODO web site.