Photo (CC): Astronaut Randy Bresnik took this photo of Tropical Storm Harvey from the International Space Station on Aug. 28 at 1:27 p.m. CDT. All other photos courtesy of the author.

Rumors about Texas gas shortages in the aftermath of Hurricane Harvey prompted irrational but intense desperation among Dallasites to immediately fill up their cars. As a result, pandemonium erupted in the Metroplex, bringing with it mile-long pileups at gas stations, epic Twitter rants, and #gasshortage. I couldn’t resist the urge to analyze what Dallas Twitter users had to say about the run on area gas stations in late August. The below word cloud shows the most popular words in the Dallas Twitterverse, where the size of the word is proportional to its usage. 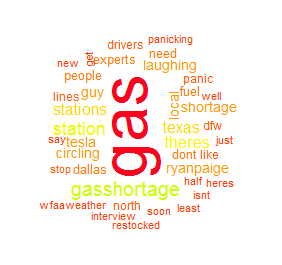 How did this happen?

Hurricane Harvey delivered a punishing blow to people in Texas’ coastal cities. Up to 450,000 Texans are expected to seek disaster assistance from FEMA, and as a lifelong Texan I know so many families in the Houston area who have been displaced by Harvey’s effects. One piece of Harvey’s aftermath is its impact on oil refinery and delivery, and that is what is relevant to Dallas’ completely unnecessary anxiety about #gasshortage. Harvey shuttered the nation’s largest oil refinery, reducing US refining capacity by roughly 20 percent. The Colonial Pipeline, which delivers gasoline from the Gulf Coast all the way up to New York, was also shut down on August 30th.

When I woke up on August 31st, I received a notification on my phone saying that “some DFW stations may run out of gas this weekend,” which was almost certainly inspired by the fuel supply in Houston and our reliance upon Houston for this fuel. By the evening of August 31st, here was the status of gas stations in my Dallas suburb of Richardson:

All this said, what factors link a 20 percent reduction in oil refining capacity to panic at the pump? I have a few hunches:

Parallels of the Dallas gas shortage to bank runs

Some theories about bank runs posit that panics occur because of informational asymmetries between banks and their customers. In the banking system, the informational asymmetry is that bankers can’t distinguish between the people who really need to withdraw money and the people who are merely nervous and withdrawing “just in case.” However, a massive quantity of people coming to the bank and demanding money (a bank run) robs the banking system of its cash on hand, triggering a banking panic.

In the case of gas in Dallas, there was an information asymmetry in that gas stations could not distinguish between people who really needed gas and people who filled up “just in case.” When a massive quantity of Dallasites all rushed to gas stations, they caused a new form of “bank run,” where the gas station was the bank and the fuel was the bank’s cash on hand.

To conduct this analysis, I wrote an R script at 4:20 p.m. on August 31st to scrape 1500 of the most recent tweets about the gas shortage. The search area for tweets was limited to a 5-mile radius of downtown Dallas. Here’s a picture of the search area:

Once I obtained the tweets, I used the same script to clean up the data for punctuation and stopwords such as a, an, and the; sorted terms by popularity; and constructed the above word cloud, where the size of the word is proportional to its popularity.

The events of #gasshortage were completely unnecessary and avoidable, but the DFW area still feels the effects weeks later. In late August, the Texas Railroad Commissioner reported that this panic over fuel shortages was artificially constructed by the nervous masses.

However, as of mid-September, my neighborhood gas station is still rationing its supplies, and a local gas station operator was sued by Ken Paxton’s office for charging $6.99 per gallon of gas.This is the power of panic fueled by news and social media: even though the top oil-producing state in the U.S. had plenty of fuel available, Dallas managed to drain out most of its supply within 48 hours.