On Jan. 30, 2018, the LBJ School of Public Affairs welcomed U.S. Army Lieutenant General Sean MacFarland. His talk was part of the Dean’s Distinguished Leaders Series, which brings the best and brightest of the public world straight to LBJ.

MacFarland, a three-star general slated to retire soon, spoke about his time serving at key posts over three decades of leadership in government and the military. Notably, from 2015 to 2016, he was commanding general of Combined Joint Task Force – Operation Inherent Resolve (OIR), the U.S.-led international coalition against the Islamic State of Iraq and the Levant (ISIL/ISIS).

Before diving into the risky business of commanding coalition forces against ISIS, MacFarland discussed a newsworthy moment on the homefront. As the 2016 presidential primary season was in full swing stateside, MacFarland made a big splash in national headlines. In a press conference, a CNN reporter asked him about the recent comments of a Republican candidate who had claimed that as president, he would “carpet bomb” ISIS into submission in Iraq and Syria.

In his response, unaware that the question posed by CNN was in reference to the recent comments of presidential candidates, MacFarland commented: “You know, at the end of the day, it doesn’t only matter whether or not you win, it matters how you win.”

He continued: “We’re the United States of America and we have a set of guiding principles and those affect the way [that] we as professional soldiers, airmen, sailors, and marines conduct ourselves on the battlefield.” It was a principled stand that would end up being politicized as a rebuttal to the presidential candidates.

MacFarland’s comments in the press conference were a touchstone of his strategy in Iraq. To avoid civilian casualties, the U.S. relied on intelligence, surveillance, and reconnaissance (ISR), precision bombing, and nighttime strikes. While the Russians and Iranians “were just throwing lead in the general direction of the area and devastating entire neighborhoods,” indiscriminately targeting civilians and combatants alike, the U.S. took every precaution to minimize casualties, MacFarland said, “We are on the moral high ground and that’s where we need to stay.”

“Weaponeering is a science and an art,” MacFarland said. His presentation was accompanied by jaw-dropping statistics: in his 11 months commanding the coalition, it flew 43,581 aircraft sorties, conducted 7,924 strikes, dropped 28,821 bombs, flew 6,366 ISR sorties, and killed 24,345 enemy combatants. 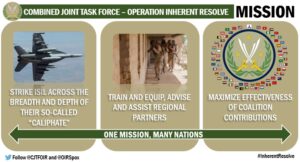 These numbers reflect the size and strength of the enemy. Unlike Al-Qaeda, ISIS was not just an extremist insurgency. It created a “proto-state” with “proto-armed forces.” ISIS extended its writ across the territory it controlled. Its foot soldiers fought conventionally, “like a first world war army,” MacFarland noted. This left the Iraqi army and government ill-prepared, as they had grown acclimated to counterinsurgency (COIN) operations.

The counter-ISIS campaign has relied on a “by, with, and through” strategy, in which the U.S. military equips, trains, and advises indigenous forces. In theory, this puts fewer U.S. soldiers in harm’s way, builds the capacity of regional partners, and hardens the will of local forces.

It was no small task. Training thousands of tribal warriors, Iraqi soldiers, counterterrorist (CT) units, Peshmerga fighters, and police officers came at a premium. MacFarland estimated the “by, with, and through” bill at 1.52 billion dollars, to be footed by the American taxpayer. With regional militias armed to the teeth and Iraqi security forces consolidating their gains, the U.S. must turn its attention to what’s next.

The Future of Iraq, Syria, and ISIS

As the campaign to eradicate ISIS succeeded, areas of the caliphate were liberated. Unfortunately, as OIR accomplished its mission, the cohesive forces holding the coalition together began to fray. MacFarland drew a distinction between international nation-state forces participating in OIR and the regional stateless groups.

The “centripetal forces” of defeating ISIS have held together a patchwork of tribes with different nationalities, backgrounds, religions, and ethnicities. As the coalition nears its goals, MacFarland noted, everything has begun to unravel. Groups are reverting back to the “centrifugal forces” that have historically sowed hatred and inspired conflict in the Middle East, such as tribalism, ancient divisions, and tendencies towards territorial expansionism.

“We were the only ones under my command whose primary goal was the defeat of ISIS,” MacFarland said, referring to American forces and the other nation-states involved. “Other partners [such as tribal militias] would take advantage of [the campaign] to jockey for control after ISIS was defeated.” Essentially, actors were looking to carve out their own spheres of influence from liberated territory. 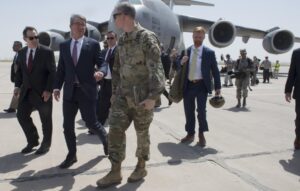 MacFarland said that as the U.S. and its international partners near victory, everyone must think about the next diplomatic and political steps. It will be important to appease different groups and ensure that further conflict does not ensue. During his time at the helm of OIR, MacFarland worked closely with Stuart Jones, the U.S. ambassador to Iraq, “cutting deals with different interlocutors…[and showing] there was a unified plan coming out of Washington.”

The post-caliphate phase of rule in Iraq and Syria will be fraught with unrest, MacFarland predicted. As a consequence, the U.S. must stay engaged. Just a couple of weeks after MacFarland’s talk, U.S. Secretary of State Rex Tillerson announced that U.S. forces would stay in Syria to shore up the power of local forces and ensure “the full and complete defeat of ISIS.”

As its geographical presence and hard power wane, ISIS will not consign itself to irrelevancy. Instead, MacFarland said that the group will fall back on the savage terrorist attacks that made it a household name across the world.

MacFarland cited a heinous attack at a downtown Baghdad shopping center on the Islamic holiday Eid al-Fitr. This attack, waged by the so-called Islamic extremists, indiscriminately slaughtered worshipping Muslims. It was a symbolic display of the senseless calculations, wanton whims, and perverse religious pretenses of a terrorist group that professes to conduct itself in the name of religion.

In the Q&A, MacFarland showcased his versatility, bouncing between topics as diverse as the Tet Offensive, U.S.-Turkey relations, the role of intelligence-gathering in warfighting operations, and the necessity of new authorities for the Middle East. One UT professor scrutinized MacFarland’s estimated costs of OIR. Another asked about the potential failure of the Mosul Dam and its wide-reaching consequences.

MacFarland closed his talk by addressing the younger crowd in the room. “There are lots of problems out there. Don’t just admire them, solve them. Tell people what needs fixing and how to fix it,” he said. “That’s public service – making things better.”