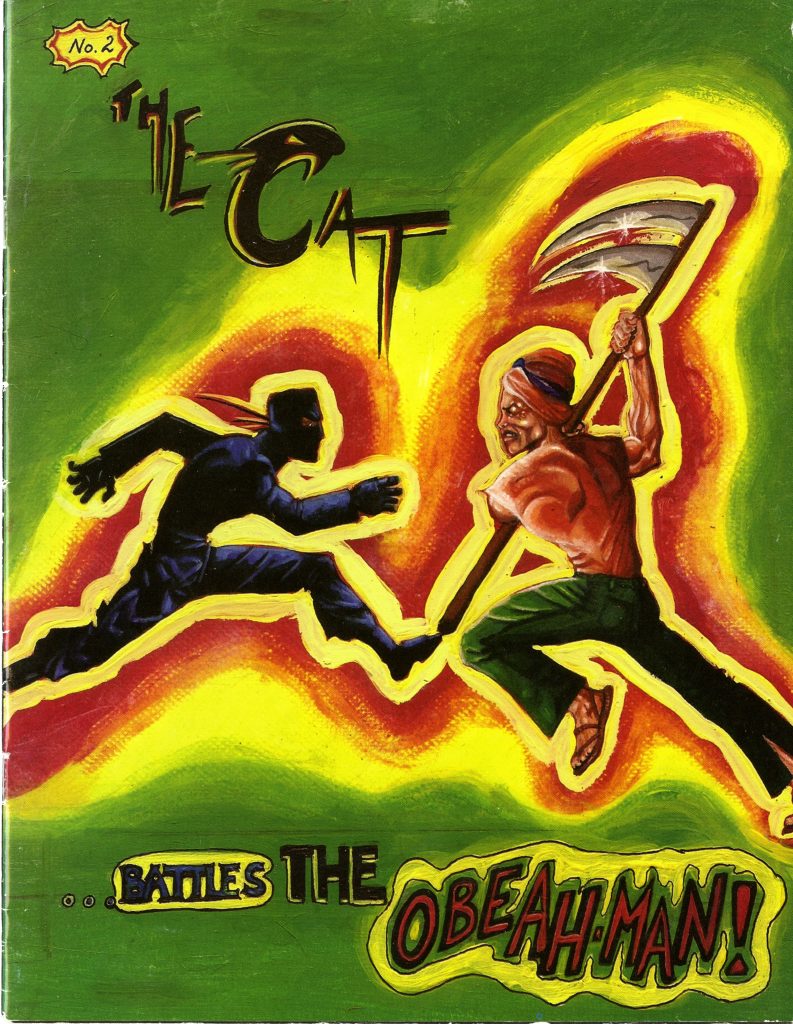 In 2017, the BDA began a strategic initiative to increase the Benson’s acquisition of rare books featuring Black Diaspora subjects. In its first year, this project brought in eight new titles, including three books from Jamaican graphic novelist Andrew Francis’ series, The Cat.

Alexandria Watson, the 2018-2019 AKA Scholars Black Diaspora Archive Intern, highlights the series below.

The Cat comic series is written and illustrated by Andrew Francis. The Cat aka Jonathan Jacques, trains in martial arts and fights crime with the help of his friends. Francis created this character when he was a child, and decided to make the super-hero into a series because of the love his father had for the character above all of the Andrew’s other creations.

In our collection, we have 3 volumes (NO. 2-4) The Cat Battles the Obeah Man, Jonny Has a Brother?, and Karate Revenge. The first two books are about The Cat’s battle against the Obeah Man, who kidnaps a young school girl. During their fight, a shattering family secret is revealed, which The Cat confronts in the second book, Jonny has a Brother? In Karate Revenge, The Cat avenges his girlfriend’s brother, Reggie, who was attacked by hit men ordered by a dirty politician. 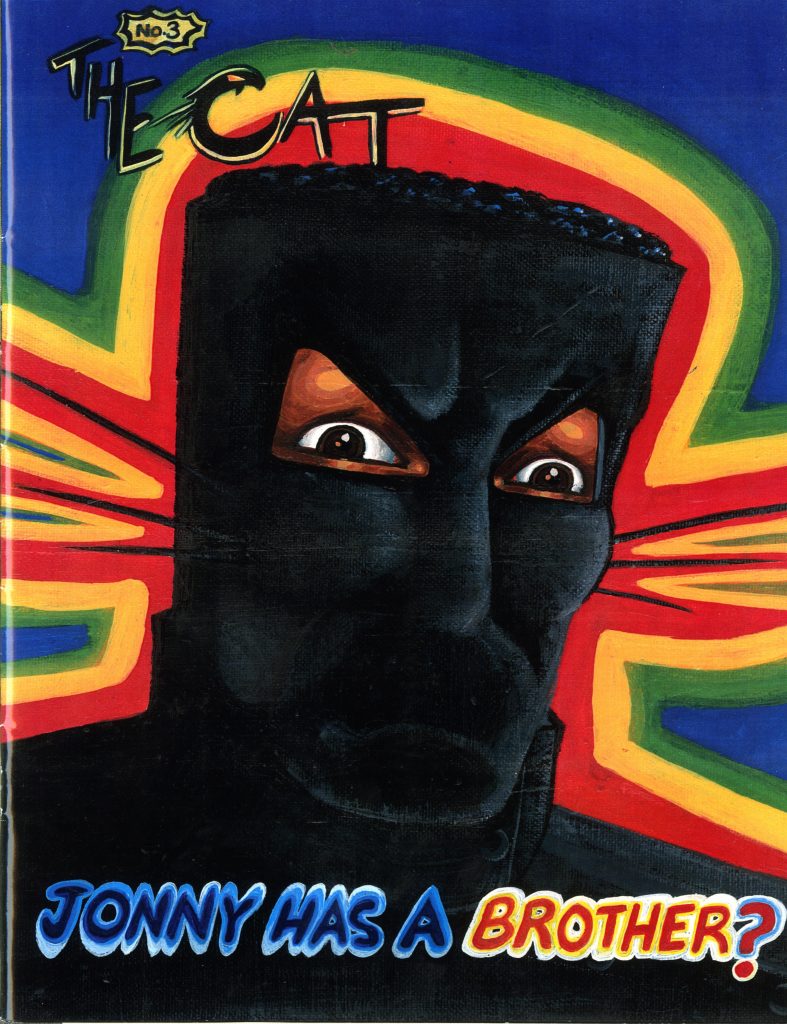 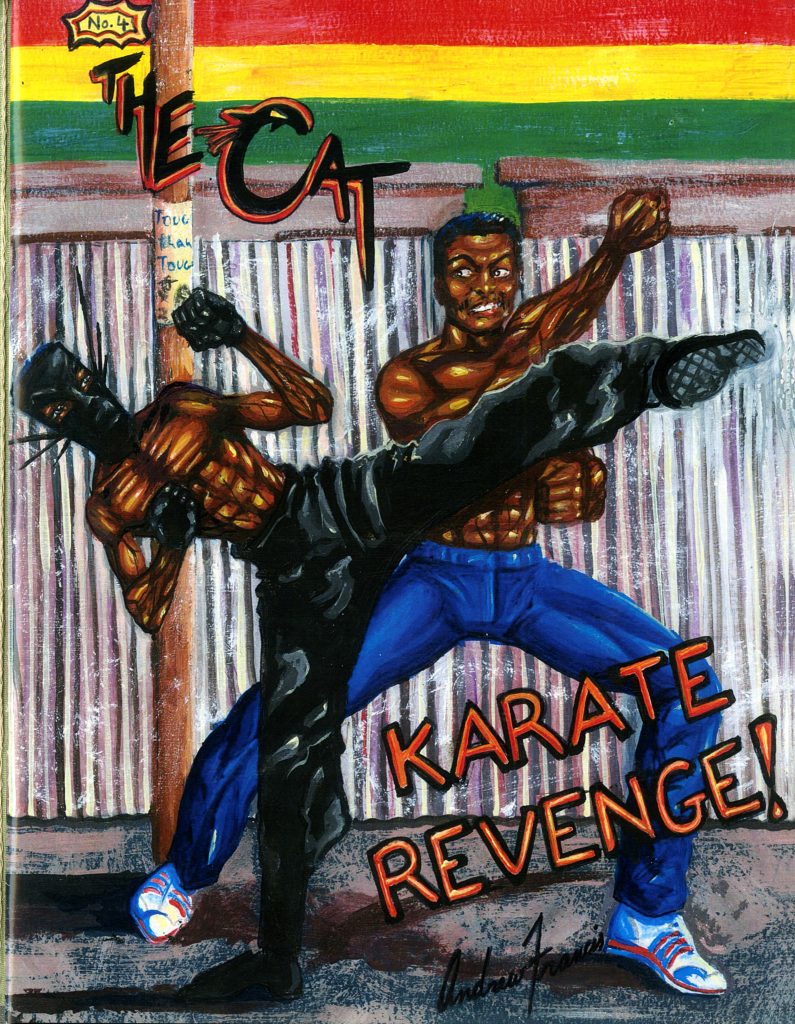 I appreciate that although this comic was created recently, it gives off such an old school comic book vibe. While the story is set in the present, the storyline reminds me of old marvel comic books. While doing some research on Francis, I learned that he was actually influenced by Black Panther when creating his characters because he used to only write white superheroes. There is so much vibrance throughout the comic, and it’s amazing how you can see all the details in Francis’ drawing. As soon as I saw the cover, so much excitement came over me. I did not really grow up reading comic books, but I admire them from how impactful they have been for my younger brother; so I knew I couldn’t pass the opportunity to read these.

What I love the most about this comic is that all of it is written in Jamaican Patois, which makes the whole story more authentic and fantastical. This had me thinking about language and how translations can change meanings. The story would be completely different if it was translated into American English. I appreciate how Francis refused to write in English as an effort to normalize Patois because it means so much to Jamaicans to have that representation and to read about a superhero that looks and speaks like them. Especially since Jamaican language is not accepted as a language and usually used for entertainment. A common place for us to hear or see Patois is in music. Dancehall and Reggae has had a presence in the mainstream since the early 70s and continues to make waves today. A notable artists we see using Patois and the Caribbean influence is Drake, which raises concerns of appropriation and exploitation because non-Jamaicans use it as a slang and still perceives it as an “improper way of speaking”.  That stigma is even present in Jamaica, where speaking Patois is relegated to informal conversations, like with friends and family. While Jamaican Standard English, which is the only official language, is used in formal settings like work, school, and with strangers.

Francis puts Patois in another context—a comic book, which is something people interact with daily. Writing his comics in Patois is a great step toward normalizing the language. It also resists the notion that Patois is just slang and rejects the racist stereotypes that are attached to it. Patois is a language and can be used to tell great stories, like this one. Most importantly it connects Jamaicans all over the world, which is why The Cat series are an important and special addition to our collection.