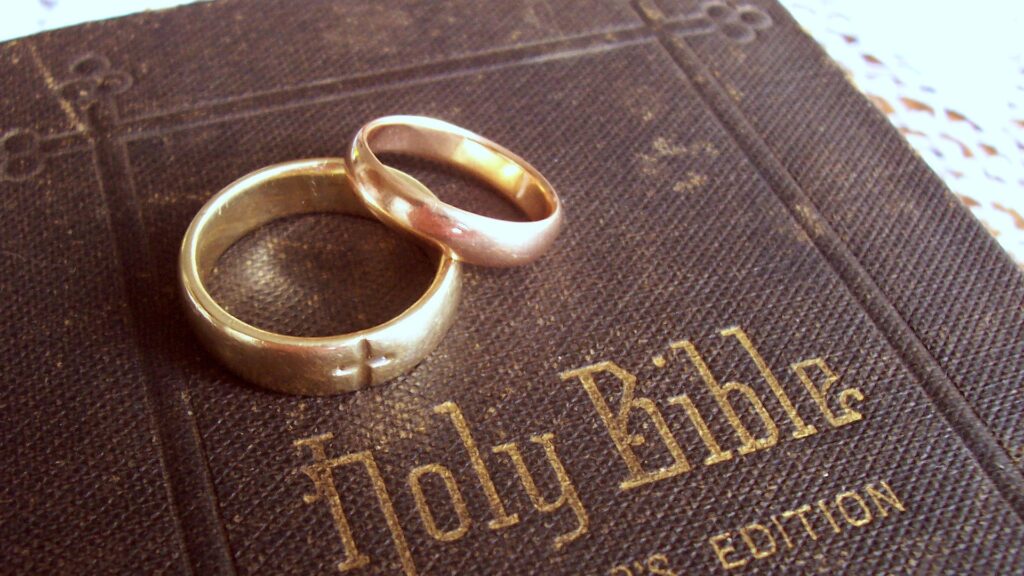 Evangelicals and divorce. For a new study appearing later this month in the American Journal of Sociology, Demographers Jennifer Glass at the University of Texas and Philip Levchak at the University of Iowa looked at the entire map of the United States, going county by county, to examine where divorces occurred in 2000 and what the characteristics of those counties were. Their work confirms that one of the strongest factors predicting divorce rates (per 1000 married couples) is the concentration of conservative or evangelical Protestants in that county. 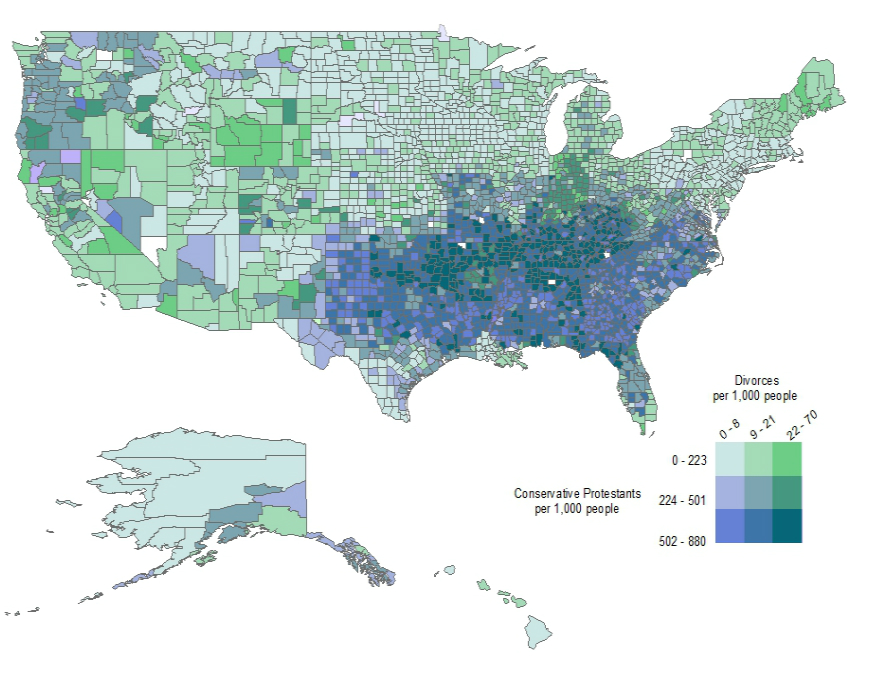 Previous discussions of this puzzling paradox have focused on three alternative explanations.

Is it poverty? Some scholars argue that it has nothing to do with religious beliefs and practices, but reflects the fact that conservative religious groups are most concentrated in rural and Southern counties, which tend to have lower wages than the national average and higher rates of poverty. And research does show that such conditions do raise the risk of divorce. Yet even controlling for income and region, divorce rates tend to be especially high in areas where conservative religious groups are prominent.

Is it higher rates of marriage overall? Others believe that the higher divorce rates among religious conservatives are due to their endorsement of marriage as a good thing in and of itself and their disapproval of cohabitation as a replacement. This means that some unstable or troubled couples go ahead and marry who might simply cohabit if they lived in counties with less religious disapproval. Since cohabitations often dissolve relatively quickly but do not show up in divorce statistics, some scholars suggest that marriage in conservative religious communities is less selective of strong relationships. But in Glass and Levchak’s study, the link did not hold up. So even though conservative Protestants are much less likely to cohabit, this didn’t make a difference. There was no evidence that cohabiting would have “weeded out” the less promising unions

Is it just regional culture in religiously conservative Southern states? A third explanation offered before is that the dominance of religious conservatives in the South reflects a regional culture that also promotes relatively high rates of interpersonal violence – factors that destabilize marriage. But while high rates of violent crime do increase divorce rates, Glass and Levchak found that a careful analysis of variations nationally reveals that this explains none of the association between religious conservatism and divorce.

New answers: early marriage and low income among religious conservatives are part of the story. Unpacking these variations, Glass and Levchak found that the high divorce rate among conservative religious groups is indeed explained in large part by the earlier ages at first marriage and first birth, and the lower educational attainment and lower incomes of conservative Protestant youth.

Explains Glass, “Restricting sexual activity to marriage and encouraging large families seem to make young people start families earlier in life, even though that may not be best for the long-term survival of those marriages.” In an earlier report to the Council on Contemporary Families, economist Evelyn Lehrer from University of Illinois at Chicago explained that every year a women postpones marriage, right up until her early 30s, lowers her chance of an eventual divorce.

Young people of every religious belief—or none—are influenced by cultural climate. Glass and Levchak believe that this comes from living in a cultural climate where most people expect to marry young and there is little support from schools or community institutions for young people to get more education and postpone marriage and children. Abstinence-only education, restrictions on the availability of birth control and abortion, support for marriage as the resolution of unexpected pregnancies, and distrust of secular education (especially higher education) among the populace in religiously conservative counties work to create an environment where young people of every religious belief – or none – tend not to pursue higher education or job training, and instead to engage in early marriage and child-bearing.

What else do we know? Council on Contemporary Families senior fellows Philip Cowan and Carolyn Cowan’s research has shown that marriages started with unplanned pregnancies are at higher risk of divorce. And Lehrer’s earlier CCF report shows that delaying marriage helps to reduce risk of divorce.

For information on marriage and poverty, see the recent CCF briefing report: “Promoting Marriage among Single Mothers: An Ineffective Weapon in the War on Poverty” by Kristi Williams, Associate Professor of Sociology, The Ohio State University. Contact: Williams.2339@osu.edu or 614-688-3207.

Save the Date for the CCF Annual Conference

CCF’s 17th anniversary conference will take place on April 25-26, 2014, at the University of Miami, Coral Gables, Florida: Families as They Really Are: How Digital Technologies Are Changing the Ways Families Live and Love. For details visit: https://contemporaryfamilies.org. Complimentary press registrations are available for the CCF conference; please contact Stephanie Coontz for more information at coontzs@msn.com, cell 360-556-9223.