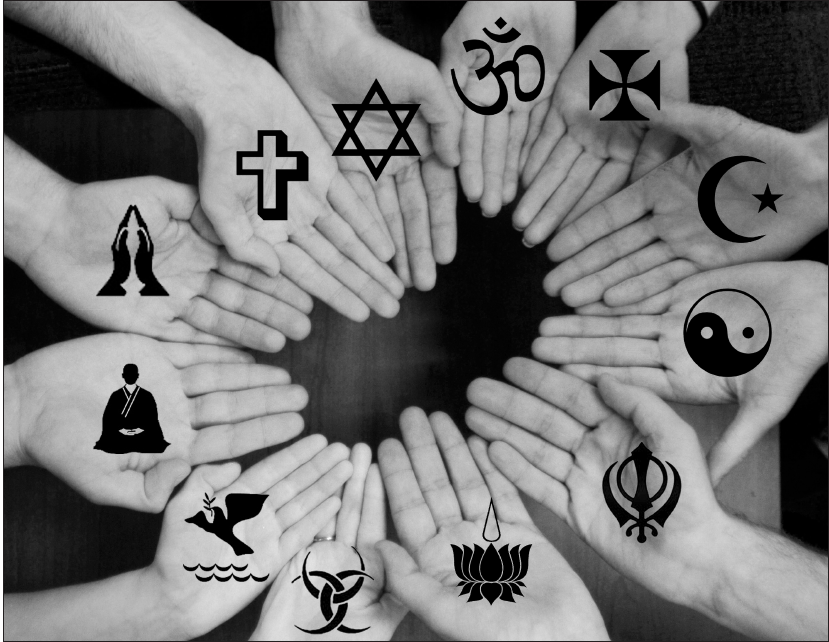 The Civil Rights Act of 1964 not only ushered in stronger federal protections for racial and ethnic minorities and women, but also for religious minorities. Antipathy toward Catholics and Jews in the US was a persistent and prevalent theme through much of American history. It was common for these groups to be labeled “un-American” and even categorized as “non-white.” Members of these religions were often discriminated against in hiring and in admission to institutions of higher learning (this was especially common for Jewish applicants) and excluded from many neighborhoods, clubs, and political positions. From the late 19th through the mid-20th century, organized hate groups, most notably the Ku Klux Klan, used the threat of violence to intimidate not only African-Americans but Jews and Catholics as well.

After World War II, these restrictions and prejudices eased somewhat. By 1955 the now-classic essay Protestant Catholic Jew could proclaim that although these three religions were the primary sources of identity in America, they were now “alternative ways of being an American” rather than two of them being seen as Un-American.

Still, anti-Semitism and anti-Catholicism persisted. In the 1960s, some commentators worried that President Kennedy, a Catholic, would take orders from the Pope. In the 1970s, President Richard Nixon was recorded making several anti-Semitic comments. And even today nativist hate groups continue to perpetuate centuries-old hostilities against Catholic and Jewish Americans. But the Civil Rights Act did give these minorities protection against outright exclusion and discrimination, and other religious minorities have also looked to it for security as the American religious landscape has diversified.

Religion scholars consider the United States to be an anomaly on the modern religious scene. Compared to other nations at similar levels of modernization, the United States stands out as highly religious. For example, in Western Europe about three-quarters of the population profess a belief in a God or higher power (with this proportion significantly lower in some individual nations). In America, by contrast, 90 percent of adults profess such a belief. These American numbers have remained fairly stable, with only small long-term declines, over the past fifty years.

However, one major measure of religiosity has changed significantly over that time period: religious belonging, or identifying with a particular religion rather than simply holding religious beliefs.

Currently 80 percent of the U.S. adult population identifies as belonging to one of the 3,500 groups that make up the American religious landscape. Religion scholars categorize these groups in different ways, but one of the most popular classifications divides them into six major American religious traditions: Evangelical Protestants, Mainline Protestants, Black Protestants, Catholics, Jews, and Other Religions. Twenty percent of Americans fall into a seventh category, which sociologists call the ‘religious Nones’ – those who identify with no religious tradition even if they do believe in God or a higher being.

The distribution of Americans among these various groups has fluctuated and changed over the past 50 years. Figure 1 shows these trends in affiliation from 1957-1971 using Gallup polling data and Figure 2 shows these trends from 1972-2012 using data from the General Social Survey (GSS). 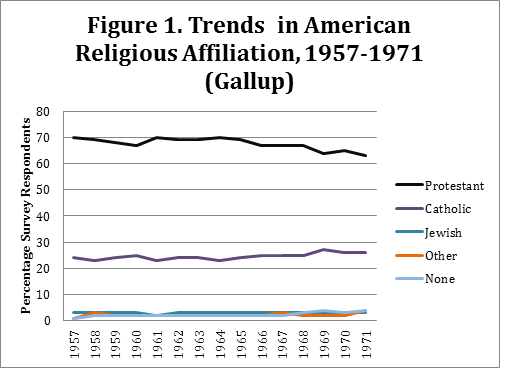 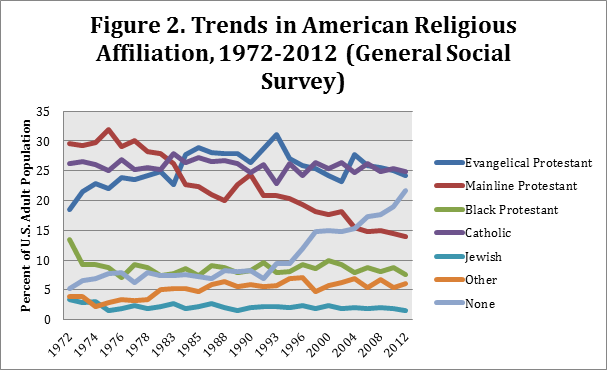 Religious groups differ not only in their beliefs but in their place in the socioeconomic and educational hierarchy. Some groups have been upwardly mobile during this time period while others have experienced more limited progress.

In the 19th century, white Catholics, especially Irish immigrants, were over-represented among the poor. But in the 20th century, especially since the 1960s, white Catholics have experienced unprecedentedupwardmobility. They now closely resemble Mainline Protestants on socioeconomic measures, with a median net worth of $156,000 compared to Mainline Protestant’s $146,000. Latino Catholics, by contrast, have a net worth of $51,500, substantially below their white Catholic counterparts. White Catholics have also spent more time in school (14 years on average) than their Latino counterparts (12.5 years).

Evangelical Protestants remain nearthebottom of the economic ladder with a median net worth of $82,400. They average 13.2 years of education, above Latino Catholics but below the national average.

The Non-Affiliated (or religious Nones) are also below the U.S. median net worth and median education level, with a median of only 12.7 years of education. Less than 10 percent of this group holds an advanced degree. Only Black Protestants and Hispanic Catholics have lower levels of educational attainment than “Nones.”

Religion and Union Formation and Dissolution

Religion is popularly thought of as a social institution that encourages marriage and family growth, and conservative religious traditions are especially supportive of “traditional” family forms and values. But there are some interesting and not always predictable variations among and within different religious groups.

Thus the common conservative argument that strong religion leads to strong families does not hold up. Some have argued that evangelical Protestantism (the typical example of “strong religion”) is correlated with low socioeconomic status, and that this explains the increased risk of divorce. However, new research by Jennifer Glass and Philip Levchak suggests that evangelical Protestants’ cultural encouragement of early marriage and discouragement of birth control and higher education attainment explain the higher divorce rate in counties with a larger proportion of evangelical Protestants. In fact, living in such counties increases the likelihood of divorce for all couples, regardless of whether they themselves are evangelicals.

The most dependable way for religious groups to maintain or grow their membership is through sexual reproduction. Differences in fertility rates among religious groups are a large part of this story.

The ability of religions to retain the affiliation of individuals as they age is another key to maintaining or growing their share of the United States population. Nearly three-quarters of American adults have the same religious affiliation as their parents, but this means that more than a quarter of American adults have left the religious tradition in which they were raised.

Since the passage of the Civil Rights Act of 1964, religious minorities, particularly Catholic and Jewish Americans, have gained greater acceptance as part of the American religious mainstream. At the same time, America’s religious landscape, like its racial-ethnic one, has diversified over the past half century. The many varieties of Protestants are part of an ever-expanding religious mosaic that includes Jews, Catholics and a growing presence of Buddhists, Hindus, Jains, Mormons, Muslims and Sikhs, along with increasing numbers of individuals whose spiritual beliefs are not anchored in any particular religious affiliation. Americans have certainly become more tolerant of a wide range of beliefs, but in this diverse environment the Civil Rights Act remains an important source of protection for religious (and non-religious) minorities.

Chokshi, Niraj 2013. “Religion in America’s States and Counties in 6 Maps.” The Washington Post.

Keister, Lisa A. 2011. Faith and Money: How Religion Contributes to Wealth and Poverty. Cambridge University Press.