A briefing paper prepared for The Council on Contemporary Families by David A. Cotter, Department of Sociology, Union College, cotterd@union.edu.

The General Social Survey[i] has been asking a set of four questions about gender ideology since the mid 1970s. These cover the relative suitability of women and men for politics, whether or not families should have a breadwinner/homemaker division of responsibilities, and whether mothers’ employment is harmful to children. From the mid-1970s to the mid-1990s, the answers to each of these trended in an egalitarian direction. Then from the mid-1990s to the early 2000s this support for gender equality stalled, even reversed. Since the early 2000s, however, all have returned to an egalitarian direction – and in every case are now above their mid-1990s peak. (See Figure 1.) 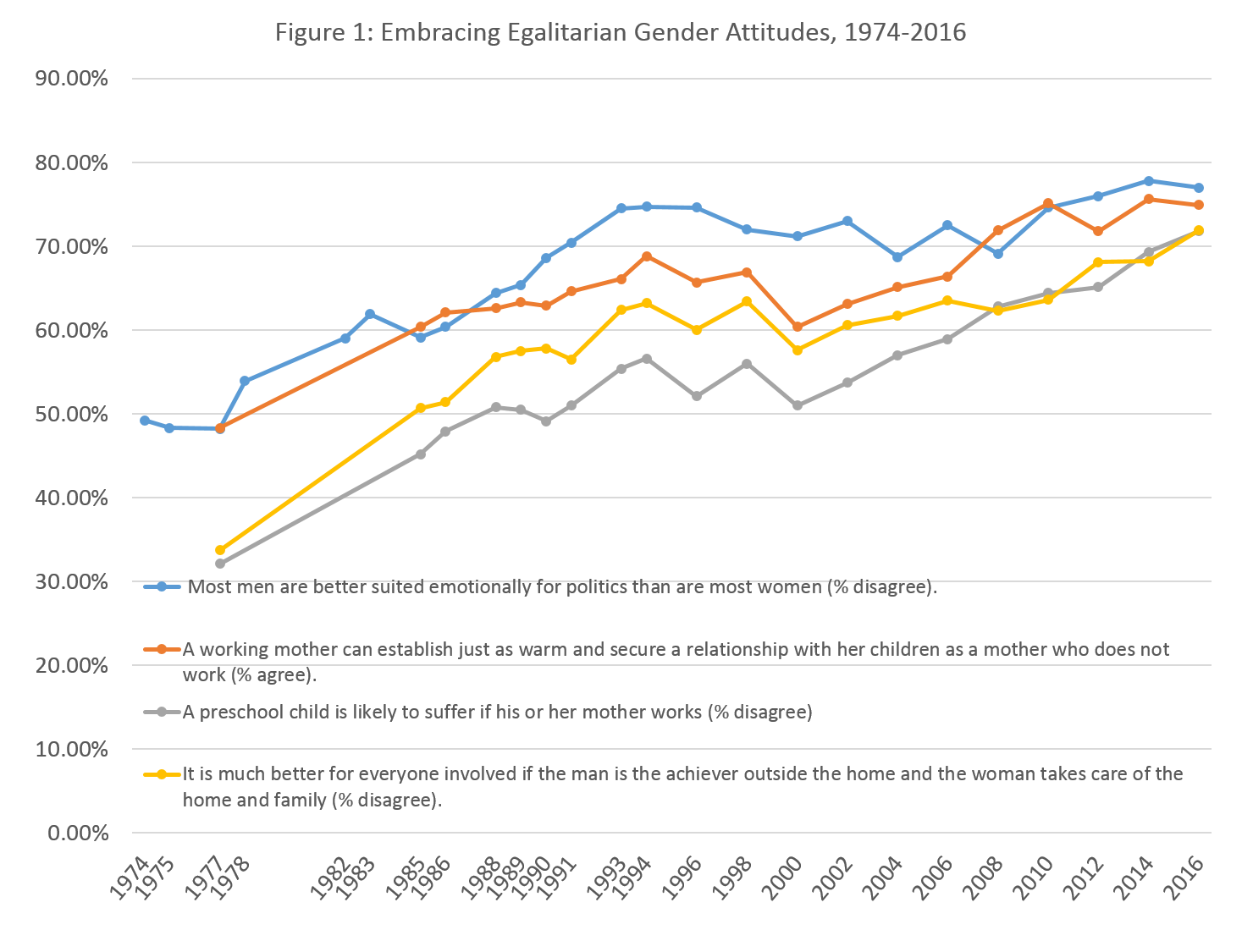 The Gender Ideology Index  my colleagues Joan Hermsen, Reeve Vanneman and I use is comprised of these four questions, which have been asked most consistently in the General Social Survey since the 1970s. For each egalitarian answer a respondent gets one “point,” so that someone who answered all four questions in an egalitarian way would get four points, and someone who answered all four in a traditionalist way would get a score of zero. The index now allows us to trace almost forty years of change. As with the items that make it up, it charts a pattern of rapid change from the 1970s up to the mid-1990s, a stall, and then a resumption of the trend toward egalitarianism. See Figure 2. 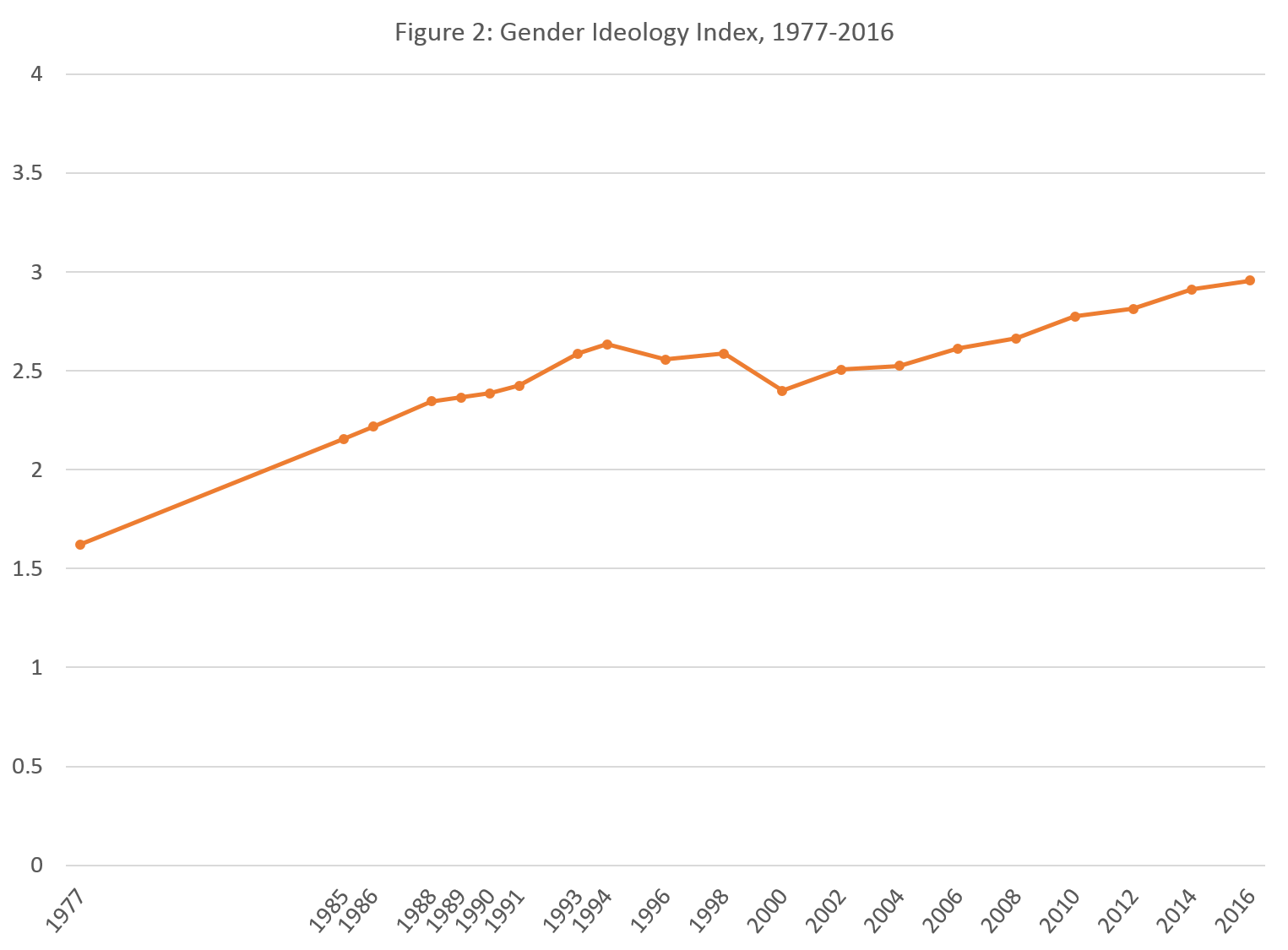 Gender Ideology by Gender
Gender differences in the Gender Ideology Index are, for the most part, relatively unremarkable. For nearly all of the series men are slightly (but significantly) less egalitarian than women. This remains true.  However, it is notable that the gap has now narrowed from what was nearly its widest point in 2012 to its smallest point in 2016. In addition, most of the change in the last few years is attributable to men’s “catching up” with women’s egalitarian attitudes. See Figure 3. 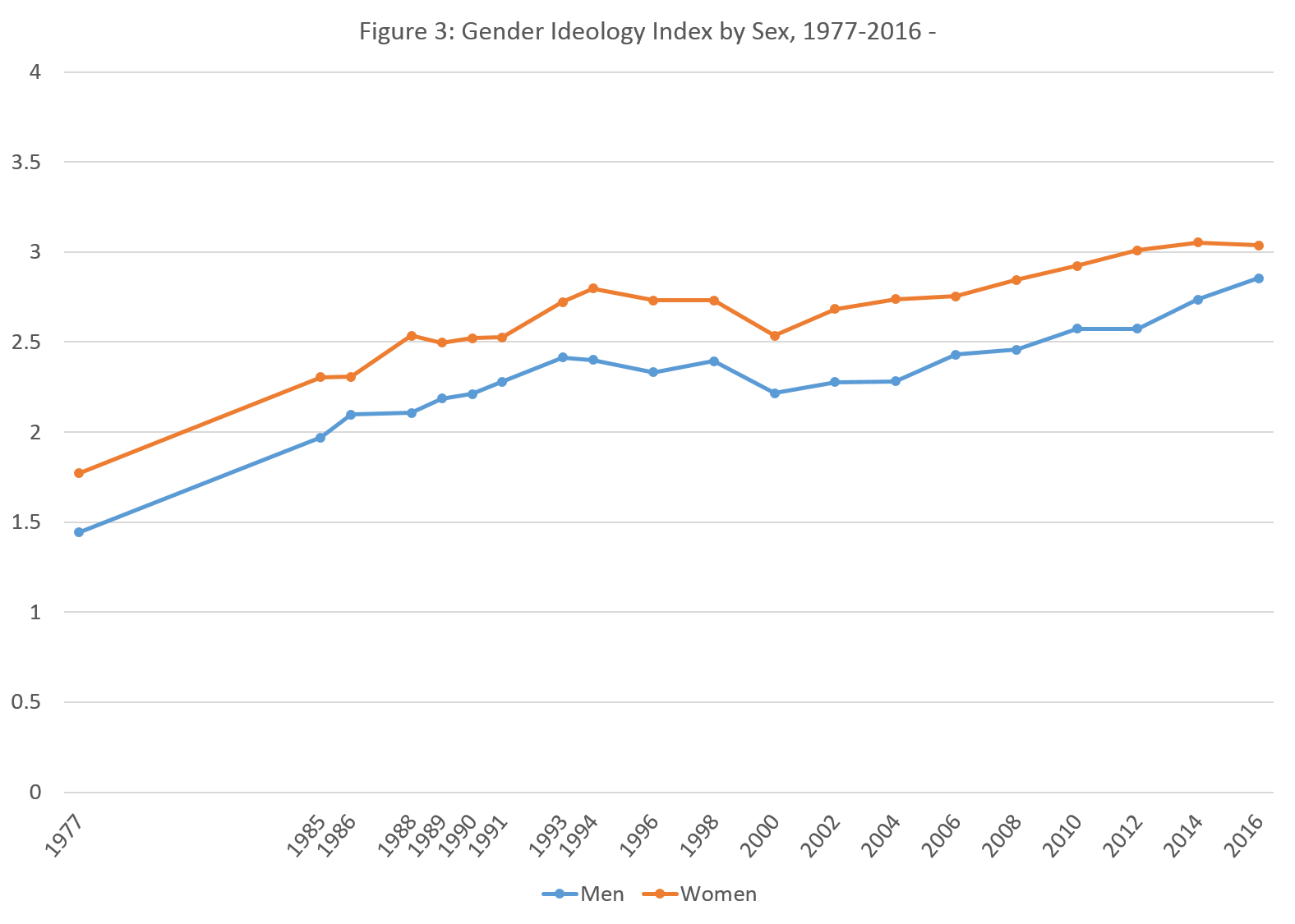 Gender Ideology and Generation: More Evolution than Revolution
Further analysis reveals that much of the change happens between generations – something that is particularly true in the post-stall period where individual generations show little secular trend. The fact that the Greatest Generation is fading from the survey and being replaced by Millennials after 2000, and especially since 2012, seems to be what is driving the movement toward egalitarianism. But those large differences between generations are less pronounced among the more recent cohorts: The difference between the Greatest Generation and Baby Boomers in 1977 was nearly as large as the whole change from 1977 to 2016, but the differences between Baby Boomers, GenXers, and Millennials barely as large as the overall change from 2012 to 2016. See Figure 4. 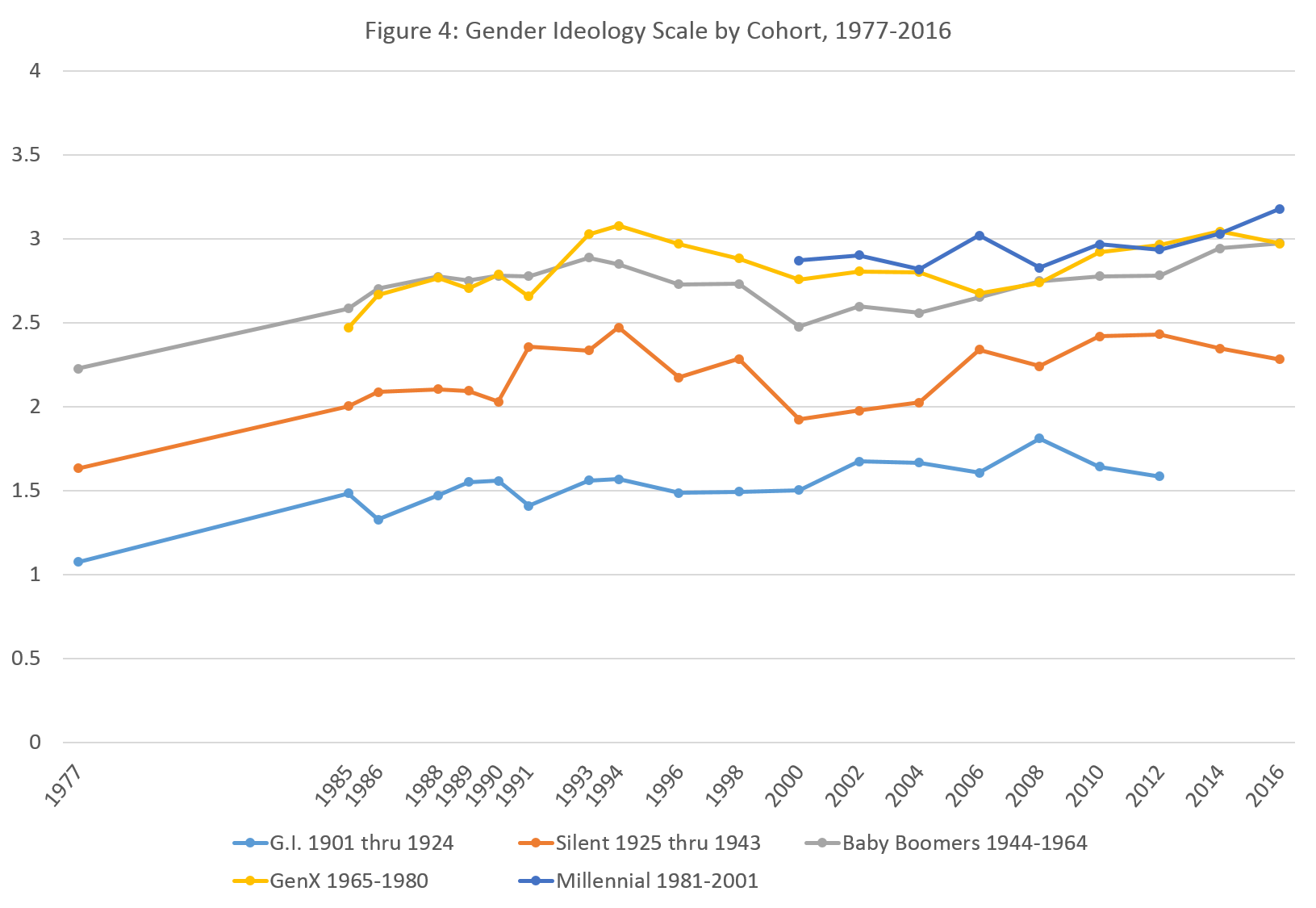 Cotter, David A., Joan M. Hermsen, and Reeve Vanneman.  2016. “Back on Track? The Stall and Rebound in Support for Women’s New Roles in Work and Politics, 1977-2012.”  research brief for the Council on Contemporary Families (https://contemporaryfamilies.org/gender-revolution-rebound-brief-back-on-track/).

[i] The General Social Survey is a nationally representative survey of the U.S. population conducted regularly (annually or biennially) since 1972.  It is among the best sources for ongoing social science data on Americans’ attitudes about gender and a number of other issues. Yearly sample sizes in this analysis range from 904 in 2004 to 1,984 in 2006 (https://gssdataexplorer.norc.org/).