A briefing paper prepared for the Council on Contemporary Families by Arielle Kuperberg, Associate Professor of Sociology and Women and Gender Studies, UNC Greensboro. 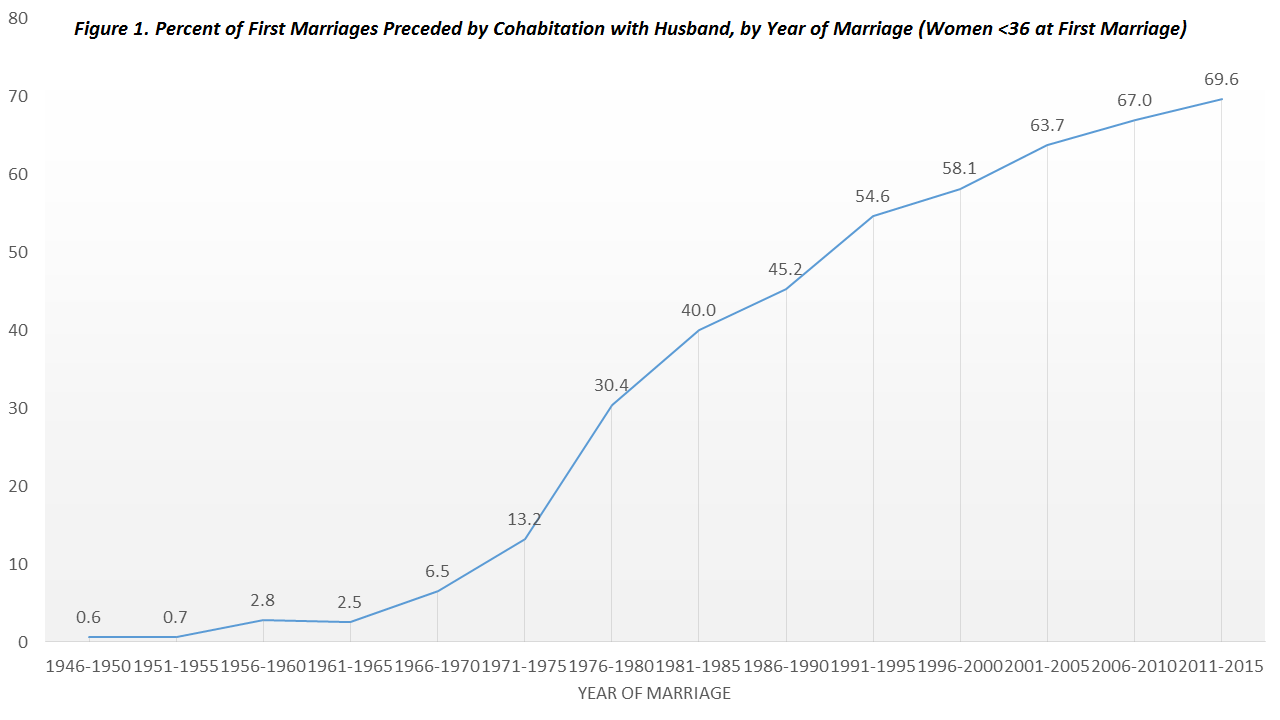 As I show in a forthcoming article in the journal Marriage & Family Review based on an analysis of national data on more than 13,000 women who married between 1956 and 2015, the characteristics of couples who live together before marriage have changed over time. Despite the widespread acceptance of premarital cohabitation, its practice has changed in ways that reflect a growing divide between Americans with a college degree and those with some or no college education. This change has interacted with differences in premarital cohabitation between more- and less-religiously-observant Americans in some surprising ways.

Early cohabitation rates: Only small differences between more- and less-educated Americans. Throughout the earliest period, from 1956 to 1985 (see Figure 1), when premarital cohabitation was still practiced by a minority of couples, the few couples who lived together before marriage generally belonged to one of two distinct groups. One was composed largely of couples with the lowest level of education: 27 percent of premarital cohabitors had less than a high school education when they moved in together. But an even larger group of early cohabitors had higher levels of education; 31 percent of cohabitors had at least some college education when they moved in together.

Whether college grads or people without a high school degree, cohabitors transgressed powerful social norms when they decided to live together before marriage. This is likely for different reasons: The least educated women may have delayed marriage until they were more financially stable or to save money for a wedding, while more highly educated women were more likely participating in a new countercultural trend that stemmed from the sexual revolution of the 1960s. Still, overall there were no significant differences between rates of premarital cohabitation among couples with different levels of education during the period from 1956 to 1986.

When rates of cohabitation began to change by education. Beginning in the late 1980s, however, premarital cohabitation began to grow most rapidly among the least educated Americans. Between 1986 and 2000, premarital cohabitation rates grew more quickly among couples who had not completed high school than among any other group. At the next levels of education, differences in cohabitation rates remained small. Their rates grew more slowly, and there wasn’t a big difference among couples with at least a high school degree over this time period.

All that growth meant that, starting in 1995, a majority of first marriages have begun with premarital cohabitation. Here’s where a new educational divergence occurred: Since 2000, cohabitation rates of the most educated couples have grown markedly more slowly than those of all other educational groups – people with high school diplomas and even ones with some college. By 2011-2015, women who married directly, without first cohabiting, were a minority in every educational group. Even so, marrying directly was twice as common among women with a college degree as among women who had a high school diploma or less. More than 40 percent of women with a bachelor’s degree married in the so-called “traditional” way, without having first cohabited. But fewer than 20 percent of women who had never attended college did so.

In other words, although acceptance of premarital cohabitation is equally high among highly-educated as among less-educated Americans, the actual rates of cohabitation among couples with a bachelor’s degree or higher are much lower than those of any other educational category. College-educated couples, often considered the group most likely to challenge traditional relationship and sexual norms, are now the group most likely to practice the traditionally “respectable” route to marriage – with women moving in with their husbands only after the wedding.

Religion, Education, and Cohabitation. Direct marriers became an increasingly select group in another way as well, as you can see in Figure 2. Not only did they tend to be more educated than average, they were also more religious. In 2011-2015, 73 percent of women who married without first cohabiting attended religious services at least once a month, compared to only 46 percent of premarital cohabitors. While almost a third (29 percent) of women who cohabited before marriage never attended religious services, this was true of only 10 percent of women who married directly.

These figures suggest that in today’s social and economic environment, it has become harder to act on one’s personal values in the absence of the good economic prospects conferred by a college education. The majority of young adults today believe that living together before marriage is okay, and research from the early 2000s found that these rates do not differ by education. But among those who do not share this acceptance of cohabitation yet lack the high levels of education associated with stronger labor markets and greater financial stability, contemporary economic circumstances make it harder to live up to their values. The highly religious may sometimes marry even without that financial stability due to the strong social disapproval of their peers and a belief that “God will provide.” But others facing financial insecurity resulting from their low levels of education are more reluctant to make that leap, even when they would prefer to marry directly. 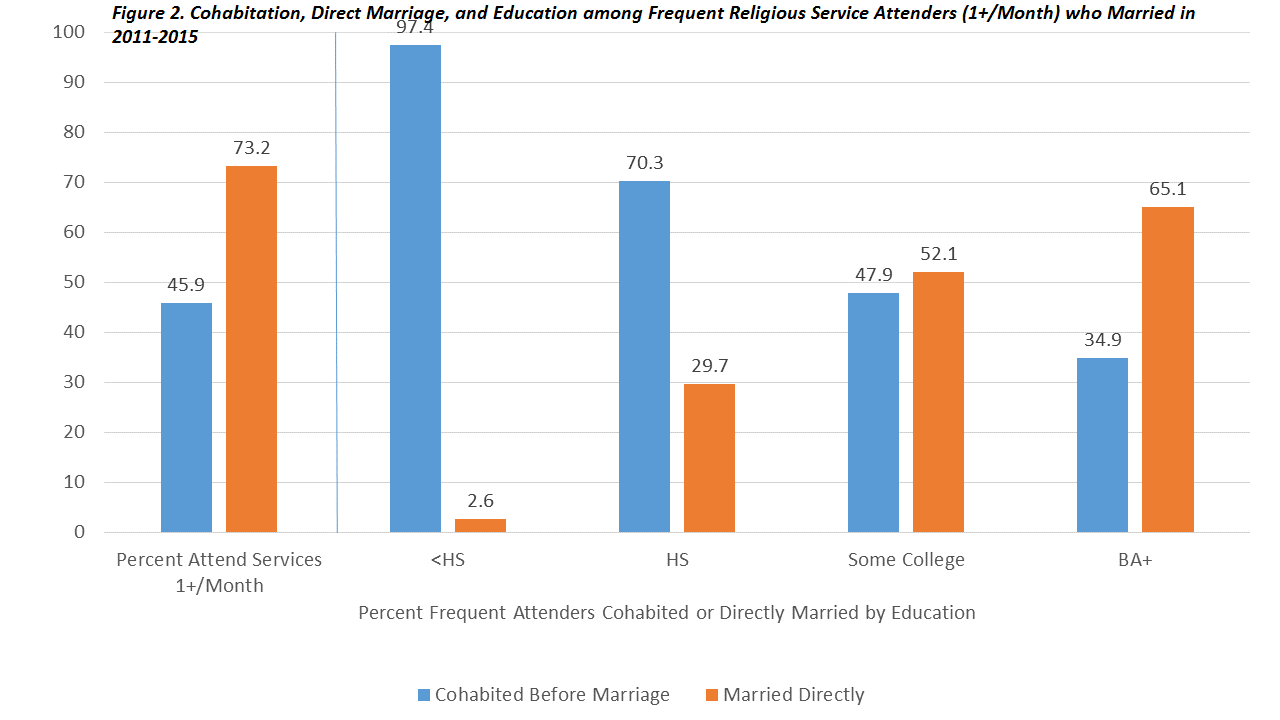 Note: Numbers calculated from the National Survey of Family Growth and based on women <36 at first marriage.  (N=553; Frequent Religious Service Attenders, N=315)

Even More Evidence that Resources Influence Romantic Decisions. In addition to being more likely to cohabit before marriage, recent research finds that working-class couples move in together earlier in their relationships than college-educated couples, often because of financial difficulties or housing needs. Among college-educated couples, financial difficulties seldom play a part in the decision to cohabit. Increasingly, then, the ability of couples to make decisions about cohabitation and marriage based on their values seems to depend upon their financial circumstances. And this can have consequences for relationship stability. As I show below (Figure 3), premarital cohabitation no longer predicts divorce, but moving in together rapidly does increase the possibility that a relationship will dissolve without moving on to marriage.

The Relationship of Cohabitation and Divorce Reversed over Time. In a new analysis prepared for this report and shown in Figure 3, I find that the relationship between premarital cohabitation and divorce has also changed over time. Not surprisingly, those who were willing to transgress strong social norms to cohabit from the 1950s to 1970 were also more likely to transgress similar social norms about divorce. Indeed, in that earlier period, people who lived together before marriage were 82 percent more likely to divorce than people who moved in together only after marriage. But as cohabitation became more widespread, its association with divorce faded. In fact, since 2000 premarital cohabitation has actually been associated with a lower rate of divorce, once factors such as religiosity, education, and age at co-residence are accounted for. 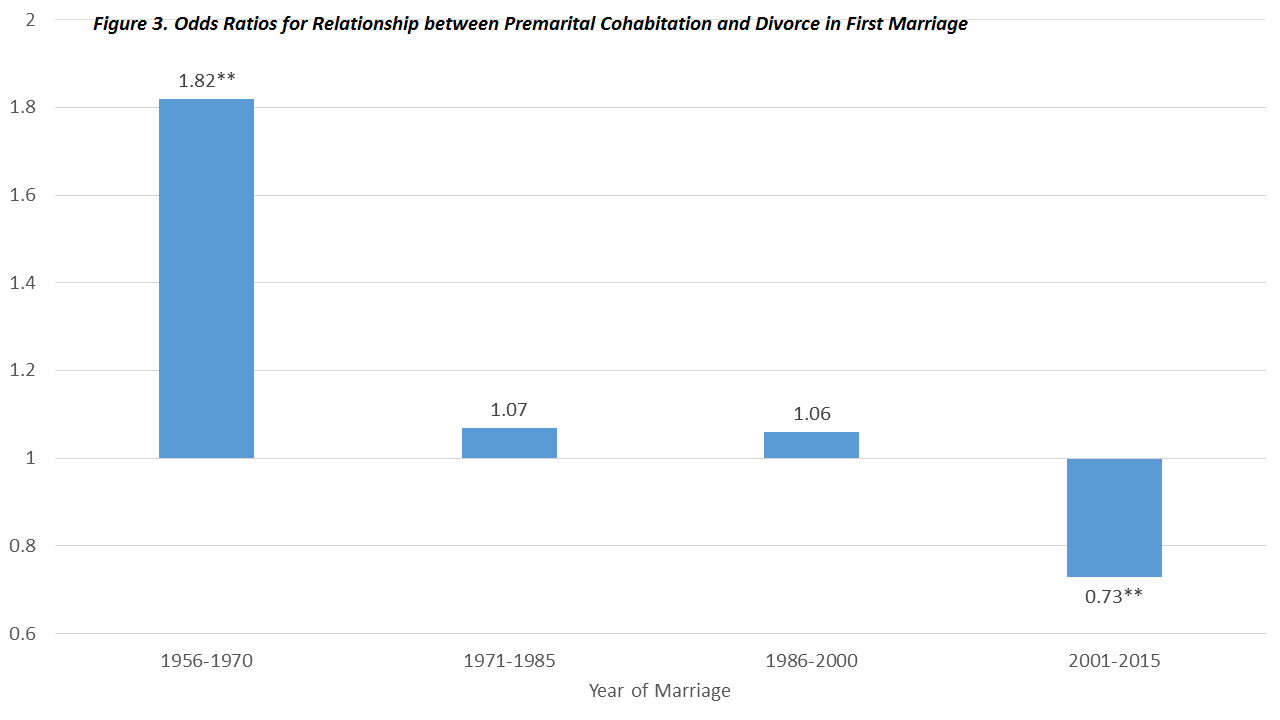 Note: Numbers calculated from the 1988 National Survey of Families and Households (1956-1985, N=3,594) and National Survey of Family Growth (1986-2015, N=9,420) using Cox regressions and based on women <36 at first marriage. Controls for age at coresidence, age at coresidence squared, raised not religious, religious attendance, race, education at marriage, mother’s education, prior cohabitations, lived with both biological parents at age 14, birth prior to coresidence, began coresidence while pregnant. **p<.01

But the likelihood of divorce, other research shows, also varies by education and economic stability. Regardless of whether people live together before marriage or not, college-educated couples have far lower rates of divorce than couples with a high school diploma or less. On average, women with a high school diploma or less have a 60 percent chance of a marriage ending in divorce within 20 years. The chance that a woman with a college degree will divorce within the same time period is nearly three times lower — about 22 percent.

Arielle Kuperberg is Associate Professor and Director of Undergraduate Studies in Sociology and Cross-Appointed Faculty in the Women and Gender Studies Program at the University of North Carolina at Greensboro. Follow her on twitter at @ATKuperberg and reach her at atkuperb@uncg.edu.

3Q Interview with Stephanie Coontz: American Intimacy in a Time of Escalating Inequality

Executive summary: Who Cohabits? Evidence about wealth and religion tells a changing story