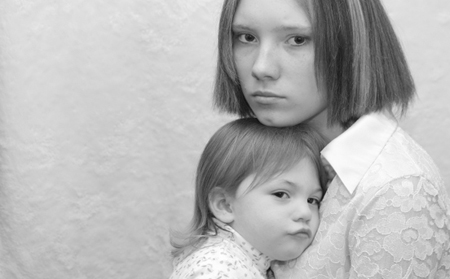 The Census Bureau has a new report on nonmarital births. Based on the American Community Survey—the largest survey of its kind, and the only one big enough to track all states—the report shows that 35.7 percent of births in 2011 were to unmarried mothers.

Beneath the headline number, two patterns in the data will receive a lot of attention: education and race/ethnicity. I have a brief comment on both patterns.

The education patterns show a very steep dropoff in nonmarital births as women’s education increases. From 57 percent unmarried among those who didn’t finish high school to just nine percent among those who have graduated college. 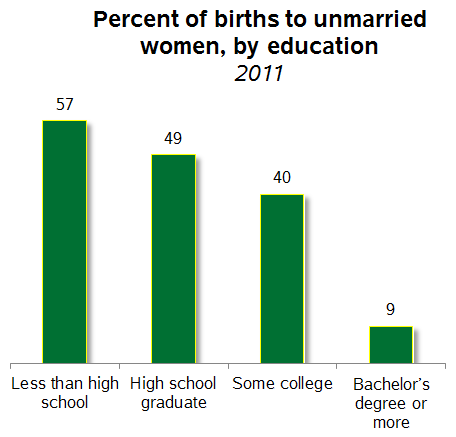 Given the hardships faced by single mothers (especially in the United States), it looks like women with more education are making the more rational decision to avoid childbearing when they’re not married. And I don’t doubt that’s partly the explanation. But we need to think about marriage, education and childbearing as linked events that unfold over time. The average high-school dropout mother was 26, while the average college-graduate mother was 33. Delaying childbearing and continuing education are decisions that are made together, based on the opportunities people have. And completing more education increases both the likelihood of marriage and the earning potential of one’s spouse.

So I think you could tell the story like this: Women with better educational opportunities delay childbearing, which increases their marriage prospects, and makes it more likely they will be married and financially better off when they have children in their 30s.

The differences in nonmarital birth rates between race/ethnic groups in the U.S. are shocking, from about two-thirds for black and American Indian women to 29 percent for whites and 11 percent for Asians. 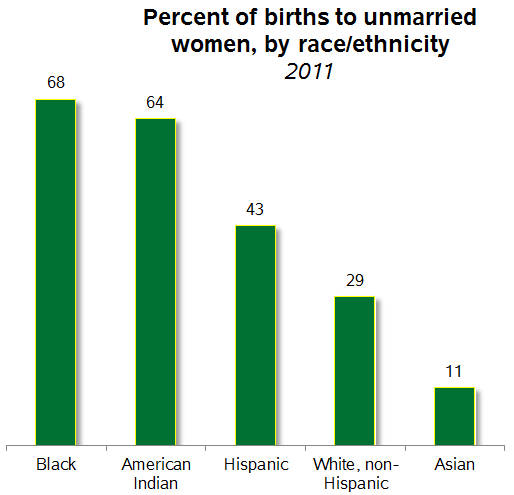 This pattern is related to the education trend, naturally, but that’s not the whole story. One aspect of the story is race/ethnic geography of opportunity in this country. I’ve written before about the shortage of employed men available for women to marry, a particular expression of racial disparity first popularized by sociologist William Julius Wilson a quarter century ago.

Using the new numbers on nonmarital birth rates for each state from the Census report, I compared them to the male non-employment rate—specifically, the percentage of unmarried men ages 22-50 that are not currently employed. Here’s the relationship:

The states with more single men out of work have higher rates of nonmarital births. Single mother, meet jobless man.

My conclusion from these patterns is that unmarried parenth 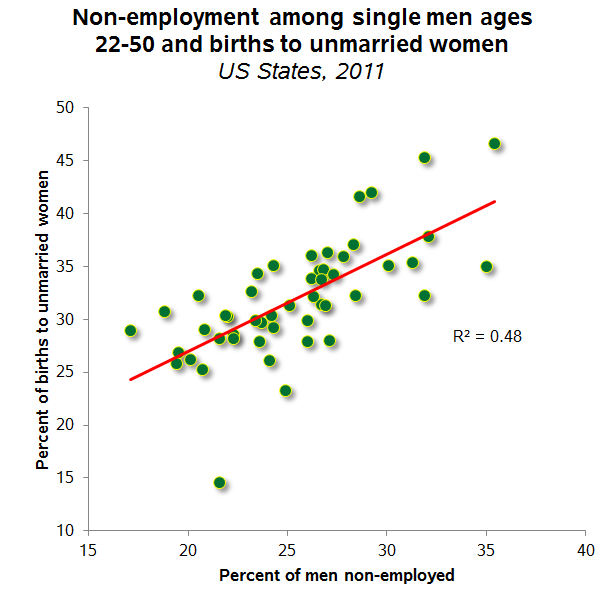 ood is primarily a symptom of lack of opportunity, especially for education and employment. Surely that’s not the whole story. Maybe we should be persuading people to marry younger or shaming them into avoiding parenthood. But I think those approaches increase stigma more than they change behavior or improve wellbeing—Pew surveys show that 77 percent of people already say raising a family is easier if you’re married and only 12 percent of single people say they don’t want to marry. So who needs convincing? Meanwhile, if we addressed the problems of education and employment, is there any doubt family security and stability would improve, and with it the wellbeing of children and their parents?