Stream Research:
The Functional Materials Stream focuses on the development of new functional materials. Students are involved in ongoing research in photoluminescent lanthanide coordination complexes. Recently, the research in these novel functional materials has attracted a great deal of interest because of their potential applications in photovoltaic devices (solar cells, which would relieve our emerging local, national, and global energy crisis), fluoroimmuno-assays, laser systems, bioprobes, and optical amplification. The students will learn how to design and synthesis luminescent metal complexes and study the relationship between the photophysical properties and their coordination structures determined by X-ray crystallography.

X-ray crystallography:  A powerful method used to determine the structure of crystalline solids. It is now used very broadly throughout the chemistry and biochemistry communities. In this stream, students are taught how to grow crystals and determine structure by single crystal X-ray diffraction. Students learn the basic principles of X-ray crystallography and use a new single-crystal X-ray diffractometer (Rigaku SCXMini) to collect data under close supervision.

What do we do?
Our FRI stream is focused on the synthesis and characterization of metal complexes which have the potential for useful technological applications such as probes in biological systems, light emitting diodes (LED’s) and photovoltaic devices (solar cells).

What knowledge and skills do you learn?
We teach you useful skills in areas such as chemical synthesis (how to make a new compound), and how to characterize compounds and materials – in other words we find out what we have made and what it can do. The two main techniques that we use for these studies are X-ray crystallography (tells us what the structure is) and UV/Vis/fluorescence spectroscopy (tells us about the light emitting properties of the compounds we make).

What do I get to show for my efforts?
You are quickly involved in cutting edge, state-of-the-art research which will be published in the primary, peer reviewed scientific literature. So far we have published ten papers, and more are in preparation. For example, one discovery is a massive (Texas sized!) cluster of 32 Tb ions contained in a single molecule. This compound was synthesized by two of our FRI students who were financially supported on summer fellowships. This work was published in 2013 in the Journal of the American Chemical Society (JACS), one of the top chemical journals in the world- with two FRI students as the leading authors. A picture of these compounds are shown below. 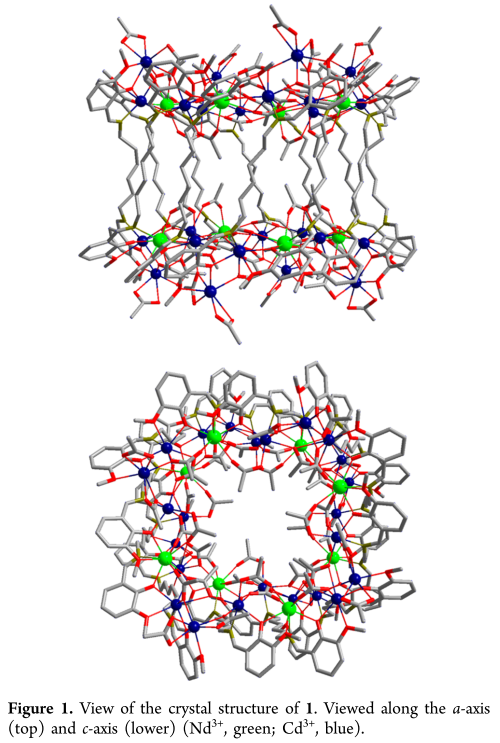 FRI began with three small streams in the chemistry department in 2006.  Over those initial years faculty submitted proposals to begin a stream in different departments.  We now have research branching across many disciplines in the College of Natural Sciences (chemistry, biology, biochemistry, physics, astronomy, computer science, and math).

In 2009 Dr. Richard Jones and Dr. Bradley Holliday began our stream to teach students about single crystal X-ray crystallography, growing crystals, making lanthanide coordination compounds and using a fluorometer to measure the emission intensities of luminescent compounds.  The Research Educator (RE) that began the stream, Dr. Xiaoping Yang, was a post doc for both Jones and Holliday.  Over the first couple years the stream acquired its own fluorometer instrument and new X-ray instruments that the chemistry department maintains.  In 2013 Dr. Yang moved to China to become a professor at Wenzhou University.

The next RE, Dr. Lauren DePue, began in the fall of 2013 with only 16 students but over the years the stream increased in popularity and the number of students more than doubled.  In 2016 Dr. Holliday left as one of the principal investigators for the stream and we are excited to welcome another co-PI, Dr. Emily Que.