You are here: Home / Our Impact / An Award-Winning Approach to Teaching About Human Trafficking 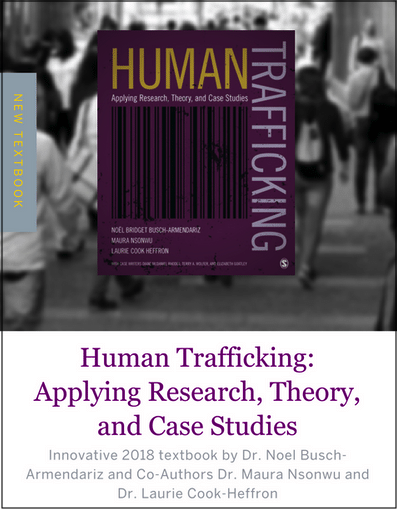 In 2019, Noël Busch-Armendariz won the Robert W. Hamilton Book Award, UT’s most prestigious literary prize, for “Human Trafficking: Applying Research, Theory, and Case Studies.” Her award marks two notable events: the first time that the award was given to an author of a textbook, and the first time, in at least 20 years, that it was presented to two winners. This article was originally published on August 13, 2020, by Adrienne Dawson, UT News.

After Noël Busch-Armendariz, director of UT’s Institute on Domestic Violence & Sexual Assault (IDVSA), was promoted to full professor, it was suggested that she write a book about domestic violence, but she dismissed the idea. Although she understood that writing a book is often the next step for many social scientists after achieving tenure, her focus remained firmly on her research. On top of that, she was still a licensed master social worker (LMSW), so a textbook wasn’t in the cards.

She recalls thinking to herself: “It doesn’t seem necessary. You could fill a library full of books about domestic violence. I would not be making a real contribution, because I don’t think we need another book on domestic violence. But I’ll keep teaching it since I love the subject.”

What she had, though, was direct experience working on Central Texas’ first known human trafficking case: three victims, all minors, smuggled across the border from Mexico. State officials called IDVSA to the table to help, but no one — not even Busch-Armendariz — had developed the necessary screening tools for these exploitation cases.

“I remember being stunned, and it’s pretty hard for me to be stunned,” she says, thinking back. “I consider myself among the veterans in the work on violent crime. The cases I take as an expert witness are among the most complicated. But I remember it feeling unbelievable, like a Hollywood movie — not something that happens in my backyard.”

After that, she says she had two more thoughts. The first was that she realized she was seeing a particularly dark side of human nature where people would exploit others — even children. The second was that she had to do something. “Those minutes of being stunned and overwhelmed by just how dark the human spirit could be were indulgent. One more moment of inaction was too long.”

A team of more than two dozen experts and specialists from Central Texas came together — national and local law enforcement, prosecutors, social workers, child advocates and refugee resettlement workers. They formed a cohesive task force and looked at existing laws and social services to see if they would be adequate to meet the needs of these survivors.

These three children, she says, were just the tip of the iceberg.

‘We’re Always at the Table’ 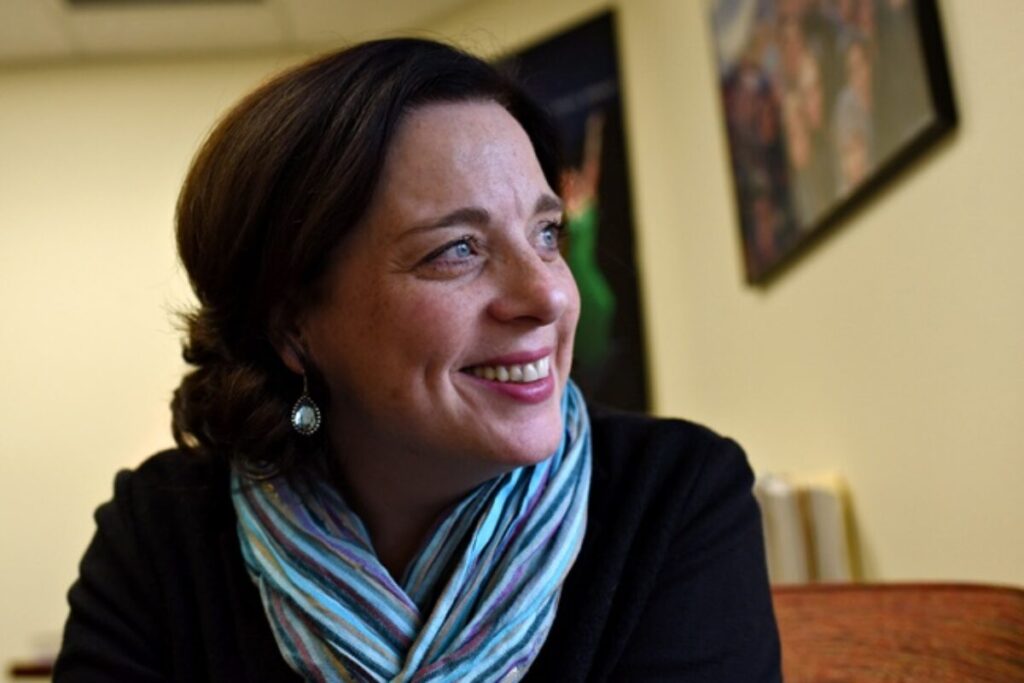 IDVSA, under Busch-Armendariz’s direction, focuses on translational research. That means the institute’s goal is outcome-based: How can knowledge be applied in new ways to produce tools and techniques that help people faster? “It’s ‘What’s the next pressing issue?’” she explains. “We translate that into a researchable question, and then we feed that back to community members, whether it be prosecutors or law enforcement or forensic investigators. We’re always at the table when these kinds of crises come up.”

The task force began to see that human trafficking was meeting both devious needs and everyday labor demands, a nefarious combination. Busch-Armendariz explains: “The devious needs are related to sex trafficking. Now, we as regular people going about our lives don’t routinely come into contact with this, but we are part of the supply chain of products produced with exploited labor. We’re the retailers and consumers, and we’re benefiting from those goods and services. That’s why we describe human trafficking as being hidden in plain sight.”

In Texas and across the country, the task force found that exploited labor — the linchpin in human trafficking — had been used to produce everything from coffee and chocolate to smartphone components, as well as to run cruise ships. Busch-Armendariz emphasizes that the use of coercion and fraud can’t be understated. “Human trafficking victims are underpaid and often intimidated into working for no money at all under false pretenses.” Victims may be told that if they comply, they’ll earn an education or the right to work in the U.S. legally. But later those promises don’t pan out, and they are threatened with violence or homelessness, or in some cases are physically and sexually assaulted.

All of this spurred Busch-Armendariz to develop courses for undergraduate students, but no textbooks on human trafficking existed. Exposés or first-person narratives were available, and they were compelling and hooked students, “but teaching with evidence is critical.”

“North Side Elementary just called with an immediate response case. You close?” “Right around the corner,” Connie answered. “Gimme ten to park and make a pit stop.” “The police will meet you there. … [The school’s] got two new students, and a lot of things don’t make sense.”

“What I really needed was a textbook that brought three elements together: the broad theory, the empirical research and the human interest. And it just didn’t exist,” she says. “I kept thinking, ‘Well, somebody’s going to write that.’ Then I thought, ‘Wait, maybe we’re the ones to write this textbook.’ All of a sudden it clicked.”

“We” are co-authors Maura Nsonwu, a social work professor (and Busch-Armendariz’s sister) from North Carolina State University, and Laurie Cook Heffron, a former UT doctoral student who’s now an assistant professor at St. Edward’s University. “None of us had written a textbook, but between us we had a half-century of teaching experience, so we knew a lot about pedagogy. And by now about eight years of research on human trafficking.”

According to school staff, a mom signed her two boys into school for the first time this morning and used the same birthdate for both boys, and when the school contacted her for clarification, the mom seemed confused. … [When] the boys were asked questions like where are you from, who’s your dad, where is he? … The boys weren’t giving consistent information.

What came from their collaboration is a book that’s multidisciplinary and multipurpose. Themes are told from the protagonist’s point of view — federal department of labor supervisor, a social worker, a professor, a police officer, a district attorney. The stories are gripping and fact-based, and they frame each chapter’s review of related academic theory, policy and intervention strategies.

The book is for students, yes, but also for anyone whose job places them in a position to investigate, prevent and prosecute human trafficking cases. It is also for those who provide care for its victims — including someone like Connie Blake, an investigator with the department of social services in Hall County, Georgia.* Her firsthand experience sets the scene for one of the chapters.

The narrative continues with Connie interviewing Jeremy and his 6-year-old brother, Lucas. It’s their first day at a new school, and the boys don’t know anyone. Their mother has filled out registration forms incorrectly, and it’s caught the school’s attention. When staff members call her to get the boys’ correct birthdates, she’s out of sorts and inconsistent.

The first thing Connie noticed was how cute [9-year-old Jeremy] was. Small for his age, he had large, dark eyes fringed with thick lashes. … When he sat down, he made sure there was something between him and Connie. He picked up one of the stuffed animals, a bear, and put it on his lap.

Eventually he started talking about his other school, then paused. “I’m not supposed to tell you.”

The little boys have been brought to the counselor’s office to meet Connie. She has to piece together their story and determine whether they need help. Lucas, open and guileless, willingly tells Connie there are several things he must keep secret: his name, his age and where he lives.

Connie learns that, as she was talking to Jeremy and Lucas, their mother was arrested. Connie’s job now is to see whether the brothers can show her where they live. She needs to collect clothes for them — they’ll be in the state’s care for the time being — but detectives will be following close behind, ready to search the home for clues.

The boys, crying, hold her hand as they walk with her to her car. As Connie drives, they direct her to a trailer on a secluded piece of property. She and the detectives knock and hear rustling inside. They enter to find a home in disarray, filled with trash. They also find Augustina.

The third bedroom floor was also covered with mattresses, and in the corner, there was a young woman. … [She] was tiny, swallowed up in huge men’s clothes, smiling up at them. … Connie guessed [she was] 13, but when asked, Augustina said she was 17. … She practically climbed into Connie’s lap. Leaning very close, the girl touched Connie’s hair and neck. Connie attempted to comfort the girl, but Augustina’s touching was invasive and inappropriate.

Connie eventually leads Augustina to her car to sit with Jeremy and Lucas. The brothers smile and hug her, patting her face. A detective says he has to take Augustina in for interrogation. “She’s 17,” he insists, “and we’ve got probable cause on prostitution.” Connie says they don’t. “She can’t count,” Connie retorts. “She doesn’t know her colors … and she’s not high. She’s a victim. She’s a child.”

First in the Nation

Connie Blake’s story is called a decision case, and it’s not the typical kind of descriptive case study found in most textbooks. Decision cases, the authors explain, are factual events that actual practitioners have encountered. When combined with critical theory and research, students can develop more sophisticated decision-making abilities — hence the name — by thinking across disciplines (neurobiology, geopolitics, psychology, policy) and perspectives (investigator, victim, trafficker, teacher).

At least, that’s the goal. And given that Texas reportedly ranks first in the nation for active human trafficking cases, it’s an important one.

“People often ask me about the emotional costs of my work, given that I work in violent interpersonal and intimate partner crime,” says Busch-Armendariz, who has delivered testimony as an expert more than 100 times in high-profile homicide and human trafficking cases. “Undoubtedly, bearing witness and understanding the capacity and capability of violence and abuse of human beings is profound.”

She says the human spirit, though, is impressive and resilient, and determined to survive.

“I put my focus there so that I can keep doing this work.”

*Names and locations have been changed to protect victims’ and case reporters’ identities. Other details are presented as told to the authors.