One in five women and a smaller number of male students are sexually assaulted in college, and only 5% of those assaults are reported to law enforcement (Krebs, Lindquist, Warner, Fisher, & Martin, 2007; Fisher, Cullen, Turner, & 2000). In 2014, to address campus sexual assault, the White House Task Force to Protect Students from Sexual Assault called upon campus communities to prevent victimization, respond more effectively to survivors, provide training to school officials, and improve administrative policy (Not Alone Report, April 2014).

The School of Social Work at UT Austin was one of four schools named in the Not Alone Report to conduct research on campus sexual assault issues. As a result, IDVSA partnered with the UT System Office of Director of Police to develop the Blueprint for Campus Police: Responding to Sexual Assault, an empirically-based guidance for campus police to address campus sexual assault in victim-centered ways.

The Blueprint is a multi-level approach to the complex problem of campus sexual assault (CSA) that builds upon the existing body of knowledge and recognizes the need for identifying emerging best practices.

The guidance developed for campus police is empirically driven through in-depth interviews, field observations, and a thorough review of the policies and practices pertaining to CSA. This resource is intended to serve as a guide or toolkit for police at all levels (chief executives, investigation, and patrol) in response to sexual assault crimes with the implementation of victim-centered and trauma-informed approaches. In this way, the Blueprint replaces “tradition with science.”

This project was funded by the Texas Office of the Governor, Criminal Justice Division (Contract No.UTA14-001266). The opinions, findings, and conclusions expressed in this publication are those of the authors and do not necessarily reflect the official position or policies of the Texas Office of the Governor. The Texas Association Against Sexual Assault held the prime award. 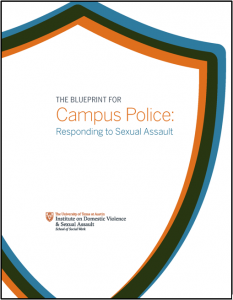