Project ReVEAL aims to understand the use of handheld video cameras in collecting evidence in domestic violence cases. In 2017, several law enforcement jurisdictions in  Texas were given handheld video cameras to aid in the collection of evidence when called to the scene of an incident. IDVSA examined the efficacy and use of these cameras in collecting statements and video evidence that is later used in the prosecution of these cases, with the ultimate goal of improving case outcomes. 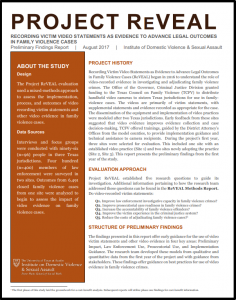