With funding from the Texas Office of the Governor, IDVSA has worked to broaden the understanding of sexual assault cases in Texas that moved forward for prosecution—and of those that did not.

Most reported cases of sexual assault do not move forward for prosecution, yet little is known about reasons for such case attrition including prosecutorial discretion and decision-making. Sexual assault case attrition has been studied by other states through an in-depth examination of case files and administrative data but is often limited to law enforcement action or inaction on the cases. This project was born out of the long-standing imperative to understand what occurs with sexual assault cases in the criminal justice system, including in the investigation and prosecution process.

For this assessment, IDVSA conducted a secondary analysis of state and county-level administrative data examining sexual assault case flow and attrition. The Snapshot project’s overarching aims were to:

The Snapshot project adds depth to the extant literature on sexual assault case flow and attrition by examining case characteristics prevalent in cases that end with a guilty plea or conviction compared to those that do not. It also provides usable tools for criminal justice stakeholders to track and monitor their case flow processes—and better understand key aspects and decision points in the system.

The following four tools highlight key findings based on the various statewide data sets identified in this project. 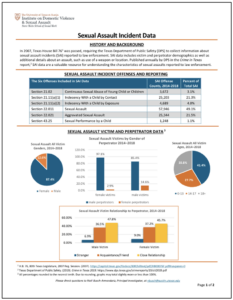 Sexual Assault Incident Data in Texas: This brief provides synthesized information on sexual assault incident data collected by the Texas Department of Public Safety (2014–2018) and reported to law enforcement, including the type of assault; victim and perpetrator demographics and relationship; and use of substances or a weapon during the assault. Key findings include that alcohol was involved in approximately 10% of reported assaults and drugs involved in approximately 5% of reported assaults. 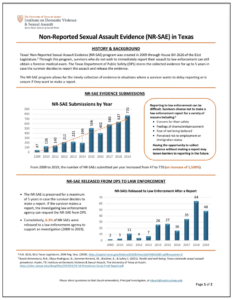 Non-Reported Sexual Assault Evidence in Texas: This brief offers a summary and analysis of data from the Non-Reported Sexual Assault Evidence (NR-SAE) program in Texas created in 2009 in which survivors who do not wish to make an immediate report to law enforcement can still obtain a forensic medical exam and have the evidence stored for up to 5 years. The number of NR-SAEs submitted annually increased from 47 to 770 from 2009 to 2019. Key findings include reasons why survivors do not choose to report, how many survivors later made a report using NR-SAE evidence, and NR-SAE submissions by geographic region. 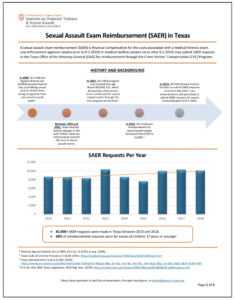 Sexual Assault Exam Reimbursement in Texas: This brief gives an overview of sexual assault exam reimbursement, which is financial compensation for a medical forensic exam from the Crime Victim’s Compensation program for law enforcement agencies or medical facilities. It provides history and background, figures on the number of reimbursement requests annually (2010–2018), average and total payments, and information on the sexual assault evidence tracking program Track-Kit. 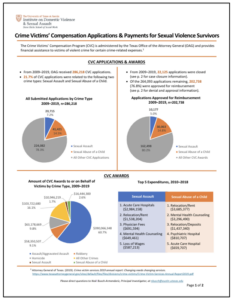 Crime Victims’ Compensation Applications & Payments for Sexual Violence Survivors: This brief details the Crime Victims’ Compensation (CVC) program in Texas (2009–2019) as it relates to sexual assault crimes. The data include applications and awards for sexual assault and other crimes, awards by crime type, top CVC expenditures, and decision points in determining CVC eligibility. It also includes a summary and relevant data on CVC case closures or denials, and the key findings that sexual assault cases have comparatively high CVC closure and denial rates versus CVC applications for other crimes.