You are here: Home / Who We Are / Leadership & Staff / Stepha Dragoon 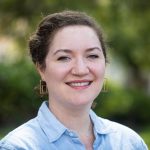 Stepha is a graduate student pursuing dual degrees in Master of Science in Social Work and Master of Public Affairs at the University of Texas at Austin. At IDVSA, she works primarily on the Cultivating Learning and Safe Environments (CLASE) project, which focuses on issues of sexual harassment, dating violence, stalking, and sexual assault at UT System institutions of higher education. Before coming to UT Austin, Stepha ran community programming at the Lower Ninth Ward Living Museum in New Orleans, LA., a nonprofit museum and community space that she co-founded in 2013. Stepha’s professional interests include the intersection of community-building and policymaking, social determinants of health interventions, and trauma-informed policies and program development. Stepha received her Bachelor of Arts degree in Critical Theory and Social Justice with a focus in Critical Race Theory from Occidental College in 2013. In her free time, Stepha enjoys exploring Austin’s green spaces, cooking new vegetarian recipes and hanging out with her cat, Chickpea.