You are here: Home / Who We Are / Leadership & Staff / Yulanda McCarty-Harris 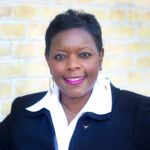 Yulanda L. McCarty-Harris, J.D., is the Director of Mission Critical Initiatives at the Steve Hicks School of Social Work’s Institute on Domestic Violence & Sexual Assault (IDVSA). She is an accomplished and dedicated senior leader and attorney who has 20 years of experience in the public/private sectors, including 13 years in higher education. She has successfully led compliance efforts, including the prevention of sexual harassment and all forms of discrimination. She has also developed and implemented comprehensive, collaborative, and data-driven affirmative action plans.

Prior to coming to UT, she spent 18 years in Ohio. There, she served as the Director for the Office for Institutional Equity at Cleveland State University and was also the university’s Title IX Coordinator. She was the Director of Equal Opportunity and Diversity at Youngstown State University and was a director and senior employment lawyer for the City of Toledo. She is an affiliate practitioner for the nationally acclaimed program, Courageous Conversations about Race, an award-winning protocol for effectively engaging, sustaining, and deepening interracial dialogue. She also has a Diversity and Inclusion for HR Certification from Cornell University.

McCarty-Harris is currently a doctoral student in UT’s Higher Education Leadership Program (expected to graduate in December 2021). She is a licensed attorney in Texas and Ohio and received her undergraduate degree from UT Austin and her juris doctorate from Southern Methodist University School of Law in Dallas.  She also serves as the First Vice President for the American Association for Access, Equity and Diversity (AMAED), the oldest operating association of professionals in the equal opportunity/affirmative action profession. She was selected as the inaugural recipient of the Shield-Ayres Advancing Social Justice Doctoral Research Fellow.