We enjoyed an extended spring in Austin this year, with abundant rains and cool temperatures that have brought a vibrant season of Texas wildflowers and balmy outdoor time before the beginning of our long hot season.

As usual, our academic year was hectic and productive. During the week of graduation, we proudly saw our student Anthony Dest earn his doctoral hood, and celebrated others earning dual master’s, master’s, and bachelor’s degrees. Our continuing MA and PhD students performed exceptionally well in 2018–19, as evinced by LLILAS students winning the “triple crown” of prestigious academic fellowships: the internationally competitive Social Science Research Council (SSRC) grant, awarded to PhD candidate Fátima Valdivia, an author in this issue; and two of the university’s most competitive graduate fellowships—the continuing and the “thematic” scholarships, the former won by Ana Braconnier and Adriana Linares, and the latter by Rony Castillo.

Our undergraduate program continues to grow and thrive; once again, a LLILAS Benson senior, Eva Howard, has been named as Dean’s Distinguished Graduate, a rare honor that makes us enormously proud. All of this points to the fact that our program, which combines rigorous scholarship with social engagement, has a positive impact on our students, our university, and on communities beyond our campus.

One of our proudest institutional accomplishments this year is that LLILAS Benson has successfully, at long last, been able to match the initial $10 million gift that Joe R. and Teresa Lozano Long gave in support of Latin American Studies at The University of Texas at Austin in 2000. Longtime readers will remember that it was this gift that precipitated the institute’s name change from ILAS to LLILAS. It was the Longs’ gift, along with the synergies that came about from the 2011 merger between LLILAS and the Nettie Lee Benson Latin American Collection, that helped make LLILAS Benson the internationally recognized organization it is today. Our boast that “We are the best Latin American Studies program in the nation and the best Latin American library in the world” is not just Texas hyperbole—it’s simply the truth! And it is thanks to the support of all our affiliates, institutional and research partners, students, visiting scholars, alumni, donors, and our many LLILAS Benson friends and allies that we continue to better our best.

Despite these many points of light, we have not lost sight of our raison d’être, Latin America. The crisis in Venezuela, the hard turn to right-wing populism in Brazil and to left-wing populism in Mexico, and, above all, the tragic situation of Central American migrants on our southern border, all draw our work, our eyes, and our hearts southward. But as Latin America faces challenges, it makes the work of LLILAS Benson all the more legible and important. Whether it’s holding a community foro urgente about Brazil’s new political climate, hosting a public lecture featuring former heads of state Sergio Ramírez (Nicaragua) and Luis Guillermo Solís (Costa Rica), or sending students to translate for Maya-language speakers in ICE detention centers, we continue to seek out new ways that LLILAS Benson can be both visible and impactful in the world beyond the university. 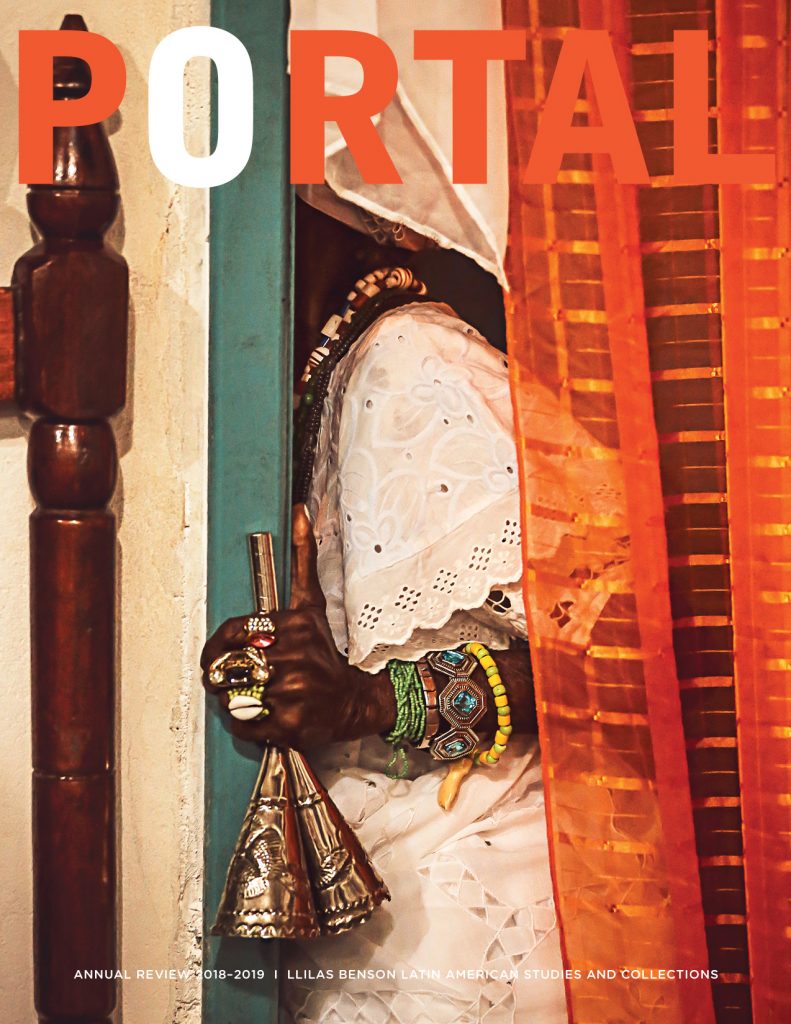 In this issue, we proudly showcase the research of Latin Americanist scholars in our program and at UT Austin, along with the work of two recent visiting scholars. Their topics span a range of themes and historical periods. Alan Covey reexamines the Inca Atahuallpa’s sixteenth-century encounter with Pizarro at Cajamarca, Peru. Fátima Valdivia writes of her ongoing research about the effects of drug trafficking on indigenous self-determination in Tarahumara, Mexico. Just as Valdivia points to the ecological disruptions of drug trafficking in the Mexican region she studies, Tinker Visiting Professor Beatriz Bustos writes about another disruptive and problematic industry, albeit a government-funded one associated with modernization: Chilean salmon. Art historian Gabriela Siracusano, the Tinker visitor this spring, shares a fascinating look at the material study of colonial and contemporary South American artworks in an interview with Portal editor Susanna Sharpe. Articles by Alvaro Céspedes on Mexican deportees from the US rebuilding their lives in Mexico City, Joshua Reason on reconceptualizing trans-centered research in Bahia, Brazil, and Ricardo Castro on the role of journalists in preserving collective memory, exemplify the thematic and regional breadth of the Latin Americanist scholarship that we promote.

Archival work is on display in this issue as well. AJ Johnson, librarian for Caribbean Studies at the Benson Collection, gives us a peek at the recently acquired Caridad Blanco collection of Cuban comic books. This issue’s alumni feature is brought to us by Luis Zapata, whose encyclopedic knowledge of metal and rock music, and its Latinx and Native American contributors, is on full display.

Surely, this issue contains something for everyone. I trust you will enjoy it!