You are here: Home / HMP and Bond Graphs 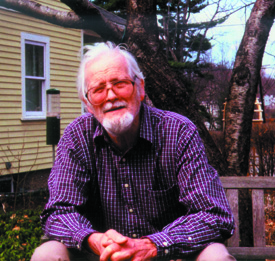 While I was a graduate student here at the University of Texas at Austin, Hank Paynter was a visiting professor for most of that time, having retired from MIT in 1985. I was fortunate enough to enroll in the roller coster of a ride he called  Modern Control the spring of 1986. Professor Paynter would walk into the classroom carrying an old ruffled brown paper bag full of colored chalk, the type we now associate with sidewalk art. I started using multi-colored pens to capture his lectures and was shocked when he said something about ‘Longo-reeah’ writing his homework in ‘technicolor’. He always pronounced my last name incorrectly, putting the accent on the “I”, insisting my pronunciation was wrong. Later after I started as an assistant  professor in Mechanical Engineering, I would begin a long distance relationship with Hank via phone, fax, and mail. There were many hours spent on the phone taking notes while Hank and I discussed ideas he had been gestating for years. I was once told by someone that Hank was taking advantage of me, and I’ll admit there were some wild goose chases. But I have never regretted these experiences. Hank knew I needed mentorship, and I was looking for that academic experience we all seek, learning from a larger than life persona. I will be eternally grateful for what Hank gave me over a decade of mentorship and friendship. The very least I can do is maintain this page for Professor Paynter.

Many of the materials found below were ‘harvested’ in 2002 from HMP’s personal website. We had a collaboration going, and he had me maintain a site here at UT-Austin, but he also had a website he created and maintained himself starting in the late 1990s.

Some notes and links have been added to provide context.  Dean Karnopp told me at a bond graph conference one time that he always felt that Paynter’s ADES book needed about 10 pages between every page to help the reader interpret what Paynter was trying to say on each page. I tend to agree. HMP would always talk about being “terse” in his writing. I also liked the expression he’d use when he told me to re-read anything I’d written: “Read it with a jaundiced eye!”

Professor Paynter provided me with the following short bio back in 1997 to put on my website. You can be sure he carefully edited this himself:

“Professor Henry M. (“Hank”) Paynter was born in Evanston, IL, in 1923 and received his S.B. (1944), S.M. (1949), and Sc.D (1951) degrees, all from the Massachusetts Institute of Technology. From 1944-1946 he worked for Puget Power in Seattle, returning to M.I.T. for graduate study and teaching. He taught hydraulics, hydrology, and hydropower subjects in the Civil Engineering Department from 1946 to 1954. His research, which addressed fluid dynamics and control and power system governing, led to the formation with G.A. Philbrick of the Pi-Square Engineering Company. This company was devoted to electronic analog computing, and his work Dr. Paynter collaborated closely with the Woodward Governor Company on hydro plant control.
In 1954, Dr. Paynter transferred to the Department of Mechanical Engineering at M.I.T. where he worked on a half-time basis until 1959, and then full time until his retirement in 1985. He is currently Professor of Mechanical Engineering Emeritus and Senior Lecturer at M.I.T. Sometime Sigma Xi National Lecturer and an ASME Distinguished Lecturer, he has also received the Alfred Noble Prize of the Joint Engineering Societies (1953), the ASME Oldenburger Medal (1979), and the ACC Education Award (1984). He is a Fellow of ASME, a Life Member of ASCE, and a Senior Member of IEEE. Professor Paynter has also recently been named to the National Academy of Engineering.

Besides pioneering work in analog and digital computing, Dr. Paynter is known worldwide as the inventor of bond graphs. He has published on a wide variety of subjects in more than 100 papers, patents, articles, and book chapters, as well as several books.”

Here are the images Paynter maintained himself on his personal website. Note the counter he had inserted into the html, showing 3333 hits at the time I captured his page. 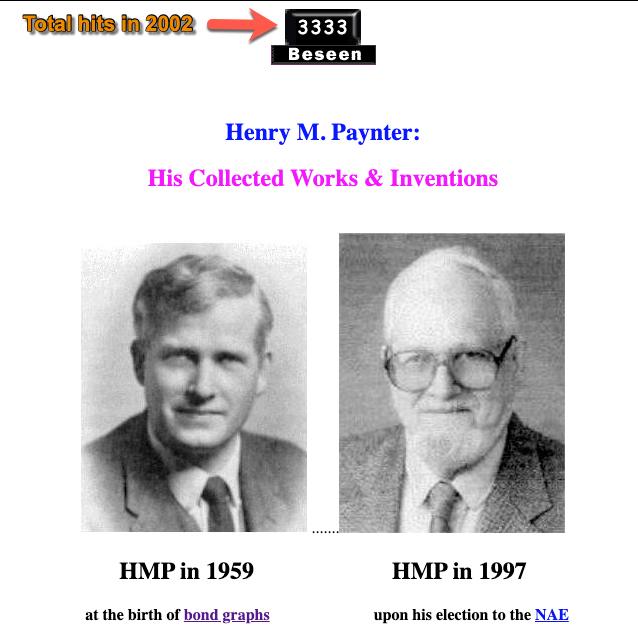 On a simple page he titled “Chemergetics”, Hank Paynter wrote the following in March 1999:

Just a year ago, a carton containing documents in transit to storage in my barn tipped over and spilled its contents upon the floor. Out fell a clipped-together long-lost manuscript packet last seen more than two decades ago. Containing seminal notions, this material had been assembled shortly before and just after the memorable visit to Case Institute in April, 1959. Because this catalytic MS source was unavailable at the time of writing the “Epistemic Prehistory”, I was forced then to rely upon fallible memory. But now this recent re-emergence permits a new and better view of the actual gestation and birth process. So we begin this revisionist account on the WWW with the three “Ditto” sheets prepared the morning of April 24, 1959 in the late Prof. Don Eckman’s office just moments before presenting my Seminar Lecture.

Below are the images that Paynter referred to as the three “Ditto” sheets:

Paynter refers above to the “Epistemic Prehistory”, which was an article he had written for a collection of papers called Bond Graphs for Engineers (edited by Peter Breedveld and Genevieve Dauphin-Tanguy, Elsevier Science Publishers, B.V., North-Holland, 1992). Here is “BGprehistory” as published, but which lacks these key ingredients Paynter was reminded of in 1999.

The Gestation and Birth of Bond Graphs

Stemming from his discovery of Chemergetics, Paytner set out to create his revised history of bond graphs.

Here is a The Gestation and Birth_of_Bond_Graphs written by Hank Paynter in 2000 (in html).

Paytner had a single html document on his website that he titled “Magister Ludi”. There were only two lines on that page:

I had never really heard of this story. Indeed, Hank spent a lot of time explaining many of the references he made to me. Here is a link: Glass Bead Game.

Obituary from 2002 (as written by Martha Paynter and Joseph Juarez)

Henry Martyn Paynter of Pittsford, Vermont, formerly of New York and Reading, Massachusetts, an Emeritus Professor of Mechanical Engineering, MIT, and inventor of the Bond Graph Modeling System died suddenly at his home on Friday, June 14. Dr. Paynter was born in Evanston, Illinois and grew up in New York City and its environs. He and his wife raised their six children in Reading, Massachusetts and upon his retirement, moved to Pittsford, Vermont.

Dr. Paynter received a B.S. (1944), M.S. (1949), and Sc.D (1951), all from MIT. He started teaching in the MIT Civil Engineering Department in 1946. Regarded as a creative, charismatic, and passionate teacher who deeply influenced the careers of his students, he urged them to think “big” and “deep” about engineering and science. To initiate the first Systems Engineering subjects at MIT, Dr. Paynter transferred in 1954 to the Department of Mechanical Engineering on a half-time basis until 1959 and then full-time until his retirement in 1985.

One of the world’s leading experts in analog computing, his close association with George Philbrick (credited along with Lovell as the developer of the operational amplifier) and his earliest research lead to the formation of the Pi-Square Engineering Company. This company applied fast electronic analog computing to industrial process control. Besides pioneering contributions to hybrid computing, today he is best known for his academic research and course work that culminated in the creation of Bond Graphing.

Dr. Paynter was a Sigma Xi National Lecturer, ASME Distinguished Lecturer, campus visitor, world traveler, and his honors included the Alfred Noble Prize of the Joint Engineering Societies (1953), the ASME Oldenburger Medal (1979), and the ACC Education Award (1984). A member of the National Academy of Engineering, he was also a Life Fellow of ASME, a Life Member of ASCE, and a Life Senior Member of IEEE. Until his time of death, Dr. Paynter was a prolific publisher of his works and collaborated widely with colleagues. In addition, he enthusiastically pursued local causes including environmental, forestry, and land preservation.

At the time this obituary was written in 2002, Paynter was survived by his wife, Gayllis A. (Beasley); a sister, Jane Solit of Deposit, New York; a daughter, Emily of Durham, North Carolina; a son Bruce W. of Newark, New Jersey; a son Kenneth D. of Israel; a daughter Martha of Natick, Massachusetts; and a son Neil F. of Hancock, Michigan.; 13 grandchildren and one great-grand child.

A memorial service was held Saturday, June 22 in Pittsford, Vermont.

Joseph Juarez met Professor Paynter when he attended graduate school at MIT, and they were friends ever since. Joe and I never met while Hank was alive. That changed after we heard about Hank’s passing in June of 2002. Joe and I planned a trip to Pittsford, Vermont to attend the memorial service organized by Hank’s family on June 22, 2002. We each flew into Albany, NY, then rented a car and drove to Pittsford. Interestingly, Joe and I were mistaken as brothers a couple of times, and we still laugh about that to this day (here’s my friend Joe).

We met Gayllis at Hank’s home on Adams Road. Walked through a house full of books, many sprawled through every hallway and room. We went into Hank’s study and stood by the fax machine that had been the source of so many of our communications. Gayllis allowed us to go into Hank’s famous barn, pictured in the photo we took below. It’s the one toward the back on the leftmost side. I remember Hank telling me a story about how Peter Breedveld had come to visit him in Vermont, and he made him work before he’d entertain any discussions about bond graphs. This is quite a place. 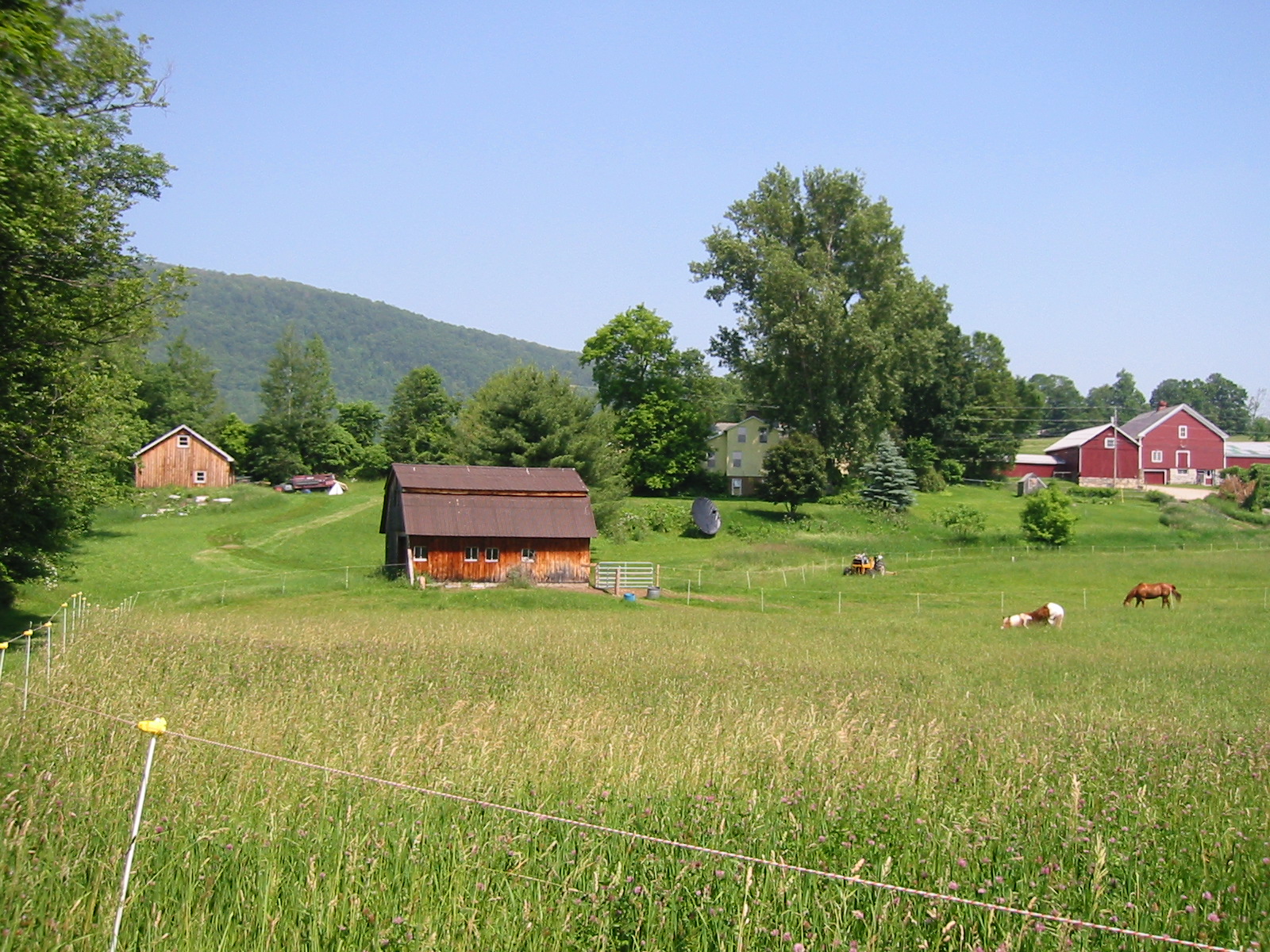