Graphene
Graphene is an atomically two-dimensional electron system made of a single layer of carbon atoms arranged on a honeycomb lattice. Interest in graphene has exploded in recent years because of the achievements of experimental research groups at the University of Manchester and Columbia University who have managed to isolate graphene layers and measure their electrical properties. At low-energies graphene is described by relativistic quantum mechanics with the role of spin played by the psedospin degree of freedom associated with the two atoms in the honeycomb lattice unit cell. Our theoretical research has concentrated on interaction effects in the quantum Hall effect of graphene, which have so far been mainly the appearance of SU(4) quantum Hall ferromagnetism, and on the differences between the Fermi liquid properties of graphene and an ordinary non-relativistic two-dimensional electron system in a quantum well. 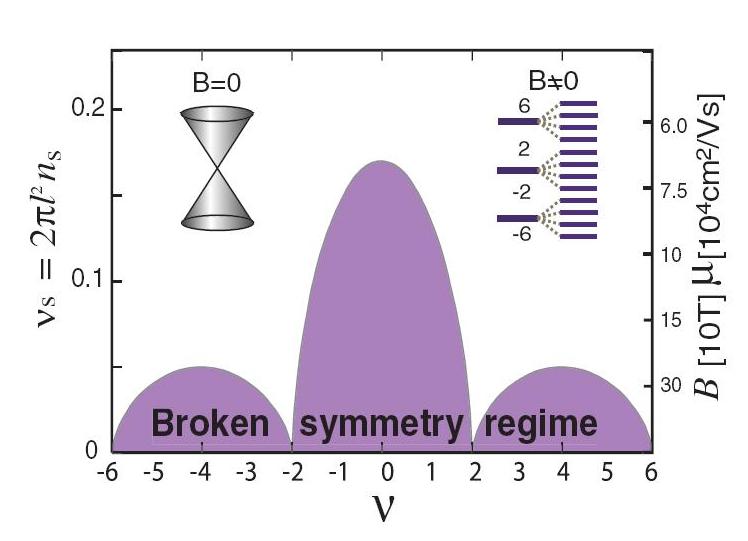 Metal Spintronics
Ferromagnetism in transition metals and transition metal compounds has been studied for decades and is the basis for much of a major applied physics subfield, magnetism and magnetic materials. These materials are nonetheless remarkable because the ordered state is remarkably robust, surviving well beyond room temperatures. Metal spintronics is the study of the interplay between magnetic and transport properties in these materials. The major topic in metal spintronics over recent years has been current-induced-torque phenomena, mainly spin-transfer phenomena, in which the magnetic order parameter can be manipulated by the altered exchange fields of a metal which carries current. Our research has focused on a microscopic picture of the effect which suggests that it is much more general than had previously been supposed. We have predicted current induced torques in antiferromagnetic metals, for example, which appear to have been seen in recent experiments.

Cold Atom Systems
Over the past several years an area of theory has built up at the intersection of condensed-matter and atomic physics. Atomic physicists have learned to cool clouds of atoms to extremely low temperature where they behave as quantum particles. By taking advantage of atomic physics phenomena like Feshbach resonances and optical potentials, it is possible to create systems of strongly interacting quantum atoms. In other words these atomic vapors act behave like condensed matter systems and not like gaseous vapors. These cold atoms systems can be used to address some of the most difficult problems in condensed matter physics from both experimental and theoretical points of view. Some of the problems that are being studied in our group include rapidly rotating bosons (the boson quantum Hall effect), fermionic atom systems near a Feshbach resonance, and quasi-one-dimensional atomic systems.

Quantum Hall Systems
The quantum Hall effect occurs in two-dimensional electron systems that are confined to a quantum well or a heterojunction in a semiconductor when the system is placed in a perpendicular magnetic field. The quantum Hall regime has been the source of a multitude of new phenomena in condensed matter physics for over twenty years. The quantum Hall regime is special because cyclotron orbit kinetic energy is quantized. All electrons must lie in macroscopically degenerate Landau levels. (Landau levels are sets of orbitals with the same kinetic energy.) Landau level degeneracy enhances the importance of both interactions and disorder and can lead to ground states with very novel properties, most notably perhaps to states with quasiparticles that have fractional charge and fractional statistics. Recent work in the group has focused either on excitonic superfluidity in quantum Hall systems or on the properties of the one-dimensional electron systems that exist at quantum Hall edges. 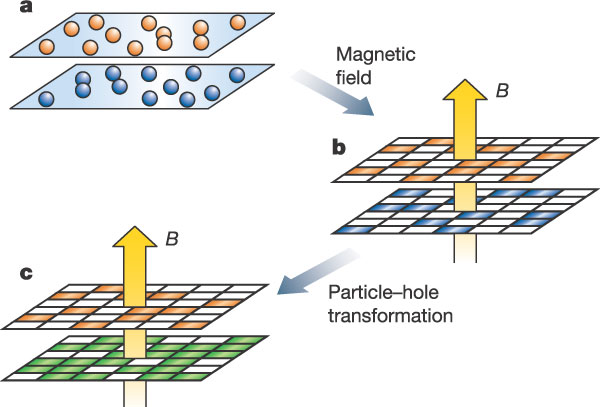 An electron-electron bilayer system in a strong magnetic field is equivalent to an electron-hole bilayer. Nature 432, 691 (2004).

Nanoparticles
Physicists and chemists have developed a wide variety of different techniques that can be used to create and study either individual or arrays of condensed matter particles that have an overall size that in the nanometer range, so-called nanoparticles. A typical nanoparticle contains from 100 to 10000 atoms. In some cases it has been possible to make electrical contact to an individual nanoparticle. In our group we have been interested in what happens to bulk ferromagnetism in the nanoparticle limit, and in transport through arrays of either paramagnetic or ferromagnetic particles. 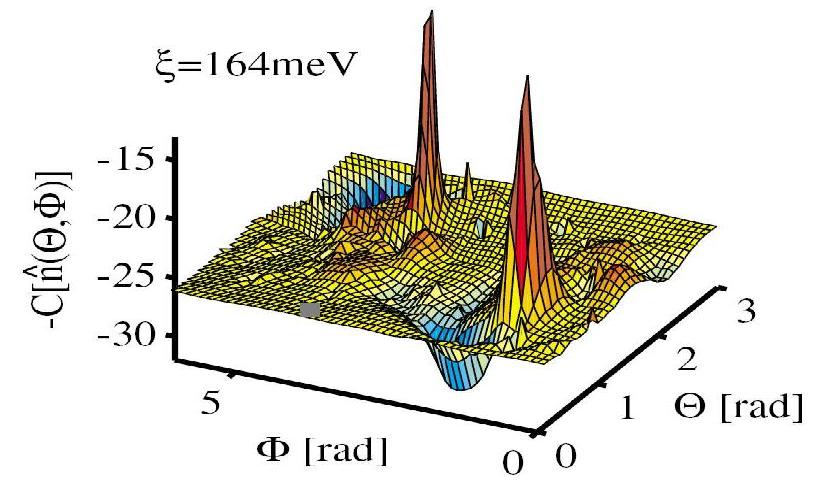