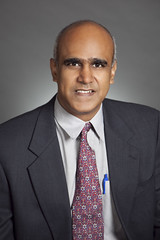 Computational modeling and simulation studies of novel Micro-Cavity Discharge (MCD) Thruster devices for small satellite propulsion are being performed.  MCD thrusters are a class of electrothermal propulsion devices for small satellites.  MCD thrusters are driven by low radio-frequency micron-scale dielectric barrier discharges in a flow-through (plasmatron) configuration.  Through computational modeling and simulations we have shown that highly controllable gas heating is possible in such devices and is the basis for the electrothermal thruster.

We are performing simulation studies of radio-frequency capacitivelty coupled plasma discharges used in the fabrication of thin films by atomic layer deposition.  Simulation results are being validated by experimental results by our collaborators Prof. Wolden at the Colorado School of Mines (http://inside.mines.edu/fs_home/cwolden/wolden2.htm).  The goal of this collaborative project is to develop a fundamental understanding of the process through a combination of extensive diagnostics and state of the art computational modeling.

A computational simulation study of direct-current plasma discharge phenomena in small length-scale geometries (<10 µm) is described.  The primary goal is to study discharge breakdown characteristics in small length scale geometries as quantified by a modified Paschen breakdown curve and the quench characteristics in these discharges.  A self-consistent non-equilibrium plasma model is used for the simulation studies.  The model includes field emission effects which is a key process in determining small length-scale breakdown behavior.  The breakdown curves obtained from the experiment and simulation showed excellent agreement providing a measure of validation for the model.  Quantification of the heat fluxes from the simulations show higher erosion at cathode, and a highly nonlinear heating behavior with applied over-voltages above the breakdown threshold.

This research is part of a large program involving several researchers at the University of Texas at Austin and Stanford University for a study titled  “Experimental/Computational Studies of Combined Cycle Propulsion: Physics and Transient Phenomena in Inlets and Scramjet Combustors” .  Here at the Plasma Research Laboratory we will investigate new high-bandwidth plasma actuators for control of high-speed (supersonic/hypersonic) flows.

The studies are both experimental and computational.  The experimental component involves the development of actuators which will be demonstrated in a scramjet inlet simulator at the Mach 3 and Mach 5 wind tunnels at UT.  The computational part will simulate plasma actuation phenomena and coupling of these phenomena with high-speed flow dynamics.

Our group performed one of the earliest computational simulation studies of atmospheric pressures glow discharges.  Specifically, we were the first to study the radio-frequency small gap plasma discharges in nobel gases.  Our studies clearly indicated the important role of even trace impurities in these discharges.  Subsequently studies were conducted for dielectric barrier discharges (DBD) which shed light in the origin of multiple pulsed in these discharges.  We have shown experimentally the nature of long time-scale drift phenomena in DBDs.