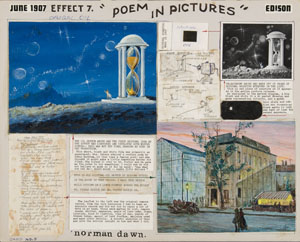 Special effects in film are most often associated with monsters and space aliens, explosions and gunfire. While such features certainly fit into that category, more often than not special effects are used to make something look real and normal that would otherwise be too difficult or expensive to photograph. Fair weather, for example, can be unpredictable; exotic or imaginary locations may be inaccessible or may not exist at all. But both can be realized through the use of matte paintings, glass shots, or other special effects techniques.

Many of the techniques were devised in cinema’s earliest years by Norman O. Dawn (1886–1975) and subsequently refined and improved by succeeding special effects artists. Recently, digital technologies have enabled new ways to create the “trick shot.”

Dawn was a relatively obscure yet historically significant early special effects cinematographer, inventor, artist, and motion picture director, writer, and producer. He worked with many important film pioneers including Mack Sennett, Carl Laemmle, Irving Thalberg, and Erich von Stroheim. The Dawn collection consists of 164 display cards that illustrate over 230 of the 861 special effects Dawn created in more than 80 movies.

Constructed personally from his own field notebooks and methodical records, the cards contain original oil, watercolor, pencil, and ink sketches used to sell the effects to skeptical film executives and directors; production and personal photographs; detailed camera records; film clips and frame enlargements; movie reviews, advertisements, and other trade press clippings; explanatory texts and recent sketches to illustrate his methods; and pages from an unpublished autobiography.

Each display card documents one of his special effects, most often a refinement or improvement of a matte shot process. This card illustrates a very early special effect Dawn created with Edwin S. Porter, one of the top directors in Thomas Edison’s motion picture company. Dawn’s notes about Porter, Mrs. Edison, and his sketch of Edison’s Bronx studio are also of interest.

This is just one item from the “Special Effects” section of the Making Movies exhibition, which opens February 9 at the Ransom Center.

For Central Texas readers, join us on the red carpet for a special opening celebration for the Making Movies exhibition on Friday, February 12.