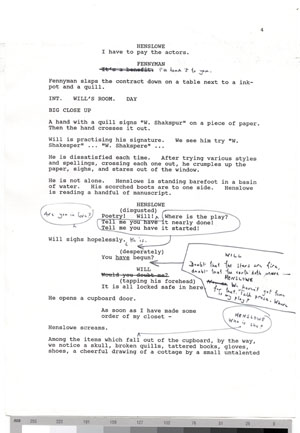 The screenplay expresses character and narrative and is therefore the focus of interpretation by the director, actors, and designers. Furthermore, the screenplay is the foundation on which all the other artists and technicians base their work. Whether a scene takes place indoors or outdoors, for example, may affect the sets the art director designs and builds and the clothes the costume designer creates for the characters to wear. A scene set at night will have implications for the cinematographer and might be played differently by the actor than a scene set during daylight hours. Special effects, exotic locations, and action scenes will also have implications for the budget, the shooting schedule, and for everyone on the production team. All these elements must be spelled out in the screenplay in order to budget, plan, and successfully incorporate them into the film.

In this early draft of Marc Norman and Tom Stoppard’s screenplay for Shakespeare in Love (1998), handwritten notes and edits by Stoppard are visible. Scripts from 16 films are featured in the exhibition.

This is just one item from the “Writer” section of the Making Movies exhibition, which runs through August 1 at the Ransom Center.

For Central Texas readers, join us February 12 on the red carpet for a special opening celebration for the Making Movies exhibition. Details at www.hrc.utexas.edu/redcarpet.