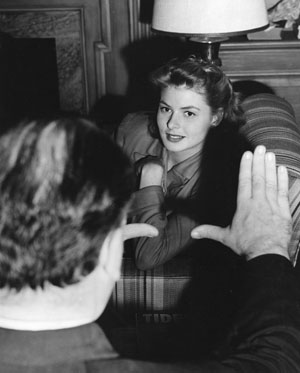 The art of cinematography goes far beyond the simple recording of a scene or event. It is a creative and interpretive process that involves many skills and techniques, some that are shared with still photography and some that are unique to motion pictures.

The cinematographer can manipulate the image through the selection of film stock, by moving the camera, or, in the case of digital cameras, through the adjustment of color sensitivity, light sensitivity, and image contrast. Color filters can be used for dramatic effects, and lenses can be chosen for their control of perspective and spacial relations. A cinematographer may film a subject in sharp focus but leave the background blurry (“rack focus”), or he might keep the entire scene in focus (“deep focus”), as the innovative cinematographer Gregg Toland did in Citizen Kane (1941).

Among the myriad options available to the cinematographer, the most important and constant element is lighting. The art of lighting has a significant impact on the emotional response of the viewer. The most beautiful sets and most talented actors will have no impact unless they are lit and photographed effectively.

A close-up connects with the viewer in a very different way than an establishing shot of a setting or a full shot of a group of people. A close-up is meant to focus the viewer’s attention. And in the case of a glamorous close-up of the lead actor it is meant to establish an emotional connection between the viewer and that actor. In this memo, producer David O. Selznick carries the idea further, into the financial returns a good close-up can provide—specifically good close-ups of actress Ingrid Bergman.

“As I have said so often, I think the success of ‘Intermezzo’ is to an unusual extent dependent upon how beautifully we can photograph Miss Bergman,” Selznick writes. “Every beautiful shot of her is a great deal of money added to the returns on the picture and I urge Mr. Kern and Mr. Ratoff [to] start to work on a list of where re-take close-ups might be made.”

This is just one item from the “Cinemetographer” section of the Making Movies exhibition, which opens February 9 at the Ransom Center.

For Central Texas readers, join us on the red carpet for a special opening celebration for the Making Movies exhibition on Friday, February 12. Details at www.hrc.utexas.edu/redcarpet.