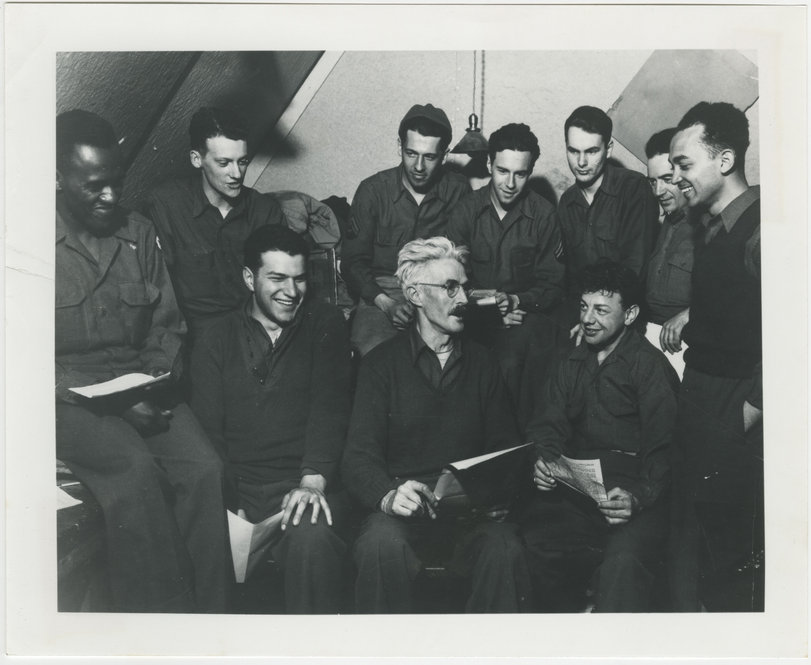 A few weeks ago, the Ransom Center received as a gift an unusual volume to add to our holdings of hard-boiled detective writer Dashiell Hammett (1894–1961). Kevin Berger, a journalist from New York, donated this booklet, which Hammett wrote for the U.S. military while he was stationed in the Aleutian Islands off the Alaska Peninsula during World War II. Berger’s father was a draftsman who also served in the Aleutians, and Berger had found the volume among his father’s drawings. We enthusiastically accepted the gift knowing that it would remedy what we call a “want”—a gap in our holdings. The Ransom Center is an important research site for scholars of Hammett in part because we have a small collection of Hammett’s papers and the massive archive of his longtime lover, the playwright Lillian Hellman. This gift is a boon to Hammett scholars not just because it fills a bibliographical gap, but because the Hammett papers, it turns out, contain a series of letters Hammett wrote to Hellman while stationed in the Aleutians.

In June 1942, the Japanese attacked a United States military base in Dutch Harbor on Unalaska Island and went on to occupy two far western islands in the Aleutian chain. After more than a year of air, sea, and land battles fought in brutal conditions, the United States defeated the Japanese in July 1943. Hammett was posted to the island of Adak almost immediately after the crisis ended. From that time on, the island was under little threat of invasion, and Hammett was assigned to keep the 50,000 troops stationed in the islands informed of current affairs through an official newspaper, The Adakian—a sleepy journalistic assignment, since news arrived in this remote outpost well out of date. As part of his work, Hammett composed the history The Battle of the Aleutians in September 1943, a project for which he and his collaborators received a commendation. Its narrative has the feel of hard-boiled suspense writing, as in this passage describing the U.S. preparing for a counter-attack:

And then trouble came, a williwaw, the sudden wild wind of the Aleutians. Nobody knows how hard the wind can blow along these islands where the Bering meets the Pacific….The first morning the wind stopped landing operations with only a portion of our force ashore and, by noon, had piled many of the landing boats on the beach. The men ashore had no tents, no shelters of any kind. They dug holes in the ground and crawled into them for protection against wind and rain and cold. When the wind had quieted enough to let the others come ashore, they too dug holes and lived like that while the cold, wet and backbreaking work of unloading ships by means of small boats went on. And they did what they had to do. They built an airfield. They built an airfield in twelve days.

The famous writer was admired by his young staff at the newspaper and was himself an appealing curiosity for an isolated community often suffering from low morale. In letters to Lillian Hellman, he wrote detailed descriptions of life in the Aleutians; in the example shown here, he covers subjects such as his living conditions, his Texan bunkmate, Fred Astaire, and his thoughts on another work of war writing by Ralph Ingersoll. Biographer Diane Johnson (whose research materials on Hammett are part of her archive at the Ransom Center) writes that “if there were a happiest year for Hammett, it might have been this one, 1944.” Despite the austere landscape and the lack of news—not to mention fresh food—he stopped drinking and found himself to be unusually content. Hammett remained stationed in Adak—interrupted by a brief, unhappy period at Fort Richardson on the mainland—until the summer of 1945.

Hammett’s decision to enlist had seemed strange to those close to him—he was almost 50, he had long suffered from tuberculosis, and he had a well-known distaste for mainstream American politics. But his hatred of fascism was stronger, and he performed the service he was assigned with vigor, as this little booklet shows. As Diane Johnson tells it, a confusion over Hammett’s given name may be the only reason he made it to the Aleutians in the first place: over the course of several months in 1943, the office of J. Edgar Hoover issued memos to the General Staff office seeking validation of a rumor that Hammett—a known Communist Party sympathizer—had somehow made his way into the U. S. Military, but they assured him there was no such serviceman. The fact was only confirmed in 1945. By that time, Hammett had been reassigned, and the magic of Adak was over. He returned to drinking and after a short time requested a discharge; he officially left the military in August 1945.