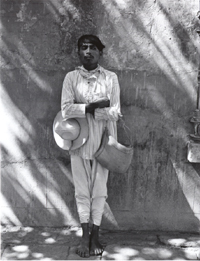 One of the most fascinating aspects of photography is how images change the way we look at the ordinary in the world. Manuel Álvarez Bravo, a master in transforming the everyday into extraordinary images, worked during one of the most important and transformative periods in the history of Mexico. He was a prolific photographer who lived for 100 years. During the 1930s and 1940s, his photographs laid bare a city that saw rapid urban changes that reshaped the face of Mexico. Álvarez Bravo’s unique vision is characterized by intimate scenes that fused local and international artistic developments such as geometric abstraction and surrealism. In 1929, Edward Weston wrote to Álvarez Bravo: “photography’s fortunate in having someone with your viewpoint.”

Their relationship would later develop into a friendship that also included Tina Modotti. The three photographers would work in Mexico and document a country that would capture their minds and hearts. When Modotti was deported from Mexico due to her political activities, she gave Álvarez Bravo her Graflex camera as a gift. It was Modotti who introduced Álvarez Bravo to Eugène Atget’s work, which would become an important influence for Álvarez Bravo.