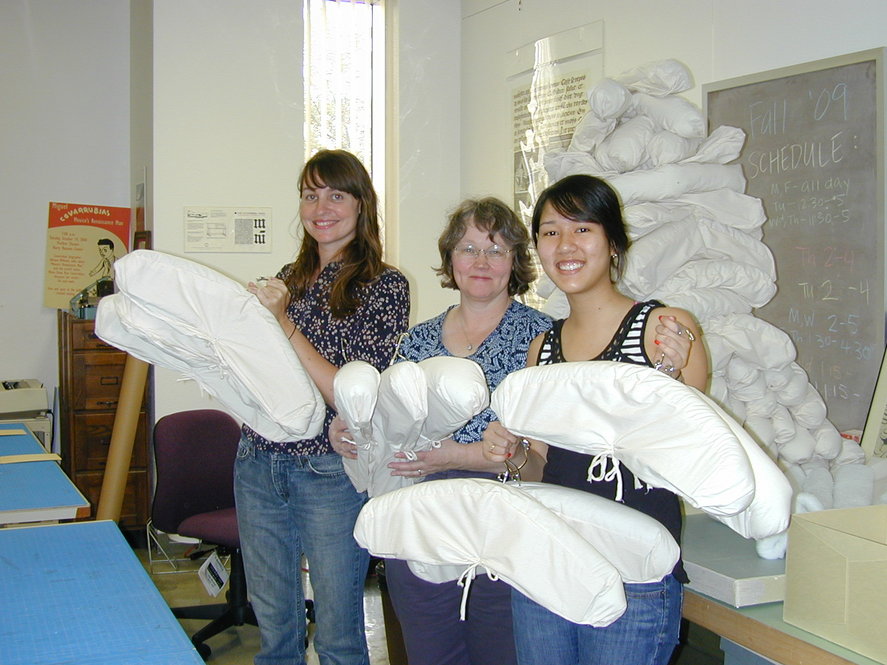 In a scene from the 1995 film Heat, Robert De Niro storms into Ashley Judd’s hotel room, grills her for answers, and knocks a line of wire hangers off the rack. According to Ashley Judd, detail-oriented director Michael Mann chose those particular metal hangers for just the right visual and sound effect.

“Robert De Niro had a lot of large, heavy coats. For one film, for example, he could have five full-length leather jackets. We had to have something that would be very sturdy and also very good for the textile,” says Apryl Voskamp, Preservation Housings Manager.

Before acquiring De Niro’s collection, the Ransom Center had few costumes to house and could afford the space to store the costumes in the ideal environment: lying flat and in the dark. But with thousands of costumes arriving in the De Niro collection, Helen Adair, Associate Curator for Performing Arts, and Jill Morena, Collection Assistant for Costumes and Personal Effects, inspected the costumes and deemed some costumes appropriate for hanging storage, including many of the jackets.

“It takes less space to store things hanging,” says conservator Mary Baughman. “Things like the leather jackets are pretty tough as long as they’re out of the light.”

The challenge was to find or make padded hangers appropriate for De Niro’s jackets.

“We didn’t have any hangers here that would work,” Baughman says. “Some of the De Niro costumes are pretty heavy, and the hangers we had here were too flimsy. And we couldn’t find a commercially made hanger that would work. There are a lot of archival quality hangers out there for your wedding dress, but for a big, heavy leather coat, not so much.”

The range of costumes worn by De Niro’s varied film personae created some unique circumstances for the team. For example, a large, heavy canvas coat worn by the swashbuckling, cross-dressing pirate Captain Shakespeare in Stardust (2007) was treated by the wardrobe department to look weathered and beaten by the elements. This distinctive costume “got an even more macho hanger,” according to Baughman.

The preservation team also decided not to hang certain jackets. For example, De Niro’s characters get shot, burned, or injured in many of his films, and Voskamp and Baughman were worried about hanging bloody jackets, many of them still sticky.

“I learned that fake blood is an industry secret,” Voskamp says. “Studios don’t want to divulge their recipe because they think it’s the best. It would be helpful to know what’s in the fake blood to know if it will damage other items, but that’s very difficult to figure out. So we decided to isolate these costumes and house them lying flat to make sure the fake blood doesn’t migrate onto other materials.”

Baughman is the mastermind behind the design. She searched for just the right hanger, eventually choosing a sturdy long-necked stainless steel hanger to serve as the main frame. The next step was to construct shoulder supports to cover the metal hanger which would prevent the metal from distorting the garment’s original shape.

“We didn’t want to have this sharp edged metal hanger up against the cloth of the garment. It would’ve left a mark in the garment. After a few years, the fibers will break along those creases,” Baughman says.

Baughman designed the shoulder supports out of lignin-free board. For decades, “lig-free” board has been used to create a variety of custom archival containers at the Ransom Center. Each piece of lignin-free board had to be cut, creased, and tied with twill tape to simulate the shape of human shoulders. The final component of the hanger was a padded cloth covering to go over the shoulder support. Each cloth covering has three parts: two cloth sides and a long cloth tube filled with polyester batting.

It took a team of seven—including Voskamp, Baughman, University of Texas work-study student Liz Phan, and four volunteers—one month to complete the project, spending the entire month exclusively making hangers. Each hanger took an hour and a half to construct for a total of 262 hours. For the Ransom Center’s preservation team, it’s worth getting hung up on the details.