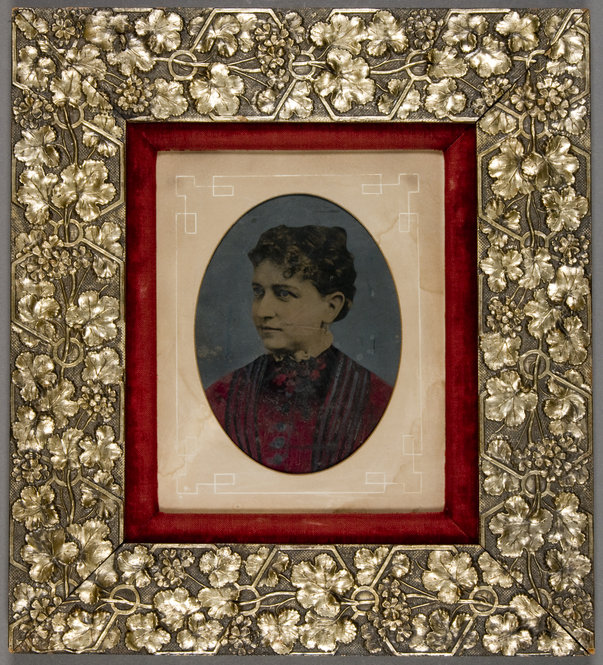 The Stanley Burns tintype collection is a remarkable and rare assemblage of unusually large, hand-colored, American tintypes in period frames. With more than 130 items, this is one of the largest collections of its kind.

Portraiture in America has a long tradition. In the colonial era, painted portraits provided a historical record of prominent figures, while miniatures and silhouettes provided more intimate records of family members. As the middle classes prospered in the early nineteenth century, painted portraiture flourished. With the invention of the daguerreotype in 1839, the face of portraiture started to change. The daguerreotype required one- to three-minute exposures, which were hard for people to hold, but as other photographic mediums were developed, such as ambrotypes and tintypes, photography began to replace painting as the standard technique for portraits.

Tintypes, like daguerreotypes, are one-of-a-kind photographs. There is no negative, as the image is exposed directly onto the substrate. The word “tintype” is, in fact, a misnomer, as iron, not tin, was used as the substrate. The tintype process was faster, cheaper, and produced a more accurate depiction than a painting, which led to its rise in popularity, especially with the middle and working classes. The necessary equipment and chemistry were portable and thus allowed photographers to travel, providing access to people in rural areas and to Civil War soldiers.

The Burns collection consists almost entirely of portraits, many of which are of individuals, including paired sets of husbands and wives. Additionally there are family portraits, some of which are “composite” images where the photographer reproduced earlier portraits of individuals into one group portrait, a method often used to include deceased family members. There are also many portraits of children, including post-mortem photographs of infants. Portraits of African-Americans and people in trade uniforms exemplify how photography helped democratize art by making it accessible to lower and working class citizens.

The tintypes in this collection are all painted, either with oil paints or watercolor. Some are painted heavily in a folk-art style while others have only minimal colorization. Tintypes were not usually painted, but doing so placed them within the tradition of painted portraiture and thus closer to being fine art. Painting them also made up for the poor contrast of tintypes and could make them appear more life-like. Most commonly, tintypes measured about two by three inches and were housed in paper display folders, but the ones in this collection measure six by eight inches or larger and are displayed in elaborate frames, another practice that helped raise the status of the photograph to fine art.

The frames in the collection are of equal importance to the photographs, and they represent a variety of styles—from the plain to the elaborate—and date from 1840 to 1910. Renaissance revival and federal revival styles are simple and elegant; rococo revival frames include scrollwork and flower motifs. Many frames in the collection are Eastlake style, named for the nineteenth-century British architect and tastemaker Charles Eastlake. These consist of ebonized or marbleized wood with incised geometric patterns. Aesthetic style frames, also well represented in this collection, are distinguished by the clarity of their molded designs with motifs inspired by nature. The collection also includes frames in tramp art and rustic styles, which are more simply decorated, carved-wood designs. The range of styles from simple wood constructions to elaborate gilt moldings reveal the social status of each photograph and, by extension, the subjects.