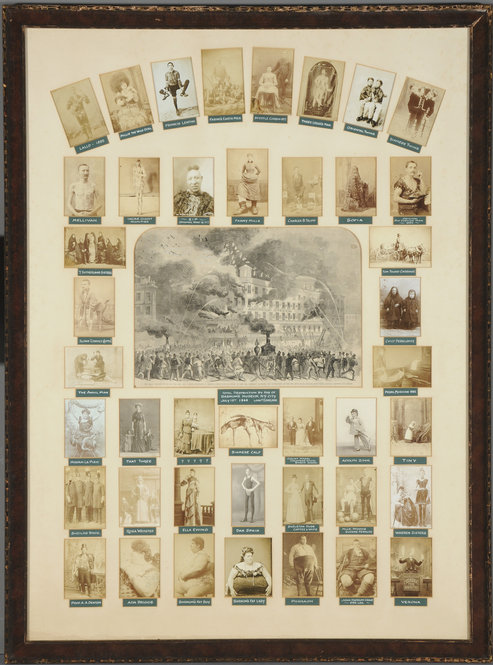 Barnum loved that his birthday followed the July 4 holiday, and in his first autobiography, The Life of P.T. Barnum, Written by Himself (1855), he wrote, “Independence Day had gone by, the cannons had ceased to thunder forth their remembrances of our National Anniversary, the smoke had all cleared away, the drums had finished their rattle, and when peace and quiet were restored, I made my début.” Such theatrical prose was typical of the man who entertained the American public for nearly 80 years.

While many associate P. T. Barnum with the circus, a unique framed composite grouping of 42 cabinet cards from the Albert Davis collection of theater memorabilia showcases Barnum’s American Museum. Collector Albert Davis (1865–1942) compiled the piece in the early twentieth century.

Barnum opened his American Museum on the corner of Broadway and Ann streets in New York City in 1841. Over the course of 24 years, he amassed a collection of more than 850,000 items, only to see his vision burned to the ground. The engraving in the center of Davis’s composite shows Barnum’s museum engulfed in flames on July 13, 1865. Undeterred, Barnum reopened at a new location on Broadway and Canal streets just eight weeks later with a new collection of 100,000 items. When his second location burned to the ground in 1868, he moved away from his museum career to a new calling with the circus.

Barnum offered many of the same exhibitions in the circus as he did in his museums, including displays of wax figures, animals (both dead and alive), and human platform performers, referred to at the time as “freaks.”

Platform performers typically lived on the top floor of the museum and performed, on average, 10 to 15 times per day. Their salaries ranged between $25 and $500 per week, depending on their talents, but they also had an opportunity to make an additional income selling souvenirs such as the cabinet cards seen in this composite, though the profits were split between the museum and the performer.

Curiously, given the central image of the museum, only a few of the performers seen in these cabinet cards were actually associated with Barnum’s American Museum. Most notably we see the picture of Zip the Original What Is It? directly above the engraving of the museum, and the photograph of Tom Thumb’s Carriage in the right column. Both Zip and Tom Thumb were among Barnum’s most famous exhibitions.

Others performers that Davis identified in the group, including Lallo (actually Lalloo), Francis Letini, Farini’s Earth Men, Myrtle Corbin, the Original Pin Cushion Man, the Pedal Musician, and the Oriental Twins, did not work at Barnum’s museum. In fact, some of these performers were not even born when the museums were open. Davis’s composite, though somewhat misleading, is an apt tribute to the history of popular entertainment and a reminder of the importance of Barnum’s Museum as a predecessor to the circus.

A small case of materials from this collection is on display outside the reading room on the second floor of the Ransom Center this month.