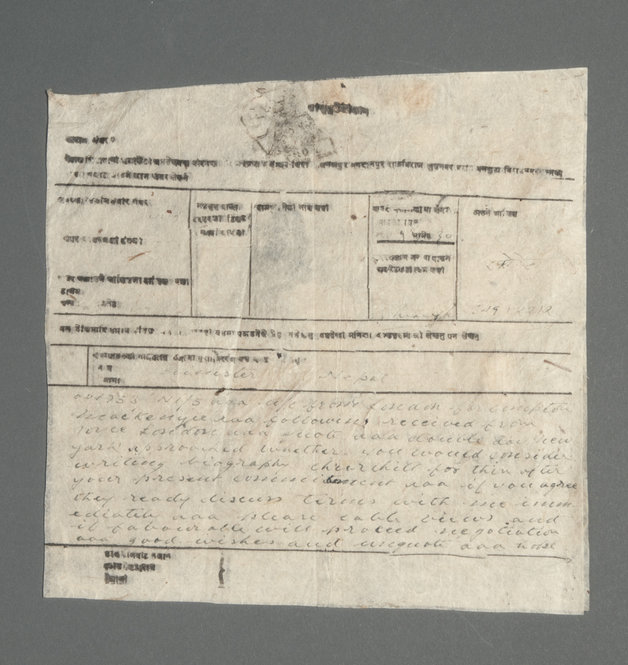 A recent project to reorganize some materials in the papers of British author Compton Mackenzie (1883–1972) brought to light specimens of traditional Nepalese handmade paper serving in a most prosaic capacity.

During the late 1920s and early 1930s, Mackenzie travelled widely and at one point was contacted while in the remote Himalayan kingdom of Nepal by a London publisher. The message from London arrived via New Delhi, India, in the form of a telegram and asked if Mackenzie would consider a “biography of Churchill” upon completion of his present commitment. Unless the biography sought was to be a brief piece for a newspaper or periodical, it would appear it was never written by Mackenzie.

So, in a sense, the telegram was just one more of those numberless pieces of paper that the active life of a published author produces, and a creative dead end at that. But this telegram was very different from most others in that it was written out on paper unlike any I have ever seen.

The form was printed in Devanagari script on two sheets and was accompanied by three more unused blanks. The paper is called lokta and is prepared by hand from fibers obtained from the bark of the Nepalese lokta tree (Daphne cannabina). While lokta paper manufacture requires much the same general techniques as traditional Western handmade paper, the present specimens exhibit a faint but uniform criss-cross design when held up to the light rather than the distinct chain-and-wire lines of their Western equivalents. The finished product is said to be durable and resistant to insect damage.

The sheets in the Mackenzie papers are remarkable for their texture and appearance, exhibiting bits of bark and small twigs worked into the fabric of the paper, dramatic whorls of lokta fiber here and there, and even occasional voids in the paper’s surface. The paper is a mottled pale tan in color and more nearly translucent than opaque. It seems to have been lightly treated during manufacture with sizing, so has a feel more like cloth than traditional paper. The effect is at once one of extreme primitiveness of technique, and yet, at the same time, one of remarkable beauty.

A web search provided several brief histories of lokta paper, which indicate that it was employed by the Nepalese government until the 1950s for its official correspondence and that it continues to find a role there in the preparation of certain classes of documents. Use of the paper is on the decline in Nepal as it is being displaced by conventional machine-made papers, but there is a substantial international market for it among those attracted by its remarkable texture and appearance.