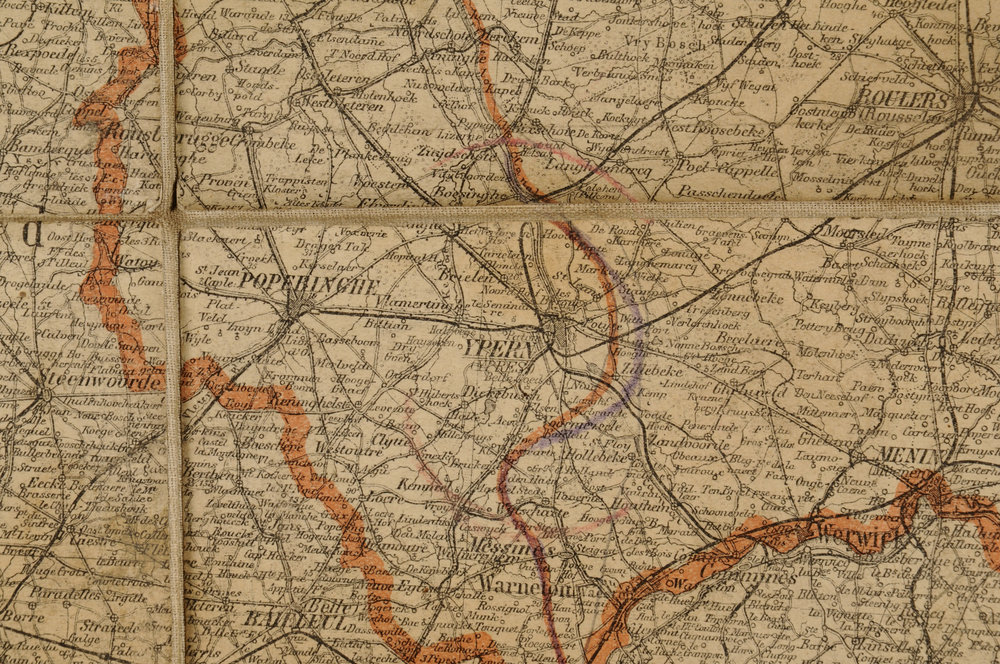 Within the Ransom Center’s extensive collection of papers of British author and poet Edmund Blunden (1896–1974) is a group of printed maps. These maps came into Blunden’s possession during his service as an officer in the Royal Sussex Regiment during World War I. Most of the maps are British Ordnance Survey trench maps detailing various sectors in southwestern Belgium in the vicinity of Ypres and are what one might expect to find among the papers of an officer veteran of a conflict. One, however, differs in that it was acquired by then Lt. Blunden in the village of St. Julien under unusual circumstances.

On this map he has written “German map brought back by me from pillbox near St. Julien in the battle of July 31, 1917.”

That day was the first of the campaign known as Third Ypres or, by a name having special resonance, as Passchendaele. The village of St. Julien is about four miles northeast of Ypres on the road to Langemarck and Poelkapelle and was one of the first objectives taken by British troops in a campaign intended to build upon the success of the earlier battle of Messines Ridge, fought the previous June to the immediate south of Ypres.

As is so often the case in war, the early expectations of success eluded the planners of the offensive. Field Marshal Douglas Haig’s belief the that German army was near collapse proved illusory, and the hope of achieving a decisive breakthrough faded as the campaign wore on. Eventually the capture of the village of Passchendaele, seven miles east of Ypres, and a low ridge just beyond was settled on as a realistic culmination. When Canadian troops took the heights on November 9, 1917, the campaign came to an end, and an Allied victory was declared.

The map Blunden saved from the German bunker is a commercially published map in a scale of 1:300,000, issued by the firm of L. Ravenstein of Frankfurt am Main. Despite its title of Kriegskarte von Belgien und angrenzendem Frankreich (War Map of Belgium and Bordering Areas of France), it appears to be an undated wartime reissue of a conventional prewar political map. It has been updated by overprinting in red indicating “fremde Festungen” (foreign fortresses) and “ungefähre Frontlinie” (approximate frontlines).

The Blunden copy has further been cut into panels and mounted on cloth backing. It has one correction to the “front lines” done in graphite pencil, and, oddly for a map apparently in use in late July 1917, the area from Messines to Wytschaete taken by British forces in the struggle for Messines Ridge nearly two months earlier still appears on the map as a German salient.