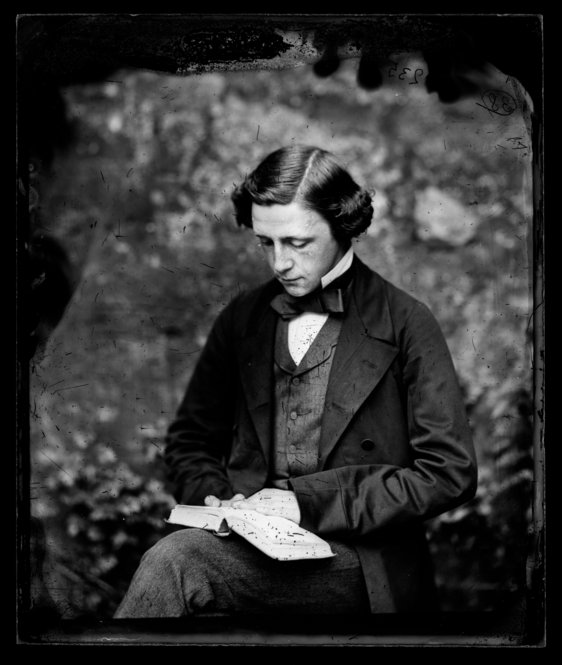 Lewis Carroll is synonymous with Alice in Wonderland, his 1865 novel of nonsensical imagination that cemented his reputation as a visionary author and captured the hearts of children and adults alike. Carroll’s literary creation, immortalized through Disney movies, is well known. What is less known, however, is Carroll’s life as an avid photographer.

Carroll’s forgotten hobby was not rediscovered until 1949, 50 years after his death, when collector Helmut Gernsheim was offered an original album of photographs taken by Reverend Charles Lutwidge Dodgson. Dodgson, of course, was the same man who published under the pseudonym Lewis Carroll. Gernsheim poured his energy into discovering more of the photographer, “for quite frankly” as Gernsheim recalled “until then, Lewis Carroll, photographer, had been a stranger to me.”

“I consulted the leading histories of photography and studied the photographic literature of the last century for information,”‘ wrote Gernsheim in his book Lewis Carroll, Photographer. “I sought it with thimbles, I sought it with care, I pursued it with forks and hope, but Dodgson’s name and his pseudonym remained as elusive as the Snark.”

Gernsheim sent his wife to compare the distinctive purple ink and handwriting in the album with Lewis Carroll manuscripts in the British Museum. After a meticulous search, Gernsehim contacted Dodgson’s living descendants, historians, and photographic subjects. The Gernsheims were able to track down and acquire four more albums for their collection, which are now part of the Ransom Center’s collections.

Dodgson pursued photography for 24 years between 1856 and 1880. The album was Dodgson’s chosen medium to present and preserve his photographs of family and friends. Like most photographers of his day, Dodgson used the wet collodion negative processes and the corresponding positive albumen print processes.

The complicated process involved setting up a cumbersome tripod camera and posing the sitter in an aesthetically sensitive manner. Dodgson always took great aims to ensure a relaxed atmosphere, which was not an easy task because posing for extended periods of time tended to produce static, formalized portraits. Next, the photographer would coat and sensitize a plate of glass in a makeshift darkroom. Then, the photographer would quickly transport the light-sensitive “wet plate” to the camera and make an exposure upon it. Finally, he would return to the darkroom to promptly develop and fix the exposure before the plate could dry to complete the negative process.

Dodgson favored the albumen print, which allowed the dried wet collodion negatives to be placed in contact with sensitized paper surface and printed. A binding solution composed of processed egg whites held light-sensitive silver salts onto the coated surface of a thin sheet of paper and resulted in lustrous prints with broad tonal ranges.

Though only a hobby, Dodgson demonstrated genuine skill while utilizing the wet collodion negative processes and the corresponding positive albumen print processes, both of which required patience and dexterity to master. Dodgson’s skill is easily visible in his photographs, which convey a broad range of emotions.